As the U.N. International Day of Rural Women on Oct. 15 spotlights the key role women play in the dynamic economies of the developing world, you may see some striking statistics and platitudes on the topic. These are meant to highlight the inequality and discrimination rural women around the world face, and inspire us to recommit to advancing their rights and agency.

There's just one problem: many factoids about the noble struggles of rural women in developing countries aren't true.

These widely circulated myths do contain a kernel of truth: in general, rural women work hard, with fewer resources at their disposition than men. But despite the good intentions behind them, they promote stereotypes of women as either victims or saviors, and hinder the design and implementation of programmes that can concretely advance women’s opportunities on the ground.

Here are three common myths about rural women around the world:

Women are indeed important producers of food who are frequently undercounted in agricultural labor statistics. Though men and women often have different farming tasks (sometimes producing different products within the same household) they also often work together, so neither labor nor food production can be easily measured by gender. For example, if a husband ploughs, a woman weeds, both harvest, and the woman sells, how much of the resulting harvest did each produce? 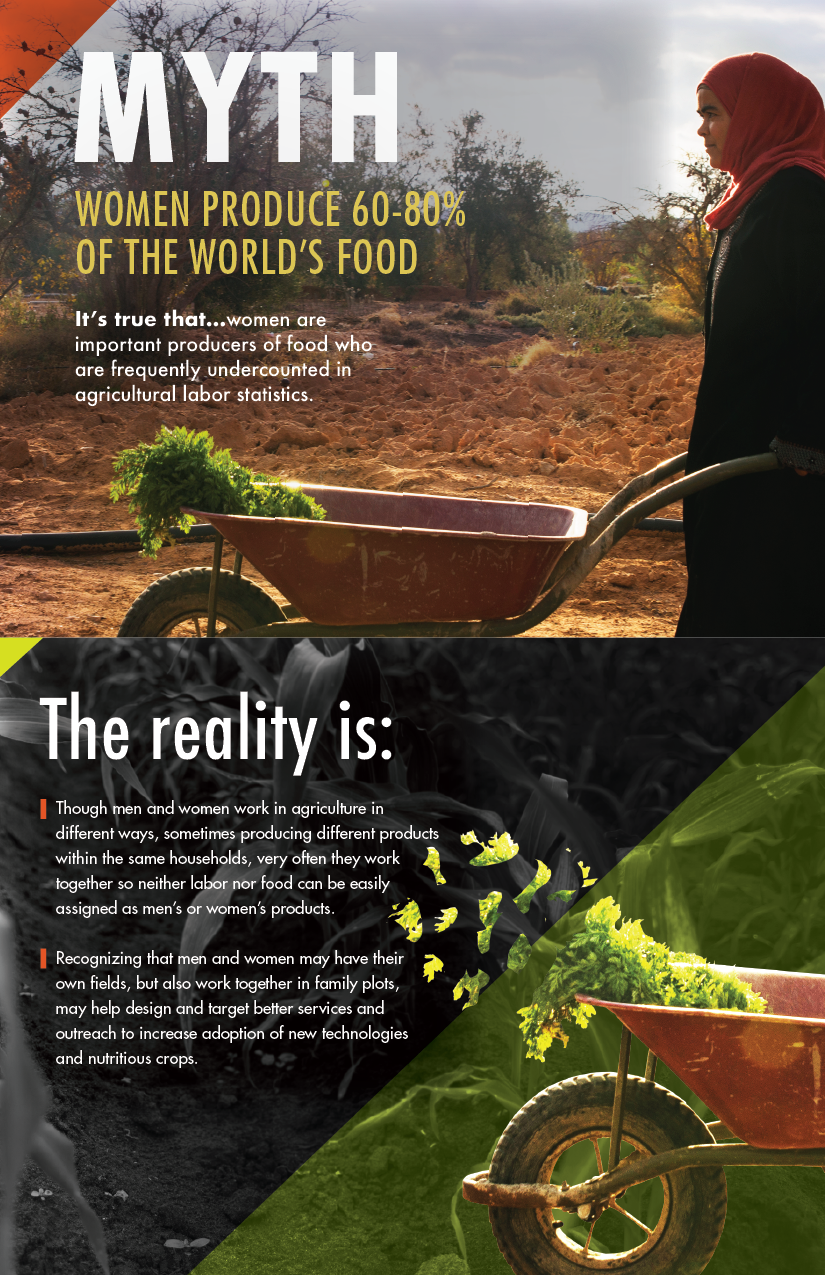 Understanding these complex realities is essential to improving the lot of rural farmers of both sexes. If you want farmers to adopt new technologies and more nutritious crops, it helps to recognize that men and women may tend their own fields, and also work together in family plots. In Uganda, for example, adoption of nutrient-enriched orange sweet potato was highest on plots that were owned jointly, but where women had the primary decision-making power on what to grow.

2. Women own 1 percent of the world’s land

Patriarchal gender norms in families, communities, laws, and markets restrict women’s ability to purchase, inherit, or defend ownership of land in most parts of the world. But there is no clear, universal definition of land “ownership” for women, nor any data available that justifies such a low number. The data shows that in sub-Saharan Africa and Asia, across multiple measures of land ownership women own less land, and have less secure rights over land, than men. While many women do have claims to land under customary tenure, their legal rights are much weaker than men’s. 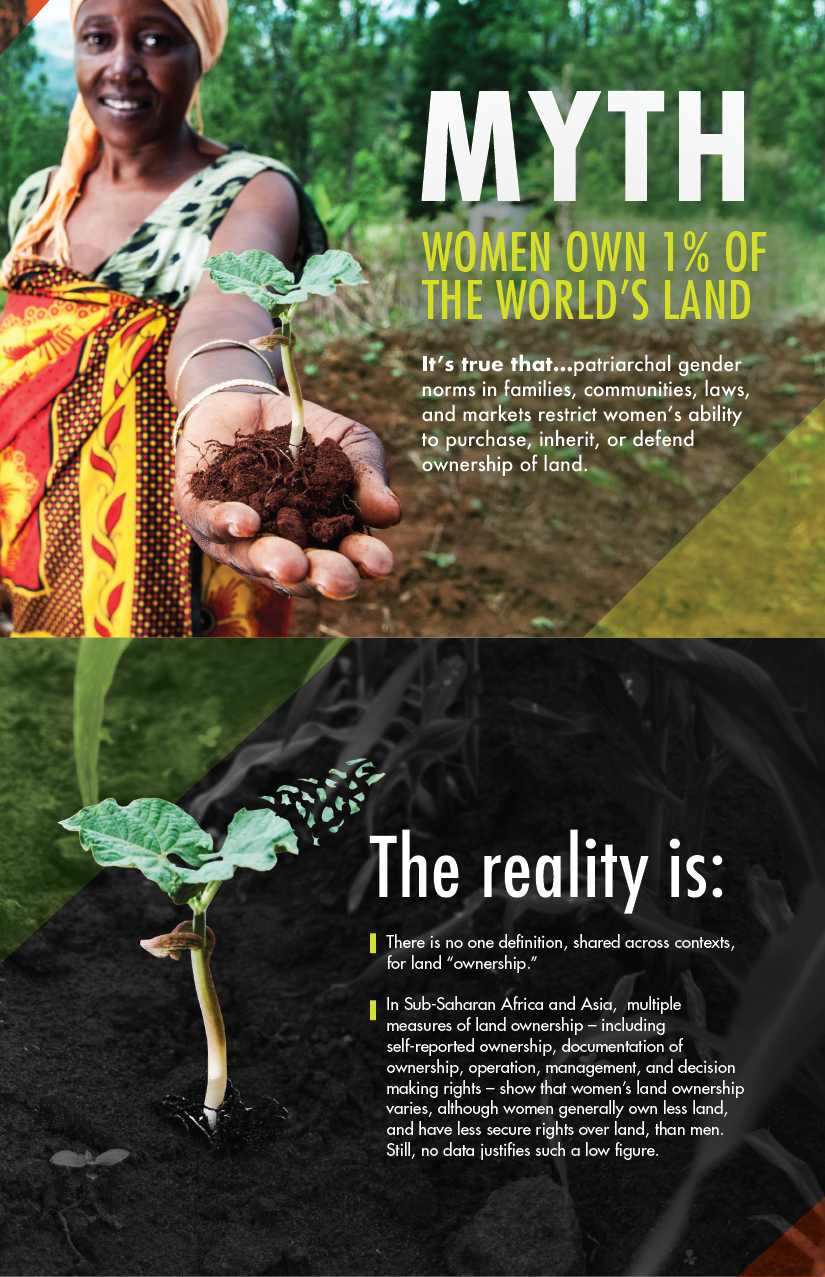 But underestimating women’s land ownership does more harm than good. If governments and aid organizations think virtually no women own land, they may not target the ones who do for assistance. They might also not bother to raise women’s awareness of their land rights, which are key to their bargaining power at home and within their communities. In Ethiopia, for instance, the revision of the Family Code and extensive community-based land registration strengthened women’s land rights. Daughters of Ethiopian women who perceived that their rights improved after divorce were more likely to do better in school than their peers.

3. Women are better stewards of the environment

Because of women’s traditional roles such as gathering firewood, collecting water, and managing agriculture, ecological degradation and climate change hit them disproportionately. So they do have incentives to conserve resources. But the picture is more complicated. Other factors also influence conservation behavior, such as land rights, and access to information, capital, and enforcement power. Women are less likely to have those resources.

Believing women are the linchpin of conservation leaves them shouldering too great a burden. Often, they’re sidelined in community-level decision-making about natural resources. Conservation efforts that involve both men and women tend to be more successful: in Bangladesh, compliance with rules regulating fishing in protected areas is better when both men and women are involved in fishery management groups.

The persistence of these myths helps to embellish an image of the rural woman as a victim instead of an agent of change. A close look at the evidence shows that rural women are farmers and entrepreneurs, investors, and partners with men. Governments and international organisations must design programmes and policies that fit the realities, not the myths.

Ruth Meinzen-Dick and Agnes Quisumbing are Senior Research Fellows and Sophie Theis a Research Analyst at IFPRI. This post was published originally by Thomson Reuters.