Land in Tanzania is a scarce resource without which life cannot be sustained (FAO, 2007), and it is “increasingly recognized as an important governance issue” around the global (Palmer et al., 2009, p.1).  Hundreds of millions of people including farmers, herders, forest dwellers and agro-industries all rely on land resources for their survival. The capacity of households to produce, and thus enjoy decent living standards, is conditioned by their security of land rights. Given that the development pressures on land is increasing especially in rural areas security of land rights especially for women and marginalized groups must be well recognized in order to achieve efficient allocation of land uses among the rural households and promote investment on land for sustainable development (Holden & Otsuka, 2014).

Tanzania remains an awesomely agrarian country, with more than 75% of Tanzanians living in rural villages and over 80% deriving their livelihoods from agriculture and pastoralism. Economic development policy prioritizes supporting smallholder agriculture and increasing the linkages between rural livelihoods and macroeconomic growth (Sulle &Nelson, 2009).

Legal and policy frame work on women’s right to land

Women’s social economic and political rights are provided for and secured within the constitution of URT which is the basis of all the citizens’ rights. The URT constitution of 1977 clearly spells out women rights by first prohibiting discrimination on whatsoever ground and emphasizes equality of all persons. The Land Act No. 4 of 1999 adequately guarantees women to access, own, and control land as equal as men. It also provides for the right to participate in decision making organs regarding land matters, and right to dispose land and properties therein. In addition, the Village Land Act No. 5 of 1999,  recognizes equal rights for men and women to access, own, control and disposition of land under the same terms and conditions (section 3(1&2)). Section 20(2) protects women against discriminatory customs and traditions which restrict their lawful access to ownership, occupation and use of land.

However, regardless of legal and policy protection of women’s rights to property including land, the reality on the ground is different. In most cases, majority of women have access to land through their spouses or male relatives but not to own as individual female.

Moreover, the use or recognition of multiple laws such as customary laws, Islamic laws and statutory laws creates a room for inequality in land ownership, use and access for women through inheritance.

In inheritance practices, overall, 80 percent of the ethnic communities in the country follow a patrilineal system of inheritance and the remaining 20 percent have matrilineal inheritance practices (UN Habitat, 2002). Generally, in patrilineal communities, widows are entrusted with the land they cultivate or on which they live only until their children become adults. They are therefore expected to use the land but later pass it on to the children (FAO. 2008). If there are no children, land is inherited by male relatives responsible for taking care of the kids (National Land Use Planning Commission (NLUPC, 1998). Regardless of the will that the deceased may leave in favour of the widow or her children, clansmen can decide that the widow leave her deceased husband’s household. This happens when the widow marries again, if she did not have any children with her deceased husband or if her children are very young, implying that the widow is more likely to marry again (FAO 2008). The fact that “once married women leave the clan” has been pointed out as the reason why women do not enjoy ownership of land. Majority of women in many parts of the country have the right to use land but not to make decisions over it. 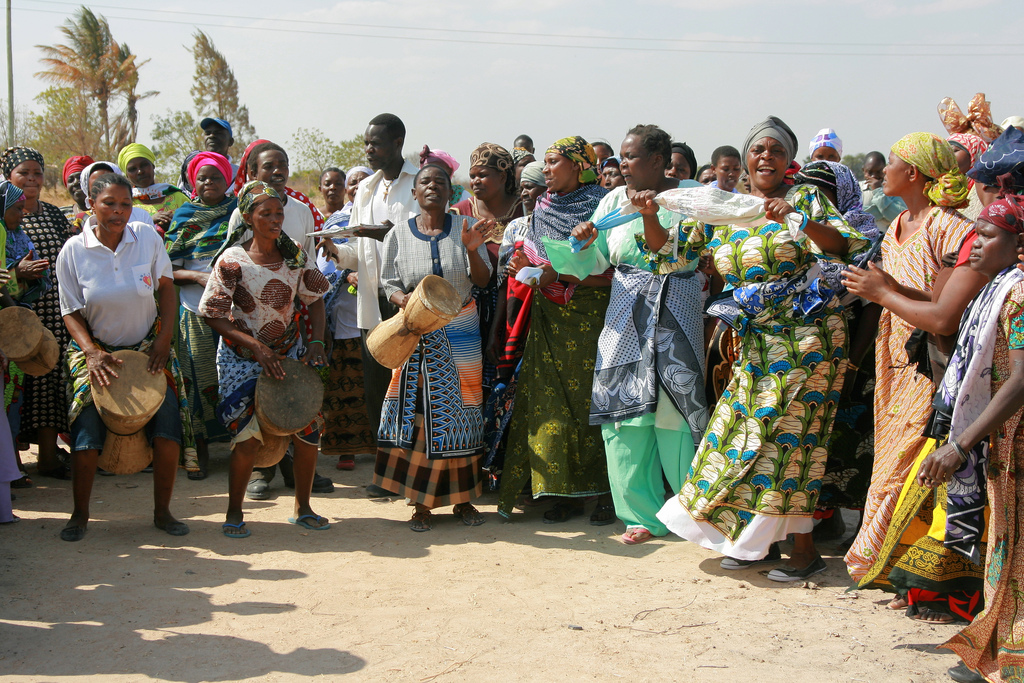 The Sejeseje group of the Tanzania Federation of the Urban Poor, composed of mostly poor women living in slums, celebrates the purchase of six acres of land in Dodoma, using their own savings, before they start building their houses. (Photo by Rémi Kaupp)

More than 75% of the Tanzanian depend on land as the means of livelihood, and majority of these are women leaving in rural areas where agriculture and pastoralism is the main economic activity. However, with an increasing demand on land for investment and other “development” activities, the pressure leaves rural communities with uncertainty of their tenure security. These uncertainties coupled with some of the culture and traditions discriminating against women doubles the fear among the female population, especially those in rural areas.

The 2030 Sustainable Development Goals agenda signed by world leaders all over the world aims to create a more just future. The most important driver for the achievement of the agenda are community members  and their  ability to access, own, make decisions, and control  natural resources including land and its produce for their own benefit and generations to come. For a country like Tanzania with majority of its citizens depending on land, secured tenure rights for its people is the most important channel to achieving the SDGs.

Women in subsistence farming produce between 70-80 percent of their families' food supply and therefore feed the nation. Therefore, if majority of these   women do not have the right to inherit land, it equals to women not being able to profit regardless of their workloads and despite their bloodline. This conduct is responsible for women remaining poor and production in this way is held from reaching its potential, when only half of population is able to take part in the agricultural development. This conduct has implication on goal number 1 of ending poverty in all its forms, goal 2 end hunger and achieving food security, and goal 5 to achieve gender equality and empower all women and girls. Land for women is one of the most crucial resource to their living conditions, economic and social empowerment, and struggle for equity and equality. Tenure security empowers women and other marginalised communities to confidently engage in sustainable economic activities. For example, in one of our meetings with women groups (and men ) one woman from Iringa said, “ now that I have my title with me nothing can hold me back, I have no fear of working up one day landless” (paraphrased). For most women, land being the only source of income secured tenure provides identity and sense of belonging. Tenure security assures them and their children or dependants of a bright future, provides options and alternatives in their lives. Tenure security speaks volume beyond demarcation of land but a bridge between uncertainty and certainty of their future.