Investigate, Expose and Advocate: Stopping illegal environmental destruction and violence against human rights defenders | Land Portal
Skip to main content
Global
Land & Corruption
advocacy
agriculture
community land rights
compulsory acquisitions
corruption
expropriation
extractive industries
land acquisitions
land grabbing
land rights
land rights activists
mining
We are facing challenges in our collective efforts to ensure that land rights are respected around the world. We are fighting the odds with ever more powerful companies and governments surrounding us. And these forces are all too often working in collusion to drive business forward with a profit at any price mentality  -- and at the expense of human rights and the environment.

Nobody knows this better than those who are working on the frontlines. Civil society activists and media organisations are under attack all around the world. Governments are increasingly demonstrating their willingness to use laws, surveillance and violence to clamp down on those who defend their rights against the odds.

But all is not lost. Together, I believe that we can win in the David and Goliath battle confronting us -- and protect the planet which we all depend on for our survival.

For those of you who don’t know us, Global Witness is like a worldwide detective agency pushing for substantial reforms in the natural resources sector.  We investigate, expose and advocate to end the corruption, human rights and environmental abuse all too often associated with agribusiness, mining and the oil and gas industry.

Back in 1995, the co-founders of Global Witness went undercover to expose how the flow of illegal timber pouring across the Thai-Cambodia border was funding the violent conflict going on at the time. By exposing the illegal timber trade in the international media and pressuring key targets in the US government, Global Witness was able to close the border timber trade and thereby deprive the genocidal Khmer Rouge of $90 million dollars a year which was an important contribution to ending the conflict.

Global Witness has continued to expose the harms caused by the illegal timber trade and those that profit from it ever since.  And over the 25 years since that investigation, we have been working hard -- not only to stop wide-spread illegal environmental destruction, but also to highlight the violence against communities caught in the cross hairs of land grabbers.

Beyond the headlines, we use our exposés to drive campaigns that hold companies to account – and change the laws that regulate them. It is this model of investigate, expose and advocate that has helped us achieve our biggest successes. 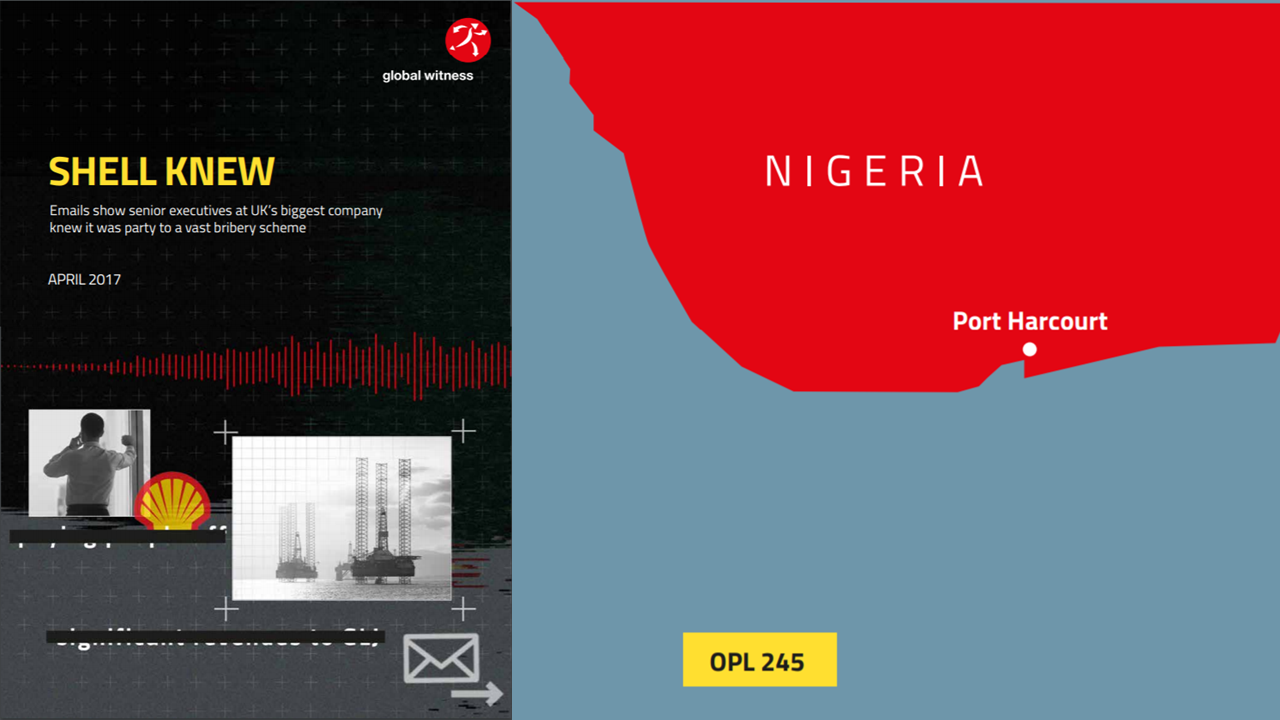 Years of painstaking Global Witness investigation have revealed how one of the world’s biggest oil companies - Shell –and the Italian oil company ENI - paid 1.1 billion US dollars in a murky deal for a lucrative oil block off the coast of Nigeria.  Global Witness tracked down documents showing that this $1.1 billion didn’t go into the Nigerian government treasury as it should have.  Instead it went to convicted money launderer and former oil Minister, Dan Etete, who had awarded himself ownership of the valuable block in 1998 via a company he secretly owned called Malabu Oil and Gas.

For years, Shell denied any wrongdoing when faced with our reports. But in 2017 Global Witness we got hold of the proverbial smoking gun – emails that proved that Shell knew that the money they had paid would be diverted to Etete.  As a result of Global Witness’ revelations, senior former Shell and ENI executives and the companies themselves are now facing aggravated criminal charges in a trial in Italy.

In fact, just last week two of the middlemen in the OPL245 scandal were sentenced to four years in jail and ordered to return over $100 million dollars. And the Italian trial is just getting started. There is a parallel investigation in Nigeria itself where the case has had huge political ramifications, and we have been in touch with several other jurisdictions that are contemplating filing charges.

The Italian criminal trial is a major step towards accountability -- showing that western oil companies cannot act with impunity as they rake in massive profits, threaten our climate and defraud national treasuries of the money developing economies need to thrive.

This is also a victory for the global transparency movement which Global Witness helped to found shortly after it started. For example, the OPL case proved decisive in defending US and European Union transparency laws which force oil, gas and mining companies to publish the payments they make to foreign governments on a project-by-project basis.  These publish what you pay laws mean that citizens like you around the world can finally follow the money paid by oil and mining companies into your government’s treasury and hold your leaders to account for how it is spent.  We just published a handbook explaining how to do just this. 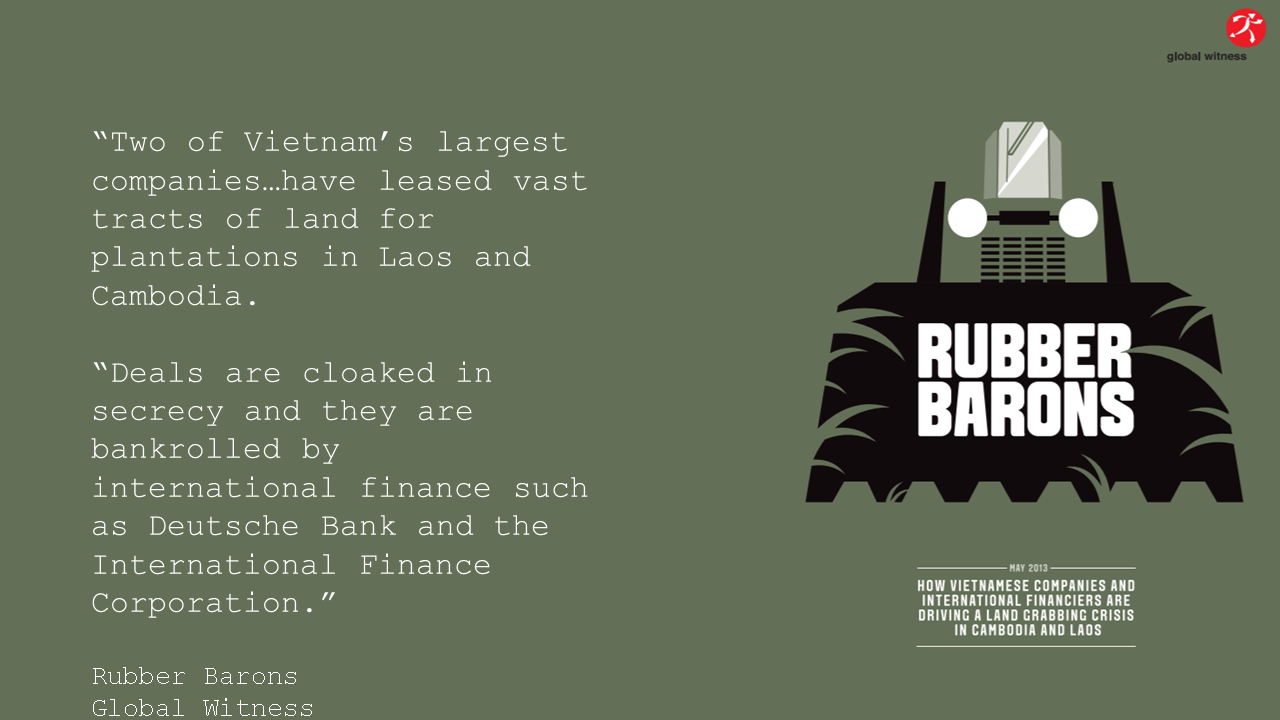 Following an 18-month investigation in 2013, Global Witness published our ‘Rubber Barons’ report which exposed the role that two Vietnamese rubber companies -- and their international financial backers such as the International Finance Corp or IFC --  had played in land grabbing and in the destruction of forests in Cambodia and Laos.

We worked closely with our local partners in Cambodia to document the violence against the communities and the damage done to the environment by these internationally financed rubber companies.  We were able to generate substantial international media coverage both in Southeast Asia, and in Europe and the US, where the financiers such as Deutsche Bank and the IFC are based.

Following publication of our Rubber Barons report, we met with the companies to push them to make amends and compensate the affected communities, with limited effect.  Then we supported complaints to both the Forests Stewardship Council and the IFC. As a result, one company was thrown out of the Forests Stewardship Council and the other was forced into an IFC-led dispute resolution process with local communities.

But it still wasn’t enough to do justice. So we turned our attention to the financial backers, and wielded the media coverage we had generated in our arguments. Eventually, both the IFC and Deutsche Bank pulled their money of the projects, creating a powerful disincentive for those companies and others seeking financing to grab land in the future.

Then --- kind of like a dog with a bone really -- we went after the ultimate buyers of the rubber, the world’s largest tyre manufacturers, urging them not to buy rubber from plantations like those we had exposed in our report.  Vor the past several years we have worked with each of the world’s five largest tyre makers on their rubber procurement policies – companies like Pirelli, Michelin and Goodyear.  As of today, all five of the major tire companies we worked with have committed to zero-land grabbing and deforestation in their supply chains.  Their newly developed procurement policies require that the model of Free Prior and Informed Consent from communities is followed for all new plantations in their supply chain. 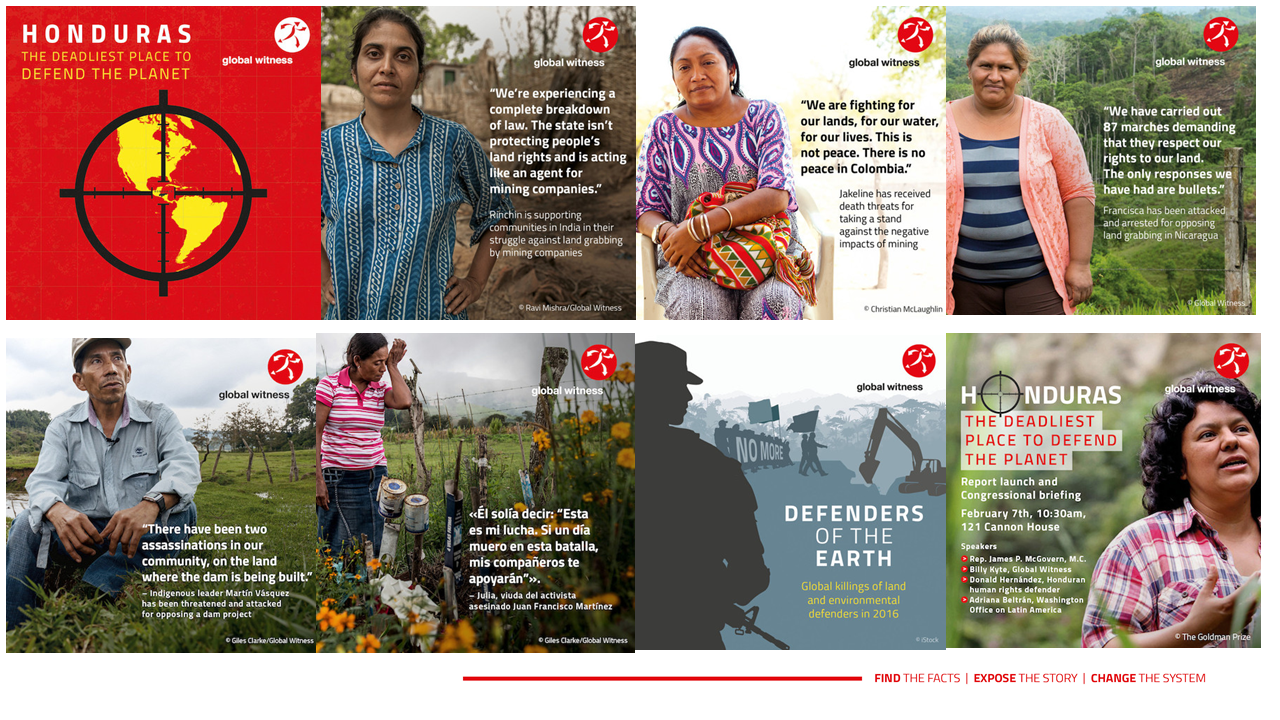 Our work on environment and land defenders

Communities around the world are facing the impact of the land grabs at the sharp end of these large-scale business projects. They are on the frontline of land and environmental defence.  They are defending not only their land and their homes, but also taking a stand to protect our climate, environment and ecosystems for generations to come.

Through our Defenders campaign, we broadcast the stories of people around the world who are killed standing up to developers and fighting for the rights of their communities. As the scramble for land and resources intensifies, inevitably and tragically there are more and more of these stories to tell.

Our annual reports and online collaboration with The Guardian newspaper have proved hugely successful in generating coverage around the world, with hundreds of newspaper articles, radio and television stories every year. The Guardian partnership in which they feature our data on killings on an online map and commission journalists to research some of the incidents we identify with our global network of partners - has helped push the issue further into the spotlight.

But media coverage is not enough.  Our Defenders team has worked with allies around the world to turn that visibility into impact. And today there is some cause for optimism, with governments, financiers and companies beginning to take action. For example, working with our allies around the world, we pressured the Dutch and Finnish development banks responsible for the deeply controversial Agua Zarca hydropower dam in Honduras to withdraw their backing for the project.

The Agua Zarca dam was the project linked to the violent murder of acclaimed land defender and indigenous leader Berta Cáceres. The banks’ recent decision to withdraw funding followed years of pressure and brave struggle by COPINH, the indigenous movement formerly led by Cáceres, along with Global Witness and other national and international groups.  The withdrawl of the financing for the dam also helped drive progress on Cáceres’ murder case. The head of the dam company, who we exposed in our investigative report as having connections to Honduran military intelligence, was arrested on the second anniversary of Berta’s death for being one of the “intellectual authors” of her killing.

We’ve also had success in setting international standards for the steps that states and businesses should take to protect land and environmental defenders. We provided advice on the UN Environment Program’s landmark policy, and fed into the UN Special Rapporteur on Human Rights Defenders’ report on risks faced by land and environmental defenders. But we want to do more -- and we must -- to use the publicity our defenders campaign generates to force the companies and investors that are driving the land grabbing and pollution around the world to start protecting people’s rights.

We want to help activists and their local allies to tell their stories in the international media, uncover the crimes at the heart of the deals, and drive campaigns that hold companies to account wherever they come from, and wherever they operate.

And we can’t succeed without the partnership of civil society organisations that are fighting on the front lines.

So here are some recommendations, and the ways we can become more than the sum of our parts.

First, relevant organisations should join the newly forming ‘Defend the Defenders’ coalition. Our first meeting in Mexico in October of 2018 aims to shape a protocol for responding to attacks that we can all sign onto.

Second, help us end these killings by:

The truth is that these laws aren’t worth the paper they are written on unless they are followed, and they won’t be followed unless we ensure there are serious financial, legal and reputational consequences for breaking the law.

Finally, please join our global network of eyes and ears on the ground to help us ensure all killings of land and environmental defenders are revealed.

This blog is based on Gillian Caldwell’s Keynote Address at the Global Land Forum 2018.