The ‘age of ignorance’

For a long time land governance, land tenure and land rights remained in the ‘age of ignorance’.  We have known for some time that land governance is a key ingredient for social, economic and environmental development; what was missing, however, was the data.  With the little information available to us at the time, we set priorities and crafted interventions for our course of work. Relying on a few rough figures meant that we were often repeating mantras and slogans based on loose, rather than on hard and reliable facts.  Most notable among these was the often repeated and now widely disputed, “women own 2% of the world’s land”.

The ‘age of data’

And yet, things have changed today. As the land governance community experiences the global Big Data Revolution, we have now moved to and can benefit from the ‘age of data’. We have an unprecedented amount of data, with new sources and updates available to us on a daily basis. Since there is no such thing as “perfect data”, these data sources come with limitations. There are still important data gaps and the picture we get from existing data is often incomplete in terms of spatial and time coverage, but also in terms of specific aspects of land governance and land reform processes that are hard to capture and measure. In addition, incorporating the available figures into policy and decision making, translating the data into concrete targets and estimating how much it would cost to achieve these targets are not easy tasks. This being said, data on land governance has never been so abundant. 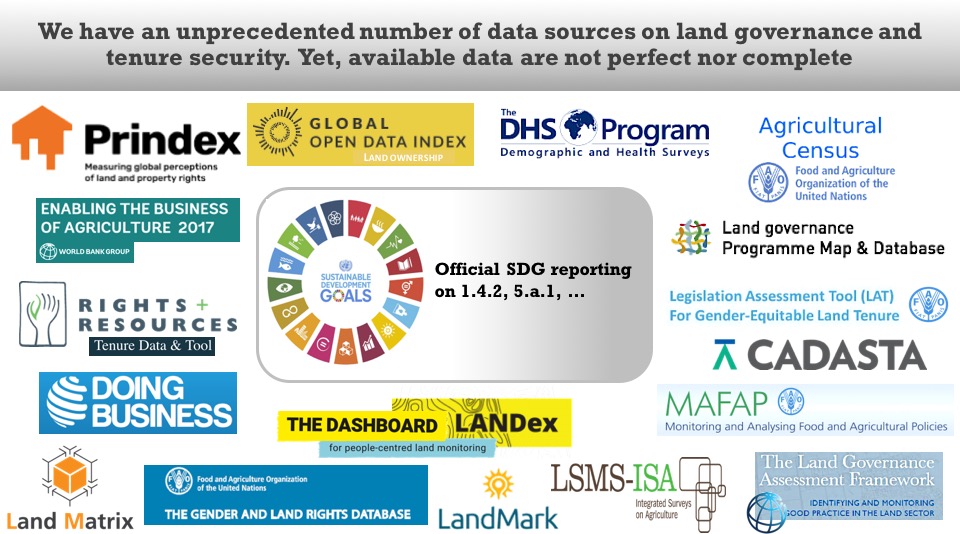 The SDGs rely on an extensive set of measurable goals and targets, and the land community eagerly awaits the first set of official data on land-related SDGs – particularly on 1.4.2 and 5.a.1. The Voluntary Guidelines, have been officially endorsed by 144 countries since 2012, but there is no harmonised or official system in place to monitor and measure their implementation. Despite this, we already have a rich set of data to assess the progress made – or the lack thereof – towards global land commitments.

A “quick and dirty” – but still very informative – overview of the main data sources and trends was presented at the Policy Session by the Global Donor Working Group on Land (GDWGL) held in March, during this year’s edition of the World Bank Conference on Land and Poverty. 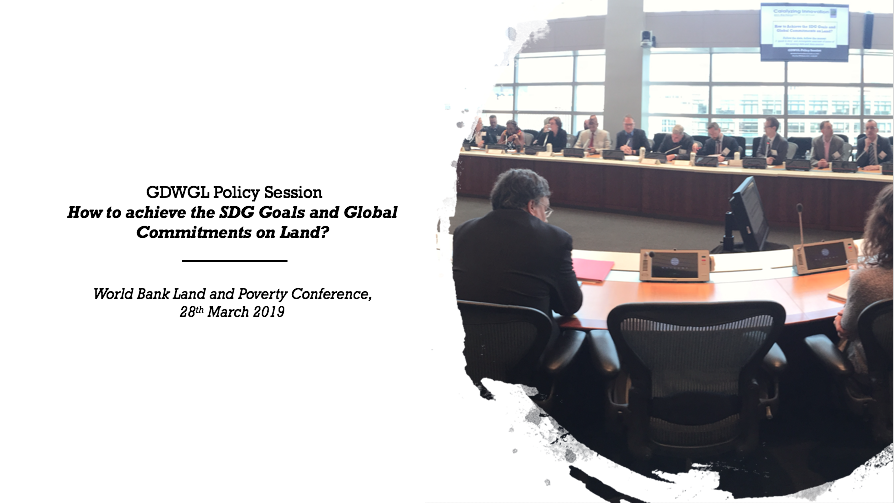 Recent data from Prindex – which was just adopted by the US as the official measure for SDG 1.4.2 – reveals that about 1 in 4 people in 33 countries around the world, feel insecure about their land and property. Western Africa is the area where the perceived levels of tenure insecurity are highest, with Burkina Faso and Liberia at the top of the list. If tenure insecurity emerges as a global problem, affecting – in different ways – countries at all latitudes and income levels, we are definitely learning something new about the geography of this issue. For instance, in the United Kingdom, perceived levels of tenure insecurity (11%) are higher than in Rwanda (8%), even if the drivers are very different. 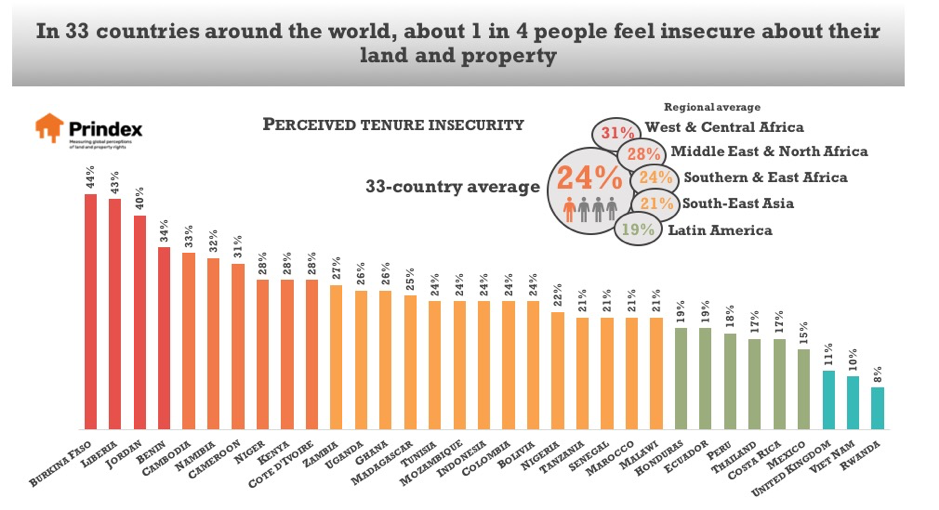 When it comes to land tenure, we now also know much more about the nature and magnitude of the gender gap. Data from the FAO Gender and Land Rights Database, as well as from a variety of other sources, suggests the existence of a often very large gender gap. The actual size of this gap can vary considerably across countries and depending on the specific definition of ownership that is taken into account. Once again, the geography of this gap is not exactly as it has originally been envisaged. In Malawi, for instance, 57.3% of agricultural landowners were women in 2013, while in Nigeria, in the same year, only 15.8% of agricultural landowners were women. 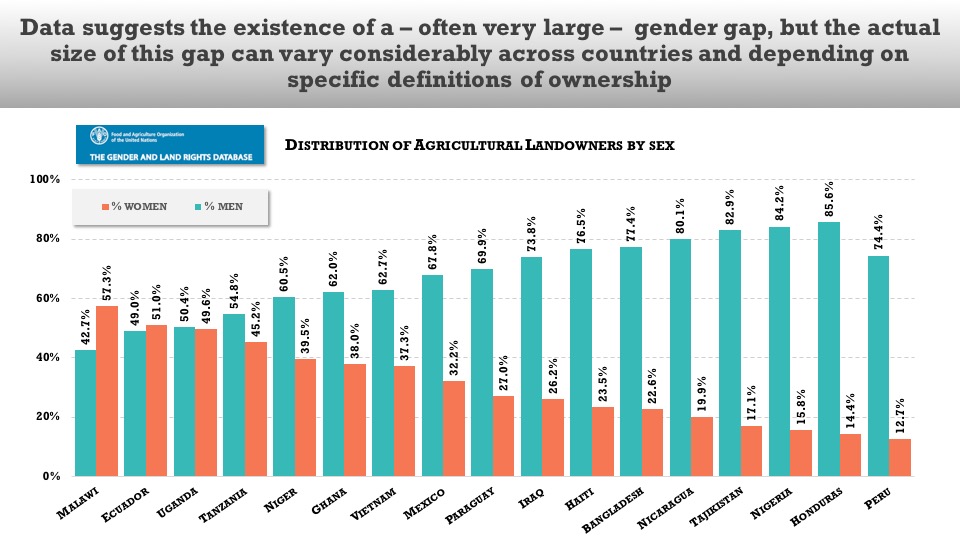 Data on forest tenure are also becoming increasingly available. For instance, RRI forest tenure data have recently been updated, revealing a positive trend in the recognition of community-based forest tenure systems, especially in low and middle income countries (LMICs).  An estimated 521 million hectares of forests were owned by or designated for Indigenous People and Local Communities in 2017, compared to 374 million hectares back in 2002. Despite this, officially recognised community-based forest tenure systems still remain only a fraction (15.3%) of global forest reserves. 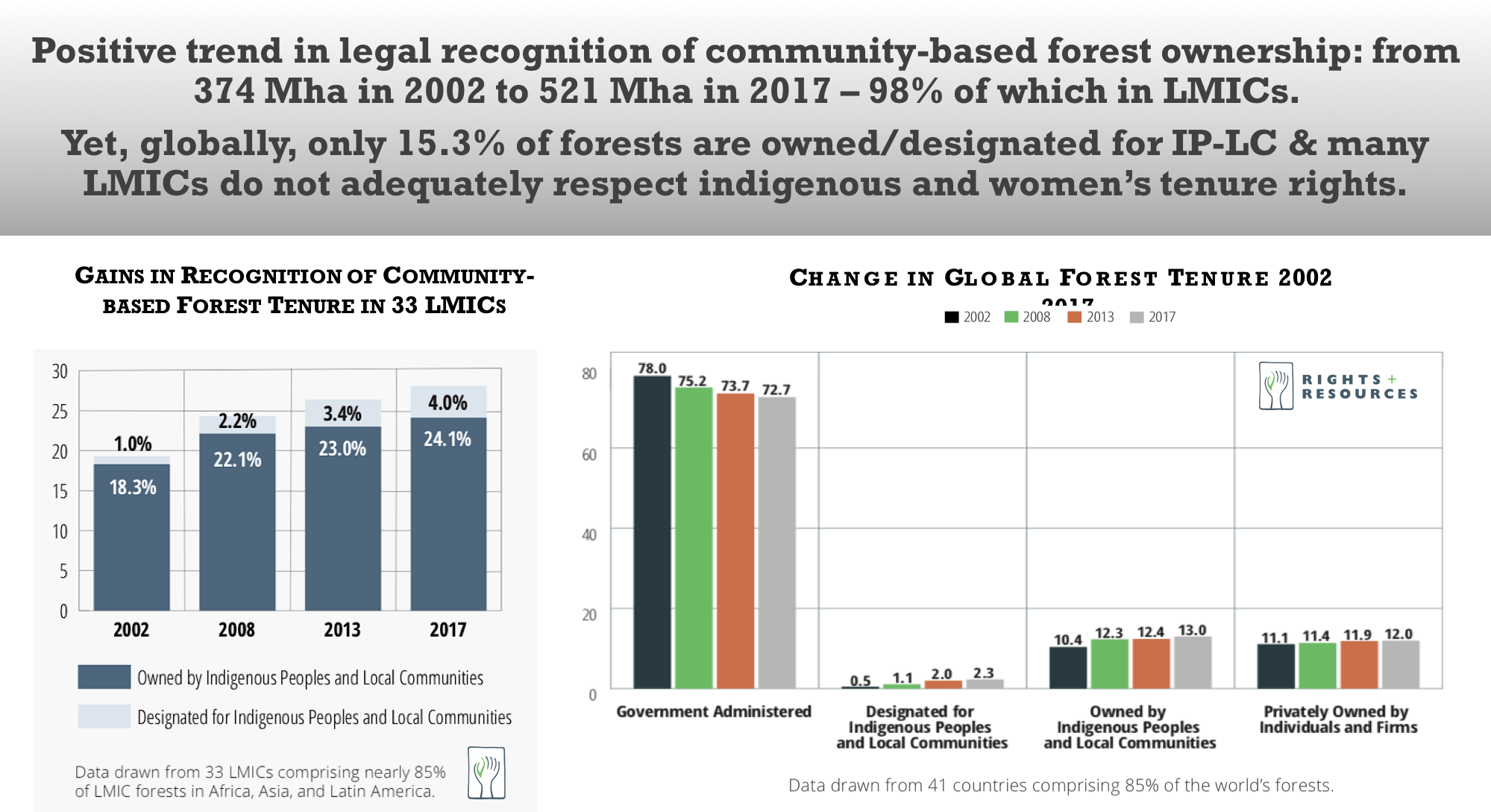 Source: RRI, At a Crossroads: Consequential Trends in Recognition of Community-based Forest Tenure.

Information on the distribution of economic efforts towards better land governance is increasingly being made public.  For instance, using data from the Land Governance Programme Map, curated by the GDWGL, it appears that the 21 different donors providing information for this dataset are targeting more than 100 countries around the world.  Despite this only five of these countries, namely Turkey, Indonesia, Morocco, Ethiopia and Vietnam, may get as much as 35% of the total 2.89 billion dollars allocated for the 222 currently active projects. 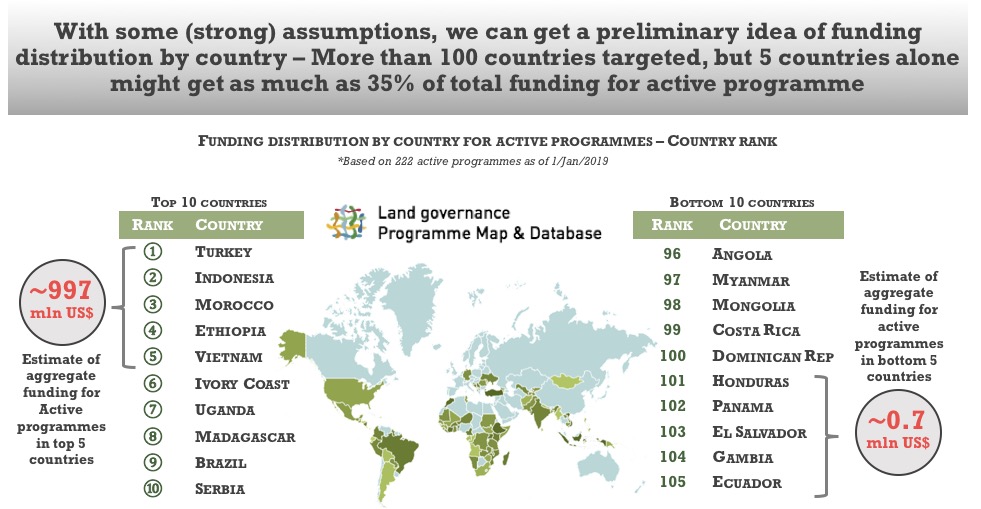 Staying grounded in the ‘age of data’: A few remarks for the land sector

The data age we are living in is not necessarily set to be the golden age of land governance. But if we stay grounded and we use the data we have efficiently and responsibly, it might just have a chance to be.

The key data question within the land governance sector is no longer simply methodological, such as: How do we measure tenure insecurity? While the methodological debate is still an important one, the crucial data question has now become increasingly empirical and strategic: How do we make the best possible use of the data we have on tenure insecurity?

The exceptional and unusual abundance of land-related data is not the target. It is just one of the tools on which we can rely to improve decision making and to track progress on global land commitments. It is not the numbers per se that matter, but the way we use them to select priorities, to identify the targets and measure progress – or the lack thereof.

“If we get to 2030 and all we have done is to improve the measurement of the SDG land indicators, we will ultimately have failed. Better measurement is vital and getting land indicators into the SDGs is a massive step forward, but it is hard to argue that measuring alone is sufficient. And so, I think it is high time that global actors working on land governance focus attention on how to make progress on the SDG land goals and the associated targets. 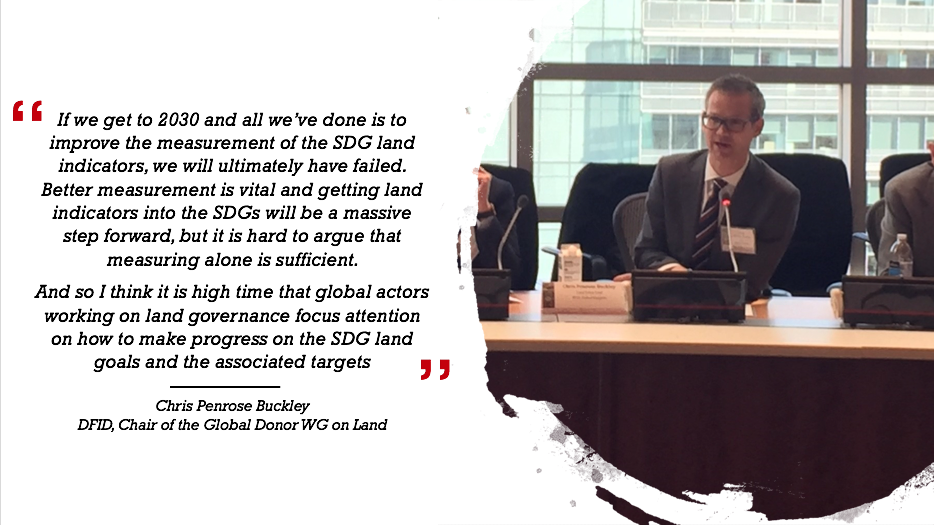 At a conference last year – continued Chris – I got talking to a gentleman who turned out to be the chair of the so-called Champions of 12.3, a unique coalition of executives from governments, businesses, international organizations, research institutions, and civil society dedicated to “inspiring ambition, mobilizing action, and accelerating progress” toward achieving SDG Target 12.3. It seems they had focused all their efforts on mobilising key leaders and stakeholders to make progress against the target without giving a great deal of thought to measurement and getting their indicators to ‘Tier 1’. Maybe they had some catch up to do on the monitoring front, but I think they had got their priorities right.

It is time – he concluded – we change gear and give more earnest attention to how to inspire ambition, mobilise action and accelerate progress to achieving SDG target 1.4, that is, by 2030 to ensure all men and women, in particular the poor and the vulnerable, have equal rights to ownership and control over land and other forms of property.”

Once again, it is not the statistics that matters, it is how we use these statistics to drive change and to improve the lives of real women and men, with so many still struggling for the recognition of their land rights.

SDG indicator 15.1.1 measures the relative extent of forest area in a given country. According to the metadata document, the availability of accurate data on a country's forest area is crucial for forest policy and planning within the context of sustainable development.