This article was originally published through CSDS (Center for Social Development Studies) at Chulalongkorn University, Thailand. It can be found at: https://www.csds-chula.org/publications/2020/4/28/critical-nature-are-chinas-dams-on-the-mekong-causing-downstream-drought-the-importance-of-scientific-debate

A recent report by Eyes on Earth (EoE)[i] highlighted the critical issue of China’s hydropower development and dam operation on the Lancang (upper Mekong) River and connected it to the ongoing drought in the lower Mekong basin. The report sparked numerous articles in regional and international news outlets[ii],[iii],[iv],[v], think tanks[vi], and online public discussion[vii]. Independent research groups and the Mekong River Commission (MRC) have questioned the EoE report’s methodology and its conclusions[viii],[ix], and called for increased cooperation between MRC member states and China.

Here, we outline some key scientific issues regarding the report and the assertions drawn from it, adding our own independent analysis of the EoE study, and suggest a constructive path forward based on the importance of data-sharing, rigorous peer review, and evidence-based democratized decision-making.

Evaluating the EoE report and considering its claims

The EoE report presents a statistical model to predict water level at the Chiang Saen monitoring station in Northern Thailand using a remotely sensed wetness index. It concludes that the 2019 lower Mekong drought was largely due to water being stored behind dams on the Lancang River in China, rather than an absolute shortage of water. Additional commentary on the report has gone further, and statements were made that China “entirely prevented the annual monsoon-driven rise in river level”.[vi]

The EoE report and subsequent commentary reveal key issues about the role of scientific research in sensitive and at times heated public discussions, such as the hydrological impacts of upstream dams on the lower Mekong River. That a public discussion is taking place on this crucial issue is positive, as there few forums to meaningfully discuss the impacts and ways forward, particularly for communities affected directly. But caution is also required on how science is drawn upon as a form of knowledge within such debates.

The commentary from the Stimson Center based on the EoE report does highlight a key issue that should be of public concern in downstream countries: the generation capacity of China’s upstream Mekong dams currently far exceeds China’s electricity demand[x], indicating there was likely potential for the release of water downstream to where it was needed during the drought, without undermining China’s domestic electricity security.  Yet, there are also several shortcomings in the EoE report itself and therefore the subsequent interpretation of it also hold policy implications.

A key limitation of the EoE report is that the authors’ analysis was based on water level, rather than water volume, giving only a partial picture of the situation on the Lancang River. This led to exaggerated claims that went beyond what could be justifiably concluded by the study – that the dam cascade withheld an entire monsoon season’s worth of rainfall. This was predominantly due to incomplete data access; the authors of the report had only obtained water level data from the MRC[viii],[ix], which limited the analysis to a simplified methodology based on this data and satellite imagery. The persistent data scarcity in the region significantly reduces the comprehensiveness of hydrological studies.

Such issues highlight the importance of acknowledging the study’s limitations, which is common practice in published scientific studies and helps avoid black-and-white conclusions, as seen in this case[ii],[vi]. The study’s methodological sturdiness also comes under question given the apparent lack of a rigorous peer-review process.  It is widely recognised that modelling reservoir operations is a difficult task in the absence of detailed data. During a recent panel discussion [vii] online with one of the report’s authors, peer-review of the method[xi] was mentioned, but it is difficult to substantiate such claims without a transparent scientific peer-review process (i.e. through publication in a scientific journal, or corroboration by multiple research groups) of the methodology for this particular purpose[xii].

A case for plural science

Curious about the conclusions reached in the EoE report and recognizing the high stakes within the subsequent public discussion, we wanted to critically scrutinize the report’s validity as would be conducted in an independent peer review process. Here, we briefly present our independent check to test the conclusion on Chinese dam operation – a discussion which is lacking in the report and related documents – and to demonstrate the usefulness of a wide range of model structures and input data.

The EoE report provides results in terms of water level, but this cannot be turned into water volume without a rating curve[xiii] at Chiang Saen. We therefore estimated runoff produced upstream of the Jinghong Dam – the last in the Lancang cascade – using a total of 26 freely and openly available runoff datasets[xiv]. Drawing on recent studies[xv], we estimated the Lancang cascade’s active storage capacity to be 25.6-27.1 km3.

Importantly, only two of the 26 datasets predict (on average) smaller runoff volume produced during the wet season than the Lancang cascade active storage capacity (Figure 1A).  The ensemble mean[xvi] of our estimates is 43.8 (+3.7/-3.6) km3, suggesting that the cascade can store 54-68% of the runoff produced in an average year. Figure 1B shows the cumulative sum of runoff produced in an average wet season. We can infer from this figure – assuming that all the active storage capacity was available at the start of the wet season and all incoming water was stored – that the cascade would be entirely filled sometime in July or August. 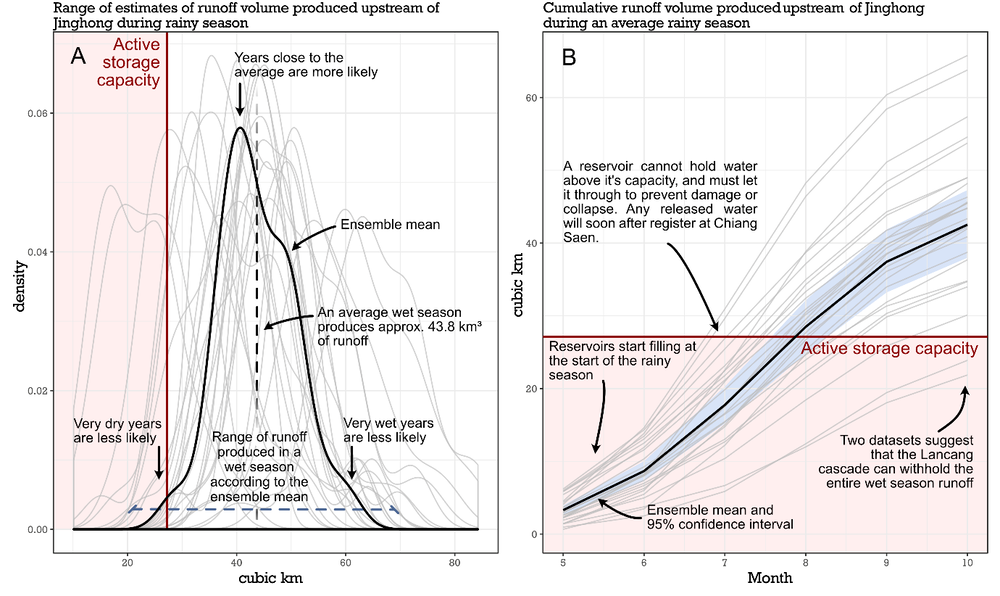 By changing the research question and designing a methodology to address this question under data scarcity, we arrive at an opposite conclusion from the discussed reports – it seems likely that the upper Mekong Basin experienced drought-like conditions. If we accept the presented evidence showing the reservoirs at a high water level at the start of the 2019 wet season[ii],[vii], the Lancang cascade in China would have been overwhelmed by the inflowing water of an average wet season and would not have been able to prevent the flood pulse at Chiang Saen.

It should be noted that our approach, like the discussed EoE report, arises from incomplete data availability, and as a simple bucket model does not consider dam operations, transmission losses or water withdrawals. To further the debate, we make our code available for public review in GitHub[xviii]. However, an ensemble approach, like the one presented here, can facilitate discussion about modelling beyond questions looking for simple conclusions, and acknowledging multiple ways to overcome challenges[xix] inherent in hydrological modelling.

What can we do to address these shortfalls?

The issues we have highlighted here demonstrate the need for a constructive path forward, for which we propose four suggestions. First, open data-sharing is critical for comprehensive hydrological modelling of the Mekong. Without this, it is impossible to gain a true understanding of what is occurring across the basin, and opens the process up for unconstructive politicization and the closing of potential channels of dialogue[xx]. Unfortunately, China’s persistent lack of data-sharing with downstream countries, despite many assurances and invitations to share data[xxi], means that at the present time only such incomplete assessments of the impact of the upper dam cascade are possible. Thus, regardless of the shortcomings of research findings, China’s lack of transparency has brought about assumptions of dishonesty regarding its lack of release of water to downstream Mekong countries during the 2019 drought. In terms of data sharing, the ball is firmly in China’s court to act upon it.

Second, we emphasise the need for objective, credible science, particularly in such complex settings where there is a diverse range of perspectives, knowledge and agendas. From a hydrological modelling perspective, this can be achieved using a range of different model structures and assumptions which account for a wide range of plausible outcomes. This arises from acknowledging that there is no such thing as a ‘perfect’ model, and therefore uncertainty needs to be clearly communicated. Credibility of modelling can only be verified through a rigorous peer-review process and with the use of comprehensive model evaluation frameworks. Such frameworks acknowledge modelling as a social process[xxii], not merely a technical one.

Following from this is the need for a plurality of perspectives both within the scientific community across disciplines, and across society, as water resource sharing in the Mekong is debated. For example, increased inclusion of Chinese researchers would be highly beneficial, not just from a knowledge-perspective in ensuring rigorous debate, but also a diplomatic one to ensure that there is broad agreement – and constructive contestation - on how the analysis unfolds. Furthermore, when the intrinsically plural nature of knowledge is recognised, scientific advice can become more robust and democratically accountable[xxiii]. For this, we must also ensure research is inclusive of both physical and social sciences, and community knowledge.

Finally, research should be used as a catalyst for science-based policy discussions in the public domain, rather than the means toward a definitive answer that shuts down conversation. Despite their shortfalls, the EoE and Stimson reports have certainly achieved this. We, however, caution the oversimplification of findings in facilitating such discussion, to not undermine the credibility of science within public discourse.

Overall, we hope to see dialogue that is not one-way from ‘experts’ to the public, but rather an iterative process that encourages democratic debate. This requires a certain level of humility, both on the part of scientists and policymakers.

The report from EoE and associated public discussion have connected China’s cascade of dams to the ongoing drought in the Mekong Region, and highlighted the role - and responsibilities - of scientists in untangling the complex web of environmental issues along the Mekong River.

As our analysis and commentary of others[viii],[ix] have demonstrated, there are weaknesses in the methodology used that undermine the claims that China completely held back the 2019 wet season flow. Our analysis suggests that it is improbable that China’s dam cascade can store an entire wet season’s worth of rainfall, and subsequently be the primary cause of the 2019 drought. But we agree that China could have alleviated the drought conditions by releasing more water from the reservoirs, even as it would be at China’s cost of sacrificing part of its underutilized electricity generation potential.

We therefore suggest a constructive path forward: (1) increase public availability of data which, (2) informs a wide range of rigorously-debated scientific studies across disciplines – an example of which we have provided here. (3) The subsequent scientific debates should be accountable to and informed by the needs of multiple groups across society, including communities and states. (4) Encourage and support evidence-based and democratized decision-making. Only through this can we hope to achieve cooperative and equitable sharing of water resources along the Mekong River.

We would like to thank Rajesh Daniel and Carl Middleton for their helpful comments and editorial review of this article.

[i] Basist, A., and C. Williams. 2020. ‘Monitoring the Quantity of Water Flowing Through the Upper Mekong Basin Under Natural (Unimpeded) Conditions’. Sustainable Infrastructure Partnership, Bangkok.

[vi] Eyler, B. and Weatherby, C. 2020. ‘New Evidence: How China Turned off the Tap on the Mekong River’. The Stimson Center. https://www.stimson.org/2020/new-evidence-how-china-turned-off-the-mekong-tap/.

[xiii] A rating curve is a mathematical model (equation) which describes the relationship between water level and discharge.

[xv] Total storage capacity 46.4 km3 was obtained from the WLE Greater Mekong Dam Observatory. We estimated the active storage by computing the ratio of total-to-active storage ratio from available values in Table 1 in Räsänen et al. (2017), and multiplying the total storage with the ratio 0.584 for higher, and 0.551 for lower estimate. Active storage capacity refers to the volume which is available for dam operators to work with. Dam data from Mekong Region Futures Institute. 2020. ‘Dataset on the Dams of the Greater Mekong’. Mekong Region Futures Institute, Bangkok. Active storage ratio from Räsänen, Timo A., Paradis Someth, Hannu Lauri, Jorma Koponen, Juha Sarkkula, and Matti Kummu. 2017. ‘Observed River Discharge Changes Due to Hydropower Operations in the Upper Mekong Basin’. Journal of Hydrology 545 (February): 28–41. https://doi.org/10.1016/j.jhydrol.2016.12.023.

[xvi] An ensemble mean is the average of a collection of many estimates. Here it refers to the average value of  combining all of the 26 individual estimates.