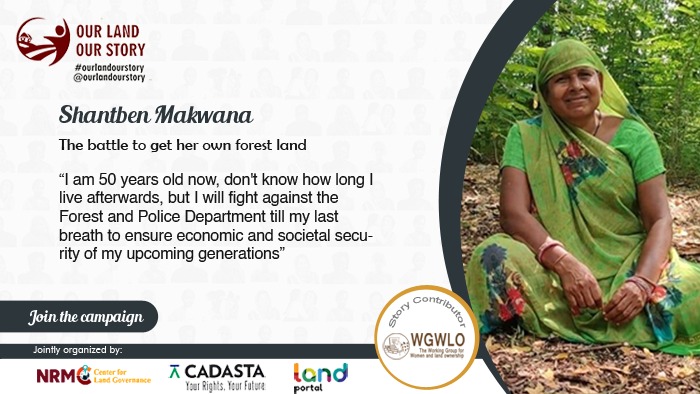 In 2007, Shantben Makwana from Charada village of Santrampur block in Mahisagar District, did a Claim Application for Forest Land under The Forest Rights Act-2006 on the land, which her family has been cultivating for generations.

Being a Forest Rights Committee Member at the village level, Shantaben knew about the process of individual forest rights claims, the list of documents required, and other procedural requirements. So, she regularly followed up at Province and Block level offices regarding the status of her land application. After her continuous efforts and visits to different forest department offices, she got to know that her claim was rejected in 2009.

Meanwhile, she asked other villagers and Forest Rights Committee members for further support to understand the steps and under their guidance, she re-appealed to the Collector’s Office with all the additional required documents in the same year. But, the struggle to get back her forest land for cultivation continued. Shantaben and her family were subjected to physical and mental torture and violence by forest department officials and police staff.

A panch case was filed by Shantaben in 2013 with some changes in the land area she claimed. Despite the consent of the panch, she was constantly harassed by the forest department officials and police personnel. Four members of the family were also kept in jail for 6-7 days.

Her Family used to harvest during the Rabi season to meet the basic food requirements of the entire family. But as soon as she harvested some crop, the forest department would come and dig a pit, cut the crop, plant big trees like mango (Amba) or sow Acacia seed, make an iron road trench on the claimed land, thus causing hindrance in the process of harvesting.

In 2018, Shantaben came to know about one of the SwaBhoomi Kendra- an institutional mechanism of WGWLO (Working Group for Women and Land Ownership) – an organization working on women’s land ownership. There she came in contact with a paralegal worker – A community-level cadre working on Women’s Forest Rights and explained her case in detail. Paralegal workers understood the existing situation and helped in preparing the blueprint for legal proceedings for Shantaben’s case. A handwritten application was given to her and this application consisting of permission to cultivate forest land was submitted at the taluka level, province office, district-level Mamlatdar office, and police department. Due to these efforts, she got written permission from the forest department to cultivate the claimed land. Furthermore, in case of harassment by local authorities, especially the forest department officers or police officers, she could legally take action against them.

Shantaben and her family’s economic situation had deteriorated due to expenses incurred due to frequent visits to the forest department office in addition to limitations of cultivation on the claimed land for the past 5-7 years. This situation changed due to aid from WGWLO support which included financial support for commuting and reducing legal documentation cost and other support in terms of moral and social support. The network’s experience and expertise in forest and land laws and good relations with forest department officials helped Shantaben in getting written permission to cultivate her land till further process in a very short period. With the help of WGWLO Shantaben and her family are living a secure life and harvesting enough to meet the basic food requirements of the family.
“I am 50 years old now, don’t know how long I live afterward, but I will fight against the Forest and Police Department till my last breath to ensure economic and societal security of my upcoming generations”, says Shantaben in a firm voice.

Story originally published on Our Land Our Story page.