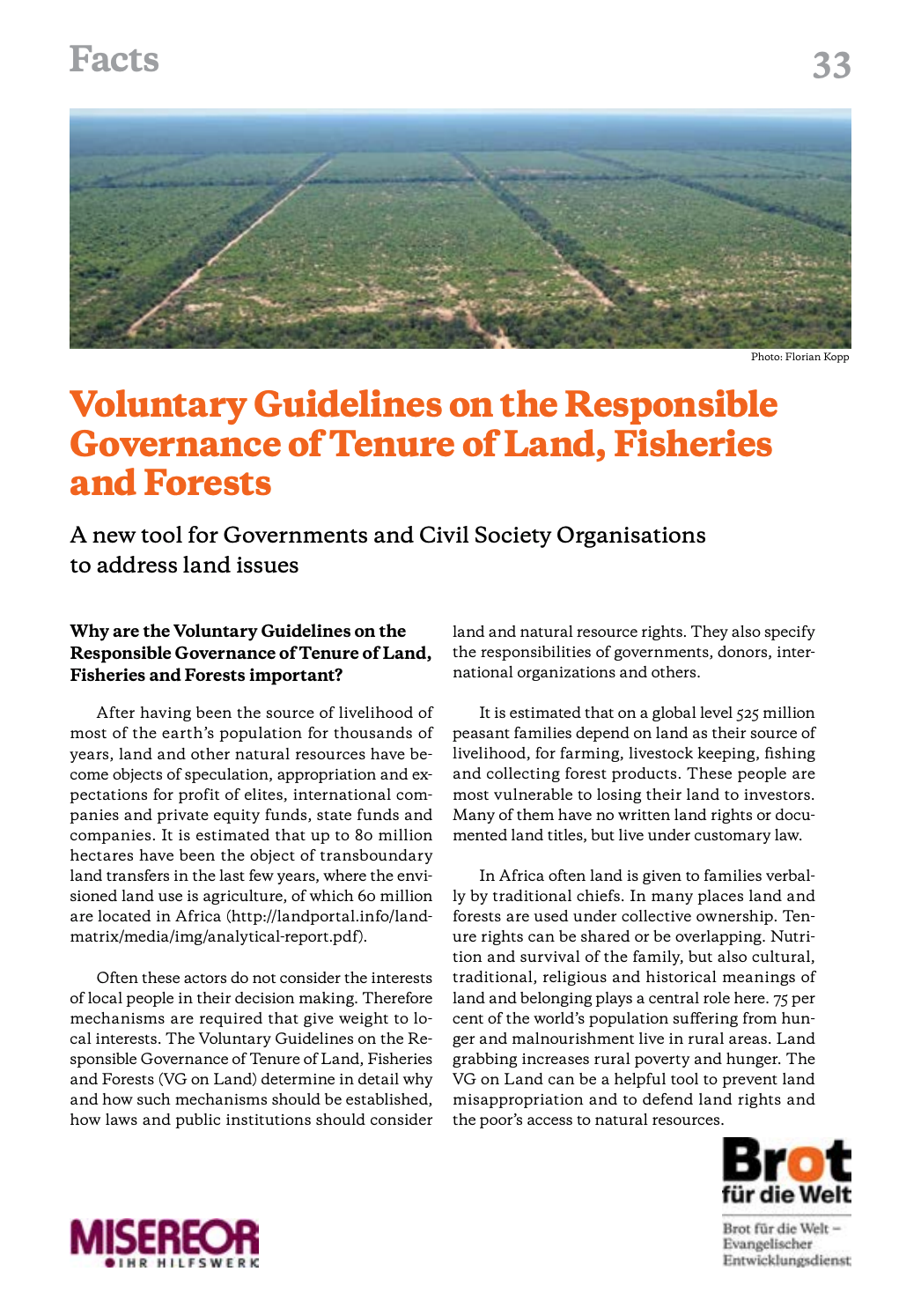 Why are the Voluntary Guidelines on the Responsible Governance of Tenure of Land, Fisheries and Forests important?

After having been the source of livelihood of most of the earth’s population for thousands of years, land and other natural resources have become objects of speculation, appropriation and expectations for profit of elites, international companies and private equity funds, state funds and companies. It is estimated that up to 80 million hectares have been the object of transboundary land transfers in the last few years, where the envisioned land use is agriculture, of which 60 million are located in Africa (http://landportal.info/landmatrix/media/img/analytical-report.pdf).

Often these actors do not consider the interests of local people in their decision making. Therefore mechanisms are required that give weight to local interests. The Voluntary Guidelines on the Responsible Governance of Tenure of Land, Fisheries and Forests (VG on Land) determine in detail why and how such mechanisms should be established, how laws and public institutions should consider land and natural resource rights. They also specify the responsibilities of governments, donors, international organizations and others. It is estimated that on a global level 525 million peasant families depend on land as their source of livelihood, for farming, livestock keeping, fishing and collecting forest products. These people are most vulnerable to losing their land to investors. Many of them have no written land rights or documented land titles, but live under customary law.

In Africa often land is given to families verbally by traditional chiefs. In many places land and forests are used under collective ownership. Tenure rights can be shared or be overlapping. Nutrition and survival of the family, but also cultural, traditional, religious and historical meanings of land and belonging plays a central role here. 75 per cent of the world’s population suffering from hunger and malnourishment live in rural areas. Land grabbing increases rural poverty and hunger. The VG on Land can be a helpful tool to prevent land misappropriation and to defend land rights and the poor’s access to natural resources.

Bread for the World – Protestant Development Service is the globally active development and relief agency of the Protestant Churches in Germany. In more than 90 countries all across the globe we empower the poor and marginalised to improve their living conditions. Key issues of our work are food security, the promotion of health and education, the access to water, the strengthening of democracy, respecting human rights, keeping peace and the integrity of creation.

MISEREOR is the German Catholic Bishops’ Organisation for Development Cooperation. For over 50 years MISEREOR has been committed to fighting poverty in Africa, Asia and Latin America. MISEREOR’s support is available to any human being in need – regardless of their religion, ethnicity or gender.