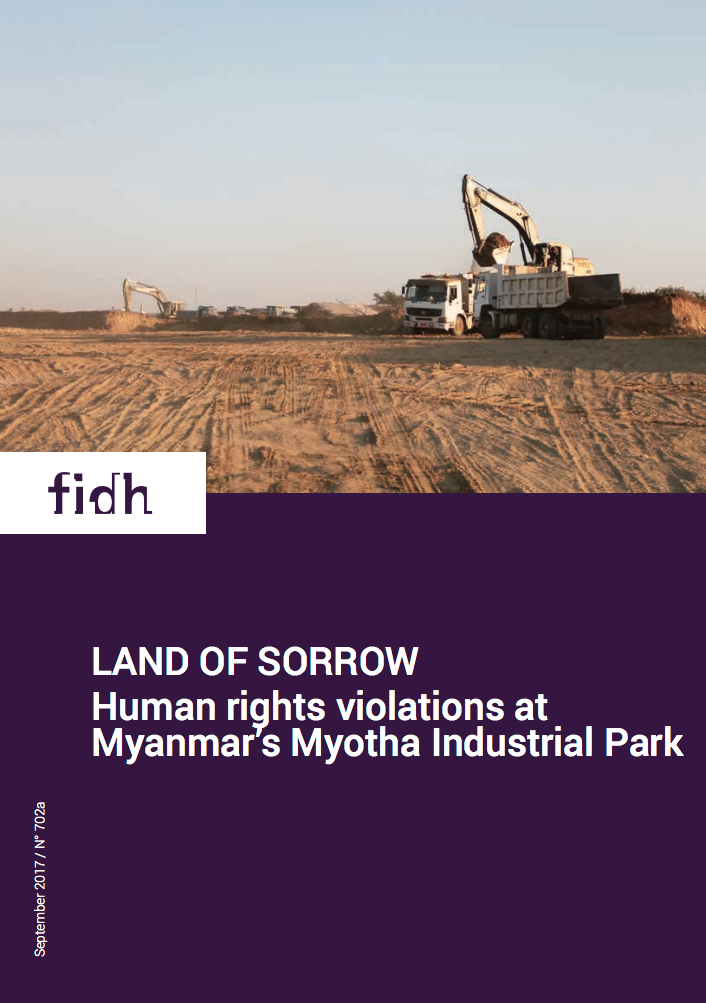 (Paris, Yangon) Myanmar may soon face a land conflict epidemic as a result of the growing influx of investments and the consequent demand for land, unless laws and policies that adequately address land rights issues are urgently adopted and implemented, FIDH warned in a new report published today.

In the Myotha Industrial Park development area, the combination of a flawed legal framework, unscrupulous authorities, and irresponsible investors produced a perfect storm in which more than 1,000 families from 14 villages lost their land – their sole source of livelihood – to make way for the project’s development.

The process of land acquisition from residents was not inclusive, contravened national laws, and failed to meet international standards related to good practices of consultation with affected communities. The process by which compensation was offered to farmers was riddled with corruption, confusion, arbitrary compensation amounts, and intimidation.

Many of the farmers reported that authorities significantly under-calculated their land area, with calculations that, in many cases, accounted for only between 10% and 25% of the total amount of land farmers said they used. Many farmers who reluctantly accepted compensation for some or all of their land only did so after authorities and the project developer warned them that they would still lose their land and receive nothing in return if they refused. Farmers who refused to accept the compensation offered for their land reported that both the authorities and the project developer intimidated and threatened them with arrest and imprisonment.

Land confiscation and clearing to make way for the project, coupled with the inability of farmers to purchase replacement land of comparable size in the area, deprived farmers of their farmland and access to food, livelihood, and adequate housing. The loss of their land has had a negative impact on the enjoyment of the right to work for local farmers, many of whom ended up working as hired day laborers, often performing menial tasks such as construction, portering, or collecting firewood. Many affected villagers left the area after losing their land and, in some cases, moved to Mandalay to seek employment in factories there.

FIDH is an international human rights NGO federating 178 organizations from 120 countries. Since 1922, FIDH has been defending all civil, political, economic, social and cultural rights as set out in the Universal Declaration of Human Rights.

FIDH is an international human rights NGO federating 178 organizations from 120 countries. Since 1922, FIDH has been defending all civil, political, economic, social and cultural rights as set out in the Universal Declaration of Human Rights.

Project Description
Land governance is at the center of development challenges in Cambodia, Laos, Myanmar and Vietnam. Governments are revising land policies and practices in order to face these challenges. The project aims to (i) assist the emergence of more favorable policies and practices for securing the rights and access of family farmers to land and natural resources; and (ii) to strengthen the effectiveness of concerned stakeholders through learning, alliance building and regional cooperation.