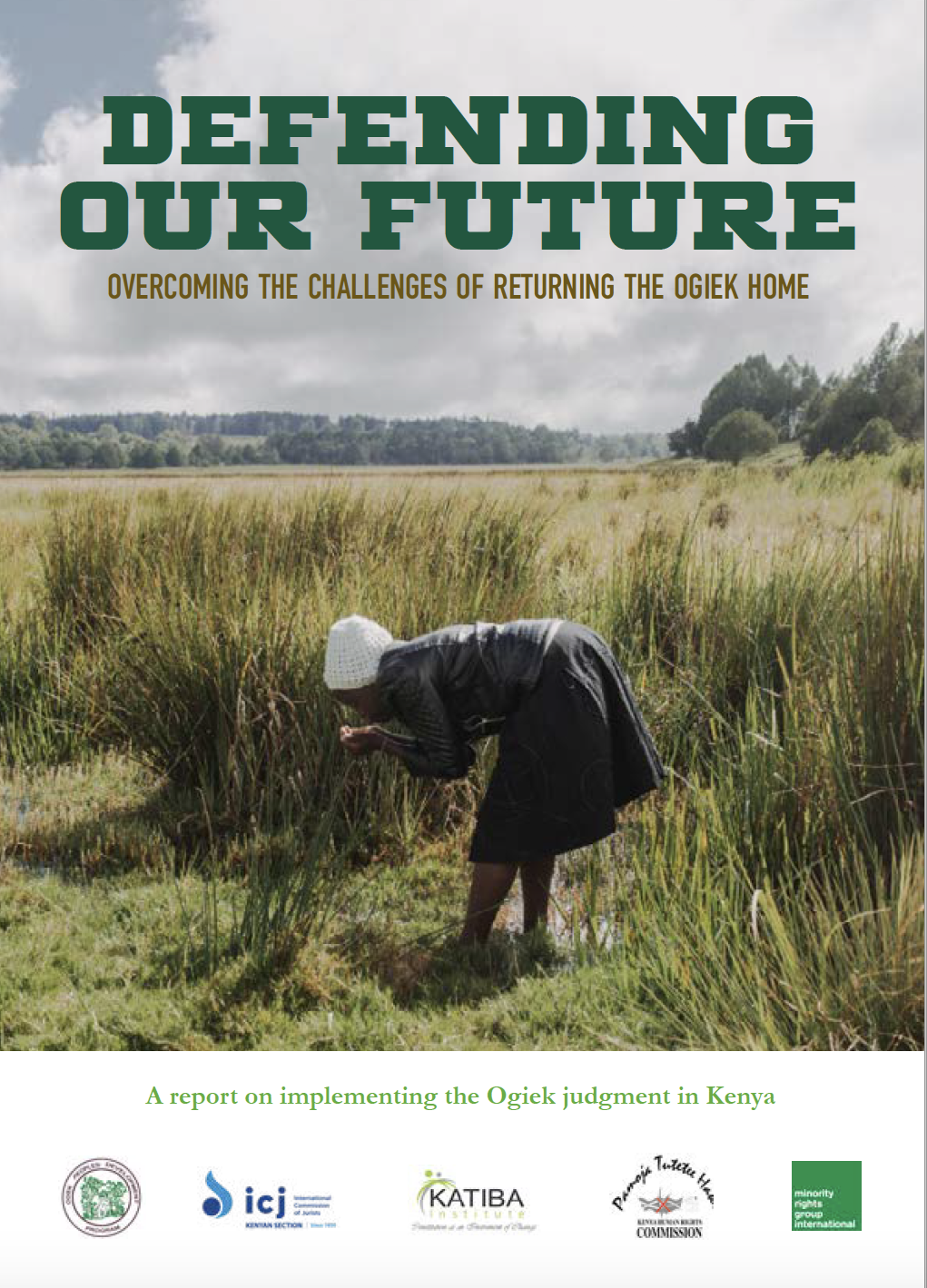 The implementation of the Ogiek judgment is in the hearts and the spirits of the Ogiek people and the indigenous peoples globally. On 26 May 2017, we received the judgment at the African Court on Human and Peoples Rights (ACtHPR) in Arusha Tanzania, after a 12-year process that started in Kenyan courts and involved the African Commission on Human and Peoples Rights (ACHPR), The Gambia, besides the Court.

Our community consists of 52,000 members (2019 National Census) of which about 45,000 are from Mau and have the Mau Forest as their ancestral land. The Mau Forest Complex is approximately 400,000 Hectares and is administered under 22 blocks including the Maasai Mau.

Our community was in the corridors of justice for one reason: to regain full control of our ancestral land, for our sake, for the sake of the people of Kenya and to protect our biodiversity. The Ogiek means ‘caretakers of fauna and flora’, and as traditional conservationists, we suffer seeing the environmental destruction of our home. We do not view Mau Forest land as a factor of commercial production but as central to the cultural wellbeing, religious sites, traditions and customs of our community. The Ogiek are the owners of Mau, which has been our ancestral home from time immemorial.

The richness of our forest is measured in terms of its honey, shelter, and medicinal herbs, despite repeated attempts and eviction of our community depriving us of our livelihood and full participation as citizens of Kenya. While Kenyan history confirms the Ogiek as the first inhabitants of Kenya from 1000 AD, today we are forced to seek support and official recognition of our custodianship of the Mau, despite our uncontested and legally confirmed ancestral links.

The evictions and attempts to transfer Ogiek from our ancestral land forced us to seek justice in Kenyan courts after other methods proved futile. As the saying goes, ‘removing Ogiek from Mau Forest is like removing a fish from water – it will definitely die’. Political interference, which resulted in non-Ogiek being settled in the Mau Forest, didn’t sit well with our community. Many bodies attempted to resolve the Ogiek land rights issue, such as the Njonjo Commission and the Ndungu Commission, followed by the Mau taskforce formed by the then Prime Minister of Kenya during the Coalition Government in Kenya (2009). This last commission, while acknowledging many non-Ogiek had been wrongfully granted our lands, also resulted in a 14-day notice of our eviction in the name of environmental conservation. Besides reinforcing the environmental disaster befalling our forest, that decision failed to gain our Free, Prior and Informed Consent (FPIC). The subsequent and continued destruction of the Mau Forest has taken place under the watch of the government’s Kenya Forest Service (KFS), including the depletion of the forest canopy, which was intact during our tenure.

The most recent taskforce gazetted by the Cabinet Minister for Environment and Forestry was formed to advise government on how to implement the Ogiek judgment. This taskforce, like colonial rule in Kenya in times past, did not include representation of our community even though the deliberations directly concerned us. We understand its mandate ended on 24 January 2020 but its report has not been made public despite our attempts to seek disclosure. The Ogiek community made submissions to the taskforce seeking complete restitution of our ancestral land, with at least seven non-transferable community titles.

We desperately wish for our land issue to be resolved so we can, like other Kenyans, live in dignity and with certainty about our future, and set about rehabilitating our ancestral forestland.

Ogiek Peoples’ Development Program (OPDP) is a Kenyan based Non-Governmental Organization (NGO) founded in 1999 and registered by the Kenyan Government in 2001. It was formed by the typical Ogiek elders, opinion leaders, and professionals after long historical injustices that deprived Ogiek community of their rights as Kenyan citizens.