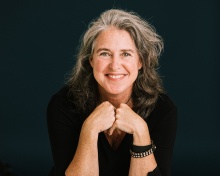 Gillian Caldwell is the CEO of Global Witness which investigates, exposes and advocates to end corruption and environmental and human rights abuses associated with natural resource extraction. She is an attorney and filmmaker, and formerly served as Campaign Director for 1Sky (now merged with 350.org), a collaborative campaign that pushed for US action to tackle global warming. For a decade she was the Executive Director of WITNESS, which was co founded by musician Peter Gabriel and advances the use of video to highlight human rights abuses. Prior to that she led an international undercover investigation into trafficking women into forced prostitution. She is co-editor and author of Video for Change, received her BA from Harvard University and a J.D. from Georgetown University. She is a recipient of numerous awards and honors including Ashoka, Skoll and Schwab awards for social entrepreneurship.

Mostrando 1 - 1 de 1
Blog post
Global
Tierra y Corrupción
Incidencia
Agricultura
Derechos sobre tierras comunales
Adquisición obligatoria
Corrupción
Expropiación
Industrias extractivas
adquisiciones de tierras
acaparamiento de tierras
acaparamiento de tierras
Derechos de tierras
Activistas por el derecho a la tierra
minería
We are facing challenges in our collective efforts to ensure that land rights are respected around the world. We are fighting the odds with ever more powerful companies and governments surrounding us. And these forces are all too often working in collusion to drive business forward with a profit at any price mentality  -- and at the expense of human rights and the environment.