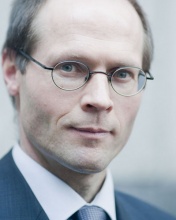 Olivier De Schutter is a Belgian legal scholar specialising in economic and social rights. He served as the United Nations Special Rapporteur on the right to food from 2008 to 2014. He is a Professor of international human rights law, European Union law and legal theory at the Université catholique de Louvain in Belgium, as well as at the College of Europe and at SciencesPo in Paris. He was a regular visiting professor at Columbia University between 2008 and 2012 and has regularly contributed to the American University Washington College of Law's Academy on Human Rights and Humanitarian Law. He is the first chair of the Belgian Advisory Council on Policy Coherence for Development and he co-chairs the International Panel of Experts on Sustainable Food Systems (IPES-Food), a group of experts from various disciplines and regions who work together towards developing proposals for food systems reform.

The creation of Universities as an institution was one of the best things to come out of the Middle Ages. The institution's commitment to extending the boundaries of human knowledge, transmitting this knowledge, and thereby increasing the humanity of the human race has kept it at the forefront of civilization in the 21st century. The Université catholique de Louvain has played a part in this process with pride since 1425.

This week in Geneva, the Human Rights Council is expected to take a position on the follow-up to a draft Declaration on the Rights of Peasants and Other Persons Working in Rural Areas. Five years after the start of the negotiations, we are at a turning point.