To Take the Road Less Taken: Land Rights Open Up a Plethora of Empowering Opportunities for Lataben 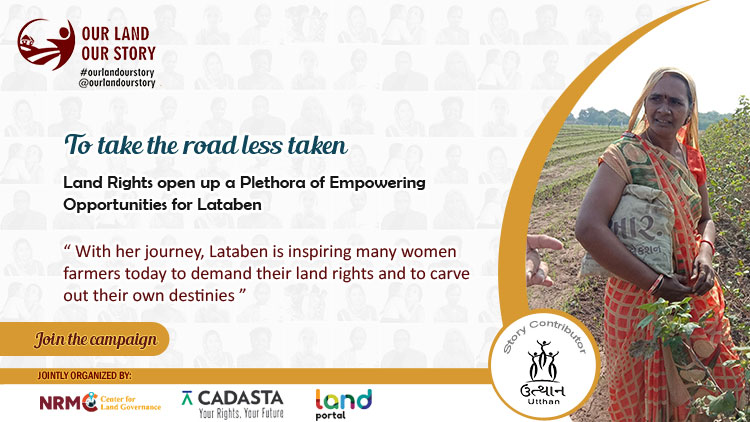 Lataben, a feisty 36-year-old belongs to the Konjdi village of Mahuva block in Bhavnagar district in Gujarat. Belonging to the Kumbhar community, which officially comes under the “other backward caste category” in the region, she has been single-handedly raising her young kids ever since she lost her husband in 2014. Her grit and determination, as well as her self-reliance, can be understood the best by going back to her struggle for her land. It is quite common for women to face exclusion from ancestral property or family landholdings (varsai) even though they are relentlessly engaged in family agricultural labour, often receiving nothing in case of their husband’s death. Only 13.96% of women own land in India and in Gujarat, and only 16.4% have operational landholdings.

Lataben had been associated with the women’s group of Mahila Vikas Sangathan and Utthan supported activities in the village. After her husband passed away, even though Lataben continued to work upon the family land, she understood that to be able to break free from exploitation and servitude, she would need to gain access and control to her rightful share in the family land. Land had always been a source of livelihood, as well as a symbol of self-sufficiency to her. But she was met with immense resistance from her late husband’s family, who wanted to give her no part in the varsai (inheritance). The support from the Sangathan motivated her to demand her land rights. The Utthan team provided her with timely guidance and information wherever required and she braved the process very much on her own. “I laid down on my land to prevent my brother-in-law from taking over the land” she recounts. The years from 2014 to 2019 were arduous, and it was only in 2019 that she was able to get her rightful share of land in the family land-holding. As a result, she has been practicing rain fed agriculture on 1.6 acres, her husband’s share. After Lataben got her rightful share in the land, she supported seven other women to gain their land rights as well. Five of these were widows, while two of them were married women who are now joint owners of land. Facilitated by Utthan, Lataben and other women farmers formed a farmer group, and got registered with ATMA (Agriculture Technology Management Agency).

Over time Lataben gained leadership skills and joined local efforts of capacitating women farmers. She was soon taking training to become a Master farmer. She was selected for demonstrating a sustainable package of practices in cotton in the Kharif season in 2019 by the Village Development Committee due to her socio-economic condition, leadership qualities, and interest in supporting others. Lataben allotted 1.2 acres for the cotton demonstration. Utthan supported her with bio-inputs and supported her in following a rigorous package of sustainable practices –– starting from soil and water testing up to harvest. In the remaining land, she continued to grow Bajri (pearl millet) and groundnut to ensure food security. The results were commendable. “Due to systematic practices, I produced 77 maund (nearly 2850 kgs) of cotton (in 1.2 acres) compared to adjacent farms, which had an output of 40 maund in 1.6 acres, even after using chemical fertilizer. Their crop was short and very dry. Out of my earnings of Rs. 50,000 (nearly 650 USD). I paid off a debt and bought an insurance policy for my children”. 10 other women farmers from the village observed her practices. Her leadership and persuasiveness honed through team engagement, gender, and leadership training inputs and improvement in technical knowledge made it possible for her to share her learnings and train another 50 women farmers till date.

Prior to her engagement with sustainable farming practices, she used to work as an agricultural labourer in the nearby villages in a 20-kilometer radius, during both Kharif and Rabi seasons, to meet her family’s livelihood needs. “In the Kharif season, last year and this time I did not need to engage in agriculture labour work since my production was good. But due to lack of irrigation, I will have to go for agricultural labour in the coming Rabi season so that we can make ends meet”. The fact that she could do without labouring, even if it was for one season, greatly relieved her. She replicated the learnings in Kharif 2020 at her own cost. Her association with Farmer’s Group helped her access seed support in this season, which was of great help in the COVID crisis.

Utthan’s experience has clearly demonstrated that women’s right to land has far-reaching, instrumental effects on the lives and livelihood of women and their families. Its vision for land rights is embedded in its integrated approach towards land rights, livelihood, and commitment towards the environment. Contributing to strengthening women’s self-esteem, decision-making, and leadership, it empowers them to draw their own trajectory and a better future for their future generation. Today, Lataben’s two children –– a son and a daughter – are completing their senior secondary education. She has aspirations for their higher education and has aspirations for her produce. With her journey, Lataben is inspiring many women farmers today to demand their land rights and to carve out their own destinies.

Utthan is a grassroots-based non-profit modeled around gender just and inclusive community empowerment. It employs Institutional Building and Leadership Development as key to bringing change in exploitative power relationships and realisation of rights, across its interventions around Gender, Justice, Livelihoods, Water & Sanitation. Utthan’s grounded experience of four decades clearly testifies how this leads to socio, economic and political change for those at the margins. It has developed several just and equitable demonstrations, both technical and social, around people’s institutions as a mechanism to lend sustainability with a clear multiplier impact. Utthan views its growth embedded in a strategy of Deepening Existing Efforts and Influence & Scaling Up, while still holding innovation, experimentation and learning as extremely relevant.

This story was originally published at Our Land Our Story.