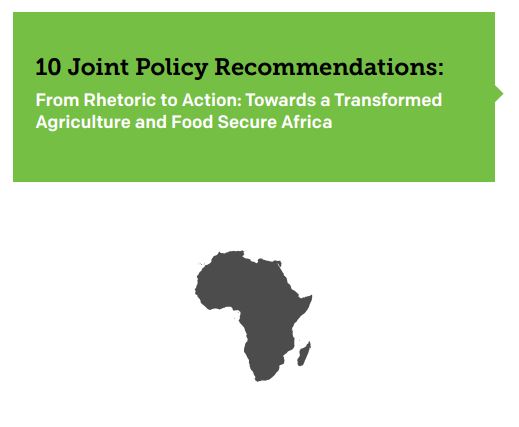 In 2003, the Maputo Declaration of the African Union stated that, within five years, 10 per cent of budgets of member states would be dedicated to agriculture. Ten years on, despite spending increases by some countries African governments still allocate an average of only 4 per cent of their national budgets to agriculture. Only eight out of 54 countries under the African Union have consistently reached the 10 per cent target. This failing is largely contributing to the low development in the food production sector and food insecurity in Africa, where 223 million people (a quarter of the population) live in hunger

African Heads of State and Government have designated 2014 as a Year of Agriculture and Food Security. African farmers, other small-scale producers (including o farmers, pastoralists, fisher folk and forest-dwelling people), alongside civil society organisations, have issued this policy brief with 10 recommendations to African governments.

Recommendation 5 is to eliminate the gender and youth gap in agriculture - including by strengthening women’s land rights and placing more emphasis on ensuring that women are treated equally under the law and in practice, especially on secure land access, control and ownership.

Recommendation 6 is specifically related to land rights, recommending that small-scale producers land rights be strengthened through improved resources for land governance and adoption and implementation of the AU ‘Framework and Guidelines on Land Policy in Africa’.

Founded over 30 years ago, ACORD is one of the oldest and largest Pan-African organisations. We work in 17 African countries to promote social justice and lift Africans out of poverty. ACORD works with more than one million Africans and 2000 partners on the continent and worldwide.