The history of land acquisition in India is chequered, its implementation questionable, and compensation is only a matter of perspective. A farmers’ organisation has been arguing that the country doesn’t need more land laws but a restoration of the fundamental right to property. Does the argument hold water 41 years after the right was diluted?

An examination of reality on the ground will make things clearer.

As the sun sets, after the temperature touches a dizzying 47° C in the afternoon, Panaj village in Maharashtra’s Akola district comes to life. Few farmers with cotton scarves knotted on their necks, gather, and a range of discussion from the monsoon, minimum selling price, genetically-modified seeds to farm-loan waivers spirals.

At some point, a farmer says, "Main kapaas ugata hoon toh puri duniya kapde pehenti hai, phir meri laash kyun kafan ke liye tarasti hai? (The cotton I grow clothes the world, then why does my corpse yearn for (the money to buy) a shroud?" Most nod gravely, some squeeze his shoulders to comfort him.

Another informs, to no one in particular, that there is a way out: Sell your land and find work in a city.

It’s common knowledge that a majority of India’s 118.9 million cultivators are poor, miserable and want to leave agriculture. But few can point out the exact reasons. After all, the governments have been generous on paper: Farmers not only receive a full tax exemption; government after government has offered an abundance of subsidies in fertilisers, seeds, electricity, and water. There are also provisions for price support, low-interest loans, crop insurance, and recurrent promises of loan waivers.

Most experts blame corruption and shoddy implementation of existing laws and schemes for India’s anachronistic state of agriculture, but a small farmers’ organisation, the Shetkari Sangathana, is reweighing the situation.

“The rural land market is non-existent," Lalit Bahale, a farmer from Akoli Jahangir in Akola district and a member of the Shetkari Sanghatana, says. Bahale is taking forward the legacy of the organisation’s founder Sharad Joshi who strove for free-market policies for agriculture. “In most Indian states, farmers cannot sell their land to non-farmers,” Bahale continues. "Even if farmers themselves want to buy more land, the land ceiling laws stop them.”

It’s not surprising that no such restrictions apply to governments when they want to acquire land for contentious public purposes—broadly interpreted as projects that are ‘likely to prove useful to the public’.

The government has had an uninterrupted reign with land acquisitions for many decades, and only recently has their unbridled existence been challenged. In 2013, the Land Acquisition Act, 1894 was repealed and replaced with the Right to Fair Compensation and Transparency in Land Acquisition, Rehabilitation and Resettlement Act (LARR). It was hoped that the LARR would redress the dismal trajectory of land acquisition in India. But over the past few years, some states have diluted the law and exempted certain sectors from conducting social impact studies, cost-benefit analyses, and getting farmers’ consent for some public projects.

Sanghatana leaders like Bahale say that the problem goes further back to 1951 when the dilution in property rights began in India. "Property rights were abolished as a fundamental right by the Forty-Fourth Amendment Act, 1978. This gave governments unchecked powers to exert control over land."

Bhikaji Shankarrao Shirshole’s 3.45 acre unirrigated land in Panaj first came under the government scanner in 2011 when vast swathes of land were being acquired for the Shahapur Bruhath dam project. “They asked me to hurry up and accept the offer or else my farm would be submerged,” Shirshole says. “I was scared, and gave in.”

As soon as Shirshole conceded, documents were brought, and a corner of each page was lifted for his signature. Shirshole’s initials were taken on “18 sheets” and he was locked out of his land where cotton was earning him roughly Rs 1 lakh a year. Then, a cheque of Rs 9 lakh was placed on his palm.

About three years later, the LARR would be enforced and per acre compensation would almost quadruple. But Shirshole didn’t have the choice or option to keep his land or sell it to a higher bidder later.

With three growing children, now ages 16, 14 and 12, the money quickly dried and soon, Bhikaji had to find other sources of income.

"From a landowner, I'm now earning money by being a labourer," he says.

Two years ago, six years after Shirshole and some other farmers handed over their land, construction began and the dam was fully built.

But unlike what was claimed, “no farmland has sunk out of sight underwater", Shirshole says, “because it hasn't rained”

Shirshole is, however, far more anguished because he thinks he was cut a raw deal.

In 2013-14, his neighbour, Gajanan Shahdeo Wankhede, 54, got Rs 48 lakh for his four-acre irrigated land because of the new land acquisition law. "I, too, should have got a better price," Shirshole rues. "Everyone in the village told me I should have waited but I was frightened and the cheque was handed on the spot." 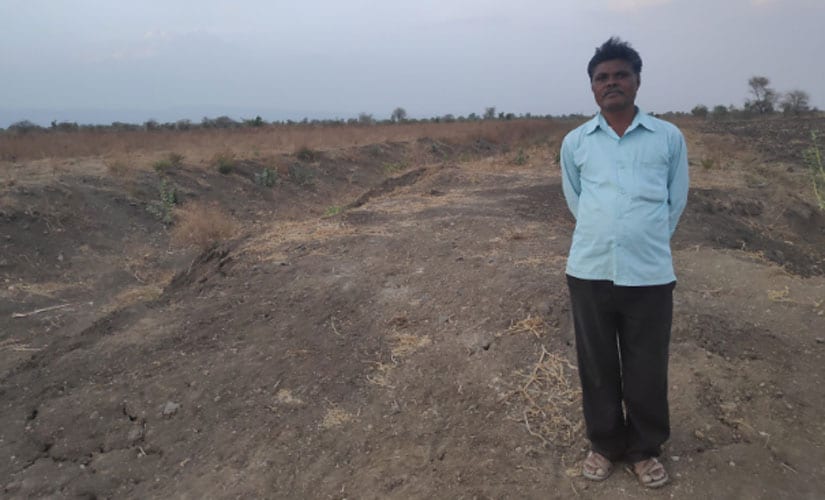 Since then, Shirshole sympathises with the Sanghatana and has started to believe in fair prices, a right to property and a right to trade land. "If anyone could buy my land the way I buy something from the market, perhaps I would have been in a better position now."

A report by economist Ram Singh, a rare study reviewing court judgments on land acquisition, notes that compulsory land acquisition is inevitably “prone to litigation over compensation which was both inefficient and socially regressive in its effects”. The study’s evaluation of Delhi’s district courts' judgments finds that in “86 percent of the cases, the compensation awarded by the district courts were greater than the compensation awards by the government”.

Clearly, the only alternative for farmers like Shirshole for better compensation is to spend a greater sum and approach the courts. But he can’t afford it and remains affected by the manner in which bureaucrats, and not the buyer or seller, decide on compensation. A Centre for Policy Research (CPR) report, the only study which reviews Supreme Court cases related to land acquisition from 1950-2016, earmarks the problem: the “collector continues to apply the circle rates in defiance of the court orders (of using market rates)”.

Apart from the low circle rates, farming is unprofitable and agricultural produce brings paltry prices. Thus when a new project is announced, Shirshole says, “most farmers are willing to let their land get acquired".

Can a fundamental right to property, then, be the needed remedy?

Principally, thinks Barun Mitra, the founder and director of the Liberty Institute, it’s essential. Fundamental rights safeguard freedom and “provide an additional instrument in the hands of people to go directly to the Supreme Court”, but at the same time, Mitra is questioning whether it will be sufficient to hold the law if there are social and political contradictions around the idea of property rights.

Namita Wahi’s research at the Land Rights Initiative at CPR speaks about scepticism, too. “Even before 1978, when the right to property was a fundamental right, state acquisition of land for private industry was routinely upheld as a valid public purpose," she writes. As time passed, the list of public purposes expanded to include acquisitions for SEZs, cooperative societies, private recreational projects and residential development—“all of which have been upheld by the Supreme Court”.

Even with a fundamental right, then, reasonable restrictions around acquiring land for public purposes could stand, but for Bahale, that’s acceptable. “The reasonable restrictions could be seen as those absolutely essential for security and public benefit, while farmers, at large, would be free to control, expand, reduce and therefore, set price for their own land. The freedom also means that the government would not acquire land to hand it over to private companies. They could bid directly to the farm owner.”

Yet a right alone is unlikely to overhaul agriculture or drastically improve incomes, unless, Mitra says, “A lot of laws governing land use, their sale or purchase, or farmers’ access to markets and technology are modified."

Meanwhile, farmers like Shirshole are starting from scratch: working as a labourer and saving to be able to buy a patch of land. “The journey is long,” Shirshole concludes, “as long as the devastating summer or wait for monsoon in Vidarbha.”