Ignoring environmental laws in Timor-Leste to build a petroleum infrastructure project could mean serious problems for communities including environmental destruction, loss of land, and loss of livelihoods. Communities are already facing some of these problems because project proponents haven’t fulfilled their legal obligations to do extensive environmental research and planning to mitigate any damage to the local environment. The supporters have also failed to meaningfully involve local communities, including interested experts, academics, and civil society groups, in this process.

By law, no large-scale project should be started until this process is completed and the national environmental authority approves the project. Implementation of these laws, however, has been extremely limited, but national NGOs and community groups are working to change that.

As a new nation emerging from long-term conflict, Timor-Leste has faced various, serious challenges in the process of state and nation building, including widespread trauma and limited experience with institution building and democratic self-government. For 400 years, it was an island colony of Portugal. During World War II, Australia and Japan waged war on the island. And from 1975 to 1999, Indonesia’s illegal military occupation committed many abuses and crimes against humanity—against the Timorese people.

Although Timor-Leste achieved full independence in May 2002, the government has yet to solve several social and economic problems: widespread malnutrition, unemployment, poverty, and inadequate access to basic services in both rural and urban communities.

To respond to these concerns and demands by international institutions, the government adopted the National Strategic Development Plan 2011–2030 (NSDP). The plan is presented as a guide to orient state policies and programs. It provides extremely optimistic goals for grassroots economic development, improving people’s lives, and raising the economy to “upper middle income level” before 2030.

Unfortunately, this plan’s ambitious vision is unrealistic. Already, from 2005 to 2019, the government spent $11.8 billion from the Petroleum Fund, which holds income from national petroleum sales to benefit both current and future generations. The money was channeled to annual state budgets allocated for government priorities. Yet significant improvements in ordinary people’s lives haven’t followed.

The plan describes the need for the government to make and follow environmental laws to ensure the environment is protected, recognizing the age-old relationship between our ancestors and the natural world. It presents three major priorities related to the economy: agriculture, tourism, and petroleum. However, the priority to which the government has given the most attention and vast resources is the petroleum sector, specifically the Tasi Mane project.

The Tasi Mane (the local name for the Timor Sea between Timor’s southern coast and Australia) project represents the centerpiece of Timor-Leste’s development strategy—building a corridor for petroleum infrastructure and industry. The massive project is described in the NSDP as “a multi-year development of three industrial clusters on the south coast which will form the backbone of the Timor-Leste petroleum industry.” After market studies related to the Tasi Mane project were conducted in 2010, construction began in 2011. 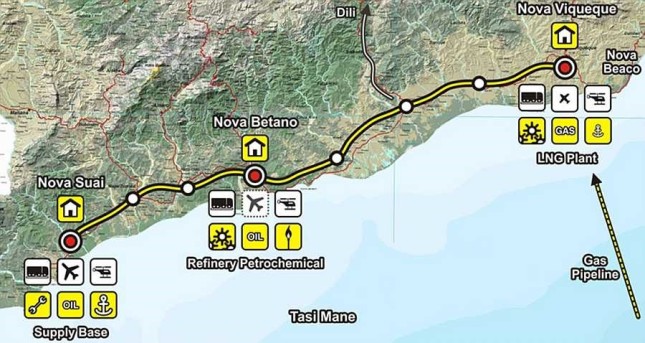 The components of the project are to cluster in three locations that will be connected by a mega-highway:

Since the start of development for the Suai Supply Base in 2011, many communities in the project area have faced problems and difficulties. While laws require meaningful public consultation, project supporters didn’t follow these mandates. The result? Uninformed communities and a lack of critical oversight and input. Many people lost their land, which the government took over for the project. Due to the loss of agricultural land, many farmers cannot feed their families and secure their livelihoods. Furthermore, farmers from several towns are now unable to access their farm land or sacred land for rituals because of the mega-highway’s placement.

The public consultation and environmental study for the Suai Supply Base and the mega-highway were not conducted with care. They didn’t meaningfully involve affected communities or interested parties, such as NGOs and academics, soliciting their thoughts and concerns in the initial planning phase of the project. The consequences of this lack of input are evident. We now see preventable disasters such as increased flooding due to the highway construction and a section of the highway breaking apart due to soil erosion.

Project proponents often present these problems and further risks as small and fixable. But similar experiences in communities in other countries suggest otherwise. Gas line explosions kill, and oil spills impact both sea- and land-based ecosystems, taking generations to clean. Toxic pollution of soil and water destroys agricultural production and kills animals, while air pollution seriously threatens people’s health. These disasters could happen in the Tasi Mane project if our leaders and project implementers don’t learn from other countries and from the limited experience already gained from the Tasi Mane project.

The government often claims that money from the Petroleum Fund will solve all problems, by, for instance, compensating communities whose land is taken away. Money, however, is not always the right or adequate solution to resolve environmental problems or other problems which communities face. What’s more, our Petroleum Fund is estimated to run out in less than one decade, if current spending trends continue. Passing out money now is not a sustainable path to ensure we will improve people’s lives now or in the long term.

To ensure the project does not harm the environment, a movement of civil society groups and NGOs is forming to pressure the government and project proponents to carry out best practices related to environmental protections and implementation of Timor-Leste’s environmental laws. These laws must be an integral part of government planning and precede the start of any large infrastructure project because they offer valuable protection to communities by minimizing social and environmental risks. The government has a responsibility to educate communities about these laws, so that they can defend their rights and ensure that any project or industry in their area does not have an unreasonable negative impact in the future.