Greenpeace slams Indonesia for lack of action against the palm oil sector as vast areas of forests burned in five years.

Tropical forest and peatland areas bigger than the Netherlands have burned in Indonesia in the past five years, Greenpeace has said, lambasting President Joko Widodo’s government for allowing the pulpwood and palm oil sector to act with impunity despite bearing “considerable responsibility” for the fire crisis.

In a new report on Thursday, the prominent environmental group said some 4.4 million hectares (9.9 million acres) of land have burned in Indonesia between 2015 and 2019.

About a third of those areas were located in palm oil and pulpwood concessions, it said, citing an analysis of official maps.

However, despite government promises to punish companies found to be deliberately burning concessions – particularly in the aftermath of the 2015 crisis that caused trans-boundary haze, affecting tens of millions of people across Indonesia, Malaysia and Singapore – “palm oil and pulp firms continue to operate with few or no sanctions”, Greenpeace said.

Further exacerbating the situation, Indonesia’s government and legislators recently passed a new law that dismantles environmental protections, Greenpeace said. The “omnibus” Job Creation law, drafted with the involvement of the plantation sector approved by parliament earlier this month, weakens liability for environmental crimes, the group said, as the “palm oil and pulp sectors will be relieved of responsibility for prior damage they have inflicted on Indonesia’s peatlands”.

The law – which drew huge protests in Indonesia over fears of weakened labour rights – will also protect the plantation sector from future liability for damage to the environment and fires in their concessions, the report said.

“Palm oil and pulp multinationals have practically set the rules in recent decades. Year after year they have broken the law by allowing forests to go up in flames, yet they evade justice and go unpunished,” said Kiki Taufik, global head of Greenpeace Southeast Asia Forest campaign.

“Measures like the pro-business ‘Omnibus Law’ that ignore people and see nature as a bottomless resource to be extracted for short-term profit, can only have a catastrophic outcome for human health, human rights and the climate,” he added, urging the Indonesian president, who is also known as Jokowi, to end “this madness” and veto the law. 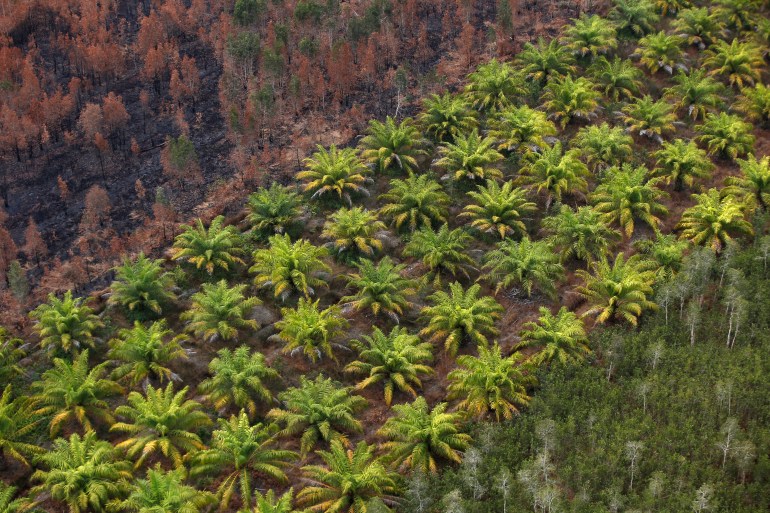 Indonesia, which has the biggest forests outside the Amazon and the Congo, is the world’s largest producer of palm oil and each year fires are linked to slash-and-burn practices used to clear areas for palm oil cultivation.

Three of the five companies, Greenpeace said, had the largest burned areas in their concessions from 2015 to 2019 are suppliers to Indonesia’s biggest conglomerate, Sinar Mas Group, and one of the country’s largest pulp and paper companies, Asia Pulp & Paper (APP).

A spokeswoman for APP, which is part of Sinar Mas Group, told Reuters news agency that APP has spent $150m on a fire management system, and that it continues to help local communities transition away from slash-and-burn land clearing towards more sustainable methods.

Indonesia’s Ministry of Environment and Forestry did not comment immediately.

In February, Widodo told government officials to find a permanent solution to the annual fires, and ordered more frequent patrols on the ground by security personnel across the country, especially in fire-prone areas.

But in June, the environment ministry said, it had to scale back fire patrols because of budget cuts owing to the coronavirus pandemic.