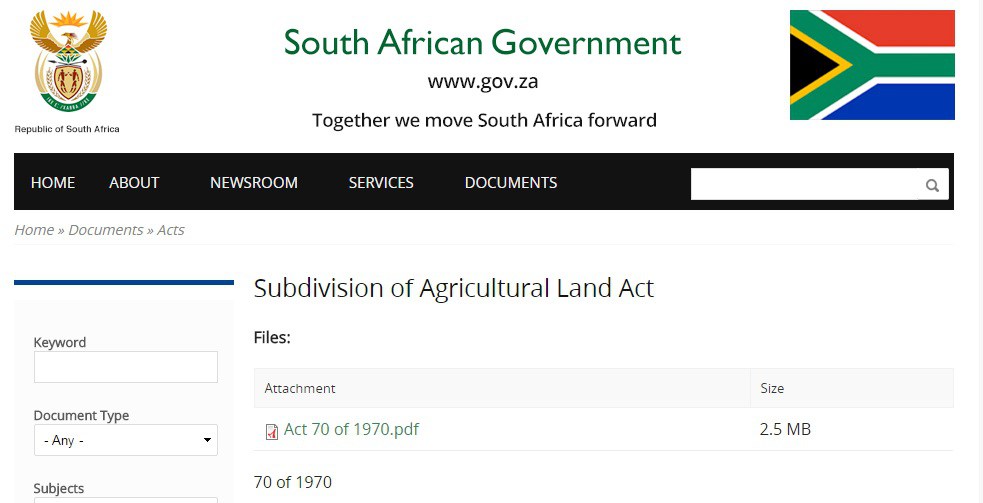 BE IT ENACTED by the State President, the Senate and the House of Assembly of the Republic of South Africa, as follows:-
1. In this Act, unless the context otherwise indicates(i) “agricultural land” means any land, except-
(a) land situated in the area of jurisdiction of a municipaL council, city council, town . council, village council, village management council, local board, health board or health committee, and land forming part of, in the province of the Cape of Good Hope, a local area established under section 6 (I) (i) of the Divisional Councils Ordinance, 1952 (Ordinance No. 15 of 1952 of that province}, and, in the province of Natal, a public health area as defined in section 1 of the Local Health Commission (Public Health Areas Control Ordinance, 1941 (Ordinance No. 20 of 1941 of the last-mentioned province), and, in the province of the Transvaal, a local area Committee established under section 21 (1) of the Transvaal Board for the Development of Peri-Urban Areas Ordinance, 1943 (Ordinance No. 20 of 1943 of the Transvaal)

Dutch traders landed at the southern tip of modern day South Africa in 1652 and established a stopover point on the spice route between the Netherlands and the Far East, founding the city of Cape Town. After the British seized the Cape of Good Hope area in 1806, many of the Dutch settlers (Afrikaners, called "Boers" (farmers) by the British) trekked north to found their own republics in lands taken from the indigenous black inhabitants. The discovery of diamonds (1867) and gold (1886) spurred wealth and immigration and intensified the subjugation of the native inhabitants.