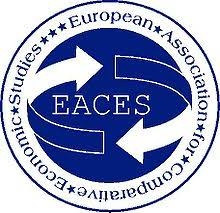 In an International Conference held in Urbino (Italy) in 1989 a large number of European economists doing research in the field of comparative studies decided to build a new European association in order to further research and scientific exchanges on the subject.

There was, therefore, the establishment of a large promoting committee and of a more restricted organizative committee with the aim to prepare for the founding Conference of the Association. The founding Conference was held in Verona (Italy) on 27-29 september 1990 and saw the participation of around 160 economists of 24 different countries.

About 40% of partecipants were from Eastern Europe and the Soviet Union. The countries rappresented were: Austria, Belgium, Bulgaria, Czechoslovakia, Denmark, Finland, France, Japan, Germany (both Western and Eastern Germany), Hungary, India, Israel, Italy, Netherland, Poland, Romania; Spain, Sweden; Switzerland, Turkey, United Kingdom, Usa, Ussr, Yugoslavia. The good scientific level of the Conference and the friendly and informal atmosphere provided by the organizer contributed to a brilliant start of the Association.

The First General Assembly of EACES, held on September 27, 1990, approved the Statute and elected Vittorio Valli (University of Turin) for the post of President. On the following day with a secret ballot there was the election of the other members of the Executive Committee on the basis of a list of candidates freely chosen by EACES member. Seven countries were represented in the executive committee. The status of host country probably contributed to an over rappresentation of Italy in the committee, but the rotation of officers and of the location of general Conferences will correct this imbalances in the future.

The Association was formally registred at a public notary in Turin (Italy) on January, 31, 1991.

Since its foundation the Association has organized nine general Conferences (see Conferences) and a number of specialized workshops in several countries.
The membership has increased to a total number of about 400, including 9 institutional members.

Like land before the industrial revolution, in the present global economy much knowledge is being enclosed in private hands. In this paper we argue that these enclosures have become a major factor in specialization among firms and among countries: both are forced to specialize in the fields that are not restricted by the enclosures of the others.

Abstract: The article attempts to define the relevant yardsticks that can be used to delineate the end of the transition process or, alternatively, a second stage in the post-socialist economic transformation into market capitalism. A first benchmark is EU accession, but it does not apply to non accession transitional economies.