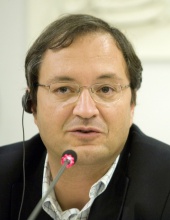 Francisco Sarmento, Angolan, is an agronomist with an, MBA, a PhD in the Social Sciences and a Post Doctorate degree in Food System Governance. Mr. Sarmento has 25 years of work experience in the area of food security and rural development, including land related issues. He is the former CEO of Agrosuisse, a Brazilian consultancy company and the former head of the food rights theme at Action Aid International. He played a key role in the organization of the World Forum on Agrarian Reform in Valencia, Spain, in 2004 and in the coordination of several studies that were presented during the International Conference on Agrarian Reform and Rural Development in Porto Alegre, Brazil, in 2006. Mr. Sarmento is one of the founding members of "Land Tenure.info", a pre-cursor to the Land Portal, and has served as a member of the steering committee of the Land Portal partnership since its inception. He is currently doing research, teaching, and acting as an independent consultant for national governments in the South and for international organizations such as FAO and the European Commission.