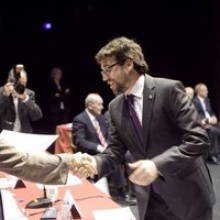 Carlos joined the Land Portal as Data Officer in January 2016. He is a Linked Open Data specialist with wide knowledge and expertise in semantic web technologies, computer science, software design and development, human computer interaction, productivity and networking. He has previously worked for Previously the Fundación CTIC as a researcher of the Semantic Technologies Unit, and has taken part in several national and European R&D projects and initiatives. He holds a Masters of Science in Engineering and Computing Science from the University of Oviedo.

The Fondo Ecuatoriano de Cooperación para el Desarrollo (FECD) is a private, not-for-profit organization that works to improve in a sustainable manner the living conditions of the most vulnerable groups in Ecuador, through integrated development proposals.

Friends of the Nation (FoN) is a non-profit-making, non-governmental organization (NGO) involved in socio-environmental advocacy that was established in October 1993 and headquartered in Adiembra in the Sekondi-Takoradi Metropolis of the Western Region of Ghana.The organization has three program areas namely, Natural Resources Management, Community Development and Enterprise Development.

The Friedrich Naumann Foundation for Freedom (Friedrich-Naumann-Stiftung für die Freiheit) is the foundation for liberal politics in the Federal Republic of Germany. It aims to promote the goal of making the principle of freedom valid for the dignity of all people and in all areas of society, both in Germany and abroad. With the safeguarding and the development of its statutory projects (civic education and dialogue, sponsorship of the talented, research and political consultation, archive-work), the Friedrich Naumann Foundation wants to contribute to shaping the future.

ClientEarth is an environmental law charity, with offices in London, Brussels, Warsaw, Berlin, and Beijing. It was founded in 2008 by James Thornton. As lawyers and environmental experts, they use the law to hold governments and other companies to account over climate change, nature loss and pollution

The idea behind Well Grounded came from the experience of the two founder members. Cath Long and Iola Leal had both been working for a long time with civil society organisations in tropical countries that focussed on community rights and the sustainable management of natural resources. And although they both met many inspirational and dynamic individuals and groups who were doing extraordinary things, they realised that these same people and groups kept running up against barriers that stopped them from scaling up what they were doing and having the impact they hoped for.

Founded in 1981, International Procurement Agency B.V. has grown to become one of the leading organisations in providing superior supply, procurement, consultancy services and emergency response on a global scale to principals in all parts of the developing world on a strictly independent basis.

IPA closely adheres to the specific rules and guidelines set out by its principals. Our staff is well versed in the comprehensive procurement regimes and project management methods of the various bi- and multilateral donors.

Hen Mpoano (Hɛn Mpoano) is a not-for-profit organization legally registered in Ghana since 2013 and based in Takoradi in the Western Region. Between 2009 to 2013, we existed and operated as Coastal Resources Center- Ghana, with affiliation to the Coastal Resources Center of the University of Rhode Island, USA. During this period, we led the implementation of the USAID-funded Integrated Coastal and Fisheries Governance (ICFG) Initiative for the Western Region of Ghana.