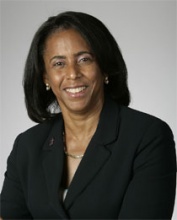 Elizabeth Stair was appointed  Chief Executive Officer of the National Land Agency (NLA) in September 2000 and Commissioner of Lands in 2001.

As the NLA is a merger of the land administration functions in Jamaica, she is responsible for surveys and mapping, land titles, valuations and the management of Crown Lands.

Mrs Stair studied at the Polytechnic of the South Bank, U.K. where she was awarded a BSc in Estate Management. She is a member of a number of local and international associations:

She currently serves on several boards:

Mrs. Stair is also a Part-Time Lecturer in the Faculty of the Built Environment at the University of Technology, Jamaica and is an Assessor for the Royal Institution of Chartered Surveyors.