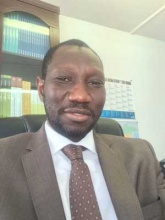 Oumar holds a Master’s degree in Local Government Law from Saint Louis University in Senegal, as well as two other MA’s: in African Legal studies and legal anthropology focused on land and natural resources from Paris 1 Sorbonne and in Territorial Project Management from Paris 13 Creteil.

He brings to GLTN a very rich experience, both academic and practical, in land, natural resources, conflict resolution, urban development and planning, urban safety and security, slum upgrading, regional cooperation and partnership. Oumar will continue the efforts towards expansion of the GLTN work and networks at the country level and advocating for a wider incorporation of land governance in the overall urban agenda, to bridge the gap between rural and urban towards improving tenure security for the vulnerable.

Prior to joining Land and GLTN Unit, Oumar served as a Senior Advisor in UN-Habitat’s Regional Office for Africa where, among other things, he coordinated a regional program to strengthen the capacity of member states in the Great Lakes Region to deal with land and property issues related to displaced persons in support to the ICGLR secretariat and to the Peace and Stability Framework for the Great Lakes Region.

Before that, he supported implementation of the GLTN programme and managed UN-Habitat land program in DRC in a peace building context as Chief Technical Advisor. He helped build mechanisms and tools to deal with land disputes and improve land governance, supported the government of DRC to develop a participatory road map for a comprehensive land reform and supported the land administration and National Land Reform Commission.  He also coordinated capacity development and advocacy, supported coordination of development partners, partnership building and fundraising.

He also has experience with the European Union framework, which he gained as a Land Policy Advisor in South Sudan and Burkina Faso and he was a Researcher Fellow within the Laboratory of Legal Anthropology in Paris 1 Sorbonne, mainly working on land and decentralization policies in West Africa.

Oumar was born in 1969 in Thies, Senegal. He is married and a father of two daughters.

This July is the first time the United Nations will review the progress made towards meeting Sustainable Development Goal 15, which is about Life on Land. Each goal will be reviewed about every 4 years until 2030.

The reviews will be based on the 10 indicators countries agreed on, that assess change in each country over time. Two important developments relating to the indicator on land degradation neutrality (15.3.1) have occurred, since its adoption in 2015.

On behalf of UN-Habitat, particularly the Land and the Global Land Tool Network Unit, which also serves as the GLTN Secretariat, I was pleased to present some key messages at the third Preparatory Committee Meeting of Habitat III.