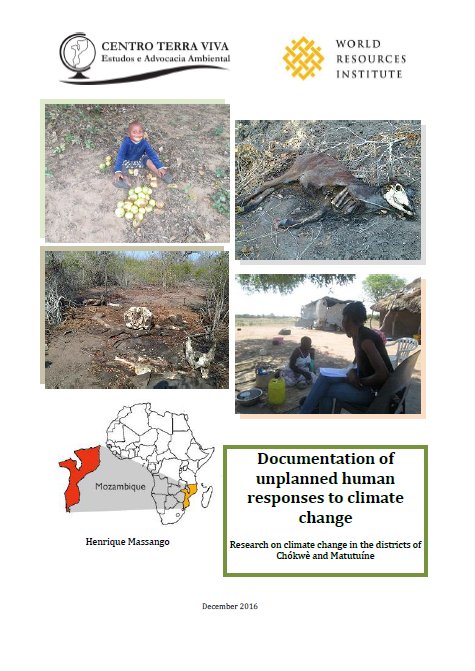 The Centro Terra Viva (CTV), in partnership with the World Resources Institute (WRI), promoted the implementation of the project on ‘documentation of unplanned human responses to climate change’. This project was part of a more general WRI approach, involving other countries, to research how communities in Africa are responding to climate change and the effect of these responses on the environment and biodiversity.

The project was conducted in two districts previously selected by the CTV, namely Matutuíne and Chókwè, in the provinces of Maputo and Gaza respectively, which show significant differences in relation to the population's livelihoods (agriculture, fishing or livestock), climatic impacts and geographical characteristics.

The research, conducted through interviews to key informants, explored themes such as: (i) changes in felt and observed in weather conditions and in the climate, (ii) impacts of these changes and observed responses in terms of livelihoods, and (iii) impacts of human responses to biodiversity.

In general, the implementation of the project followed a few basic principles that guide the work with communities, namely a presentation to local governments and community leaders, the use of female interviewers to facilitate the participation of women and the use of an open approach such as conversation during interviews.

This report presents a brief description of the areas selected for the project, the results of the interviews carried out and an analysis of the data obtained.

The World Resources Institute is a global environmental think tank that goes beyond research to put ideas into action. We work with governments, companies, and civil society to bui