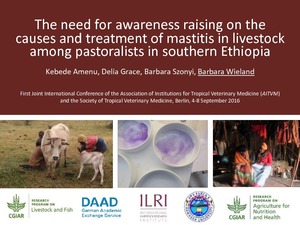 species and production systems and these contribute substantially to poor

productivity in affected herds. Thus far, studies have focused on identification of

livestock health problems in general and mastitis in particular. An accurate

control programs that give due consideration to the livestock keepers. As a first step,

surrounding the causes, clinical signs and treatments for mastitis in (agro-) pastoral

communities in southern Ethiopia. In four village administrations of Yabello district of

members. The data was analysed qualitative by repeated reading to identify different

themes. Mastitis is locally known as ‘dhukkuba muchaa”, which translates to ‘disease

leading to nyaqarsa. Our analysis also revealed a strong perception that acute

during late pregnancy and early lactation. The pastoralists often treat mastitis by

combining both modern and traditional methods. Hand removal and acarcide

revealed that specific herbs, only known by the herbalists, were used for traditional

treatment of mastitis and although this information could not be divulged at the time,

it should form the subject of further investigation. Traditional treatment for evil eye

was often administered through nostrils, raising questions about its effectiveness. It is

interesting that the pastoralists associated mastitis to tick infestation which is

compatible with existing scientific evidence. However, the misperception of causes

appropriate treatment and management of the disease is concerned and highlights

the need for capacity building on causes of mastitis and how they can be treated.