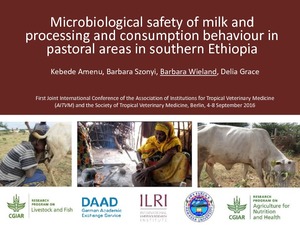 the microbiological quality and safety assessment of milk and traditional dairy

that women are customarily involved in milk handling and processing. Individual

semi-structured interviews, focus group discussions, and observations were used to

quality and safety of milk including perceived criteria for good milk, (3) assess

awareness on milkborne diseases, and (4) evaluate milk boiling practices. The

which later were transcribed and analysed by identifying the themes. For the

microbiological assessment, a total of 203 samples: 145 pooled milk, 40 directly from

Staphylococcus aureus). The result showed that cow milk is processed into different

products such as ititu, butter milk, butter and ghee. Goat milk is either directly

consumed by children during herding or added to tea instead of further processing.

volume especially during dry season and widely consumed and marketed fresh. Most

that “vitamin is destroyed when boiled” and “boiled milk is considered as dead”. On

the other hand, milk is usually consumed with tea by adding the milk into hot boiled

and filtered tea. Women mentioned smoking as a way to ensure quality, shelf life and

safety of milk and traditionally produced dairy products. However, observation of milk

of these. In addition there is a need to closely engage with local communities to