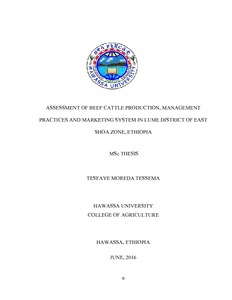 Study was conducted to assess beef cattle production, management practices and marketing system in Lume district, East Shoa Zone, Oromia. Traditional, semi-intensive and intensive beef cattle production and marketing system were considered for the study. For this purpose 120 respondents were included based on discussions with district livestock experts, 1 kebele for intensive; 2 kebeles from semi-intensive fattening systems were purposively selected as they are the only kebeles practicing intensive and semi-intensive fattening in the district. From the traditional system, three kebeles were randomly selected. Structured and semi-structured questioners were used to collect data from sampled households. In addition the performance of beef animals and chemical composition of major feedstuff were evaluated on eleven purposively selected feedlots and households (2 intensive feed lots, 3 semi-intensive and 6 from traditional). Major feed resources used from the 11 households involved in body weight monitoring were collected and chemical composition determined. From the interviewed households, 100%, 85%, 75%, 63%, and 55% of them use crop residues, aftermath grazing, grazing from communal, roadside and riverside areas, respectively. The majority of the respondents (82.5%) provided additional supplement for their cattle during dry season. Traditional fatteners commonly used noug cake (72.2%) and local brewery by-product (70%) as the main sources of feed. During wet season the major feed resources was grazing (76.3%) while during the dry seasons, tethering (49.1%, free grazing (41.6%) and cut and carry system (1.6%) were the main feed resources. The majority (82.5%) of the farmers supplement cattle during dry season which was provided once a day (44.2%), twice a day (21.7%) and whenever available (34.2%).Traditional fatteners mainly use their own animal for fattening from their herds. The semi-intensive and intensive fatteners purchase fattening animals from another source. The most preferred animal for fattening was old oxen (56.7%) in the traditional fattening system while young bull (20.8%) was used in semi- commercial and intensive fatteners. Cattle were fattened once, twice and trice a year under traditional, semi-intensive, intensive production systems, respectively. In all production systems, decision of ending fattening period was made based on live weight change. The average length of fattening period was 3-4, 3, 3 months for traditional, semi-intensive and intensive system, respectively. At the market places, the main buyers of beef cattle were local traders (74.2%) in traditional and semi-intensive systems. According to the respondents, reasons for prices variation were involvement of number of traders (75.8%), road and transportation accessibility (15%) and proximity to urban (9.2%) places. The determinants of price of animals (purchased/sold) were breed (29.2%), weight (28.3%), and color (26.7%) and age (15%). The majority of the producers (95.4%) in traditional fattening system and semixviii intensive fatteners (100%) sold their fattened cattle in eye ball estimation at market place, while fatteners in intensive system used live weight to sell their cattle. The majority of the respondents (55%) relay on the information they get from brokers. More than three-fourth of the fatteners in all production systems sell their fattened beef (100%) during holidays. The crude protein content of the feedstuff ranged from 3.79 to 29%. The average daily gain increased (P<0.01) with increasing levels of intensification which was 0.4 kg, 0.53 kg, 0.91 kg for traditional, semi-intensive and 0.91 kg, respectively. The weight gain for intensive fattening was significantly higher than the other two systems. Major constraints that hindered the performance of cattle fattening activity were feed and water shortages, marketing and disease problems. In conclusion, in order to improve the performance of beef cattle, especially under traditional production system, there is a need to supply adequate feed in terms of quality and quantity which could promote the frequency of fattening. Appropriate marketing system should be developed so that farmers can benefit from their business. ====