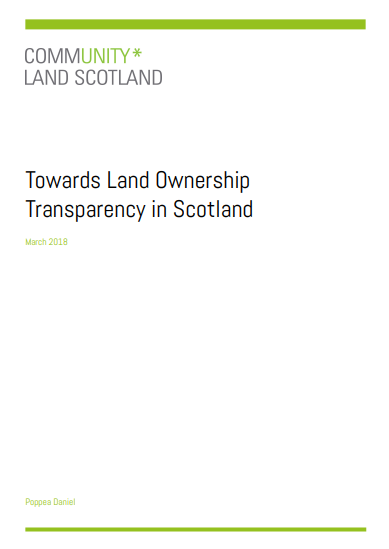 Community Land Scotland (CLS) has today published ‘Towards Land Ownership Transparency in Scotland’, part of a larger study led by Transparency International to test a framework for assessing land ownership transparency within countries.  The framework was presented at ‘Land Governance in an Interconnected World’, the Annual World Bank Conference on Land and Poverty in Washington DC on March 20th.

The report was prepared for Community Land Scotland by Poppea Daniel, an independent researcher.   It concludes:

“There is a long history of land registration in Scotland and a presumption of public access to information about land ownership.

However, there are some key factors which are compromising land ownership transparency in practice. The main, centralised register of land is incomplete and not integrated with other sources containing information about (for example) legal entities which own land.

There is a gap as yet between the desire for a ‘publicly accessible’ land registry and the reality. Access for citizens to anything other than the most basic information is fragmented, expensive and complicated. The apparatus of land registration is focused on keeping information regarding title to land, rather than on the collection and provision of information to enable citizens to hold decision-makers and those who own or control land to account.

If the provisions in Part 3 of the Land Reform (Scotland) Act 2016 are implemented within this existing framework, the benefits to transparency risk being limited.”

“The Scottish Government’s forthcoming Register of Controlling Interests in Land offers a unique opportunity for Scotland to assume a world-leading role in guaranteeing transparency of beneficial land ownership.  The report reveals weaknesses in the existing system for promoting transparency of ownership.  It also shows that lifting the existing veil of secrecy on beneficial ownership of land in Scotland requires the new Register to be comprehensive in its coverage, responsive to the needs of users and, crucially, freely accessible by the public. The Scottish Government has signalled a clear intention to seek to be world leading in its approach to transparency and that is very welcome.  The forthcoming regulations to create a system to reveal secret owners of land need to ensure that the policy ambition for land ownership transparency is matched by a Register that fully delivers this aim.  We stand ready to work with the Scottish Government and Parliament to help deliver a truly world leading approach to land ownership transparency.”

Community Land Scotland was established in 2010 as a response to the need for a collective voice for community landowners in Scotland. It is a company limited by guarantee with charitable status.