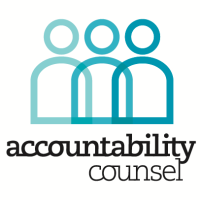 Accountability Counsel amplifies the voices of communities around the world to protect their human rights and environment. As advocates for people harmed by internationally financed projects, we employ community-driven and policy level strategies to access justice.

Why We Are Needed

The very projects meant to lift people out of poverty often have the opposite impact. These projects, such as dams, mines, and oil pipelines are notorious for environmental and human rights abuses, including forced displacement of indigenous people, poisoned rivers used for drinking water, and sexual abuse of women and girls by foreign workers.

The millions of people a year who suffer these types of abuses have few options for recourse. Those who most need access to justice are the ones facing the greatest barriers to information, have the least political power and the fewest financial resources, and lack the professional support required to seek it. Accountability Counsel exists to bridge these barriers for communities and create accountability in development finance resulting in systemic change. Accountability Counsel works to hold nearly $12 trillion a year accountable to global human rights and environmental standards.

We are a global team working from four regions divided equally between the Global South and North. Headquartered in San Francisco, California, we have an office in Washington, D.C., and have regional presences in South Asia and Africa. We partner with organizations and communities around the world.

This guide provides information for communities who are, or who may be, harmed by projects sponsored by financial institutions, development banks and private groups. It is intended to assist community leaders, lawyers, and non-governmental organizations (NGOs) in determining what rights communities have and how they may access accountability mechanisms when those rights have been or may be violated.

These tools may be used where a project has harmed communities or resources on which they depend or when there is fear of harm in the future.