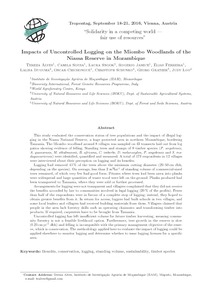 This study evaluated the conservation status of tree populations and the impact of illegal logging in the Niassa National Reserve, a huge protected area in northern Mozambique, bordering Tanzania. The Miombo woodland around 8 villages was sampled on 43 transects laid out from log patios showing evidence of felling. Standing trees and stumps of 8 timber species (P. angolensis, A. quanzensis, M. sthulmannii, B. africana, C. imberbe, D. melanoxylon, P. angolensis and S. madagascariensis) were identified, quantified and measured. A total of 173 respondents in 12 villages were interviewed about their perception on logging and its benefits.

Logging had removed 41% of the trees above the minimum cutting diameter (20-50cm dbh, depending on the species). On average, less than 2 m3/ha of standing volume of commercial-sized trees remained, of which very few had good form. Pitsaws where trees had been sawn into planks were widespread and large quantities of waste wood were left on the ground. Planks produced had been transported to Tanzania, where they were sold or further processed.

Arrangements for logging were not transparent and villagers complained that they did not receive the benefits accorded by law to communities involved in legal logging (20% of the profits). Fewer than half of the respondents were in favour of a complete stop of logging; instead, they hoped to obtain greater benefits from it. In return for access, loggers had built schools in two villages, and some local leaders and villagers had received building materials from them. Villagers claimed that people in the area lack forestry skills such as operating chainsaws and transforming timber into products. If required, carpenters have to be brought from Tanzania.

Uncontrolled logging has left insufficient volume for future timber harvesting, meaning community forestry is not a feasible livelihood option. Furthermore, tree growth in the reserve is slow (0.25 cm/yr dbh) and felling is incompatible with the primary management objective of the reserve, which is conservation. The methodology applied here to evaluate the impact of logging could be applied elsewhere to monitor logging and determine whether to issue logging licenses for a specific area.

Bioversity International is a global research-for-development organization. We have a vision – that agricultural biodiversity nourishes people and sustains the planet.

We deliver scientific evidence, management practices and policy options to use and safeguard agricultural and tree biodiversity to attain sustainable global food and nutrition security.

We work with partners in low-income countries in different regions where agricultural and tree biodiversity can contribute to improved nutrition, resilience, productivity and climate change adaptation.

The University of Natural Resources and Life Sciences, Vienna, or simply BOKU (derived from its German name, Universität für Bodenkultur Wien), founded by the Austrian Empire in 1872, is an education and research centre for renewable resources in Vienna.