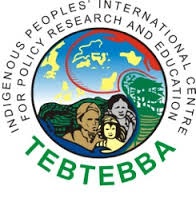 Tebtebba (Indigenous Peoples’ International Centre for Policy Research and Education) is an indigenous peoples’ organization born out of the need for heightened advocacy to have the rights of indigenous peoples respected, protected and fulfilled worldwide. It also advocates and works on the elaboration and operationalization of indigenous peoples’ sustainable, self-determined development. Tebtebba actively engaged in the processes which led to the adoption of international human rights law and other international instruments, policies and agreements. These include the UN Declaration on the Rights of Indigenous Peoples (UNDRIP) and the establishment of spaces within the United Nations, such as the UN Permanent Forum on Indigenous Issues, among others.

Established in 1996, Tebtebba seeks to promote and disseminate widely indigenous peoples worldviews, their perspectives on key issues such as individual and collective human rights, sustainable development, climate change, biodiversity, traditional knowledge, customary laws and governance, conflict transformation, gender, etc. To gather and consolidate such perspectives, Tebtebba brings representatives of indigenous peoples’ organizations, networks and communities together to elaborate and deepen their views and positions and plan out education and awareness-raising campaigns they can do jointly.  These are also venues to further reinforce their capacities to take the lead in policy advocacy and campaigns on all issues affecting them.

Tebtebba, a word used by the indigenous Kankana-ey Igorot of Northern Philippines, refers to a process of collectively discussing issues and presenting diverse views with the aim of reaching agreements, common positions, and concerted actions.

The Indigenous Navigator is a framework and set of tools for and by indigenous peoples to systematically monitor the level of recognition and implementation of their rights. By using the Indigenous Navigator, indigenous organisations and communities, duty bearers, NGOs and journalists can access free tools and resources based on community-generated data.

As indigenous peoples continue to gain more space in the UN system, the real challenge is ensuring the full recognition, respect, protection and exercise of their rights at all levels—and especially at the grassroots level. The UN system therefore needs to put into action its commitment in making the UN a “home” for indigenous peoples.

This handbook is an introduction to the human rights of indigenous women. It provides some detail on the CEDAW as the only instrument specifically for women. It also provides a brief overview of the other available human rights mechanisms.