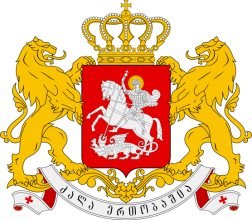 Georgia is a country in the Caucasus region of Eurasia, located at the crossroads of Western Asia and Eastern Europe. After a brief period of independence following the Russian Revolution of 1917, Georgia was occupied by Soviet Russia in 1921, becoming the Georgian Soviet Socialist Republic and part of the Soviet Union. After independence in 1991, post-communist Georgia suffered from civil unrest and economic crisis for most of the 1990s. This lasted until the Rose Revolution of 2003, after which the new government introduced democratic and economic reforms.

The Cabinet of Georgia is an executive council of government ministers in Georgia. It is headed by the Prime Minister of Georgia. In the cases of utmost importance, the meetings may be led by the President of Georgia.

from wikipedia (Georgia (country) and Government of Georgia)

The Resolution lays down health rules for animal products, animal waste and by-products not intended for human consumption, and rules for certification of business operators dealing with such products.

The Resolution creates the authority of the agency granting the recognition of ownership of agricultural/non-agricultural land to persons, entities and other formations which are in a legitimate possession (use) of the land or arbitrarily occupy the land. The document further specifies the procedure to gain such recognition and adopts certificate forms proving the same. It consists of three annexes: Rules for recognizing ownership of land in possession (use) of individuals and private entities (Annex No. 1); and Certificates of recognition of ownership (Annex No. 2 and Annex. 3). Annex No.

The Resolution regulates fertility and conservation of soil. It consists of two charters: Charter for Determining Level of Fertility of Soil (Annex 1) and Charter for Soil Conservation and Fertility Monitoring (Annex 2).

The Resolution regulates removing fertile layer of soil, storing, using and re-cultivating. It consists of four articles: Purpose (1); Definition of terms (2); Main provisions (3); and Control and liability for obligations regarding soil cultivation (4). Re-cultivation is required for impaired soil, among others, by extraction of minerals, installing pipelines, demolishing premises, waste disposal sites etc.