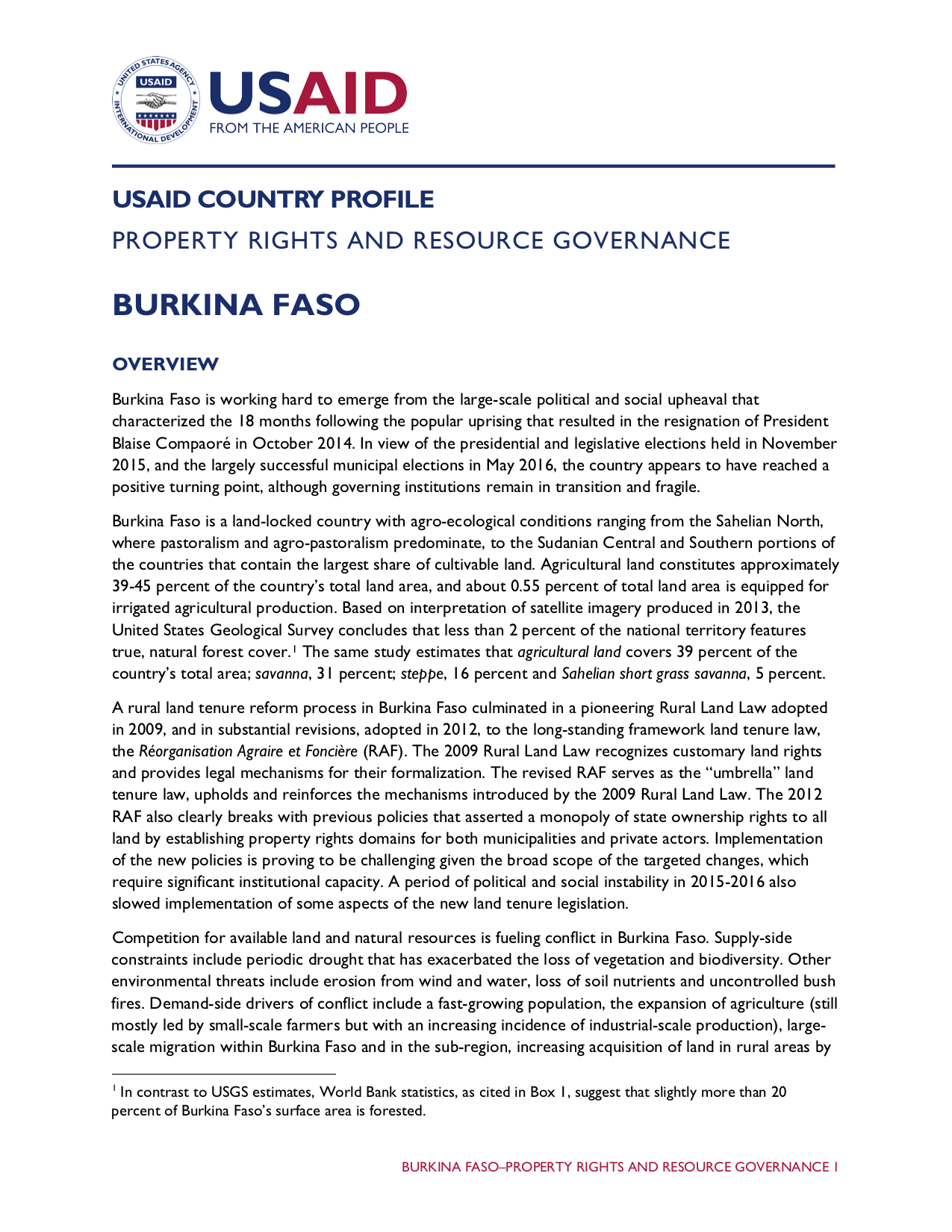 Burkina Faso is working hard to emerge from the large-scale political and social upheaval that characterized the 18 months following the popular uprising that resulted in the resignation of President Blaise Compaoré in October 2014. In view of the presidential and legislative elections held in November 2015, and the largely successful municipal elections in May 2016, the country appears to have reached a positive turning point, although governing institutions remain in transition and fragile.

Burkina Faso is a land-locked country with agro-ecological conditions ranging from the Sahelian North, where pastoralism and agro-pastoralism predominate, to the Sudanian Central and Southern portions of the countries that contain the largest share of cultivable land. Agricultural land constitutes approximately 39-45 percent of the country’s total land area, and about 0.55 percent of total land area is equipped for irrigated agricultural production. Based on interpretation of satellite imagery produced in 2013, the United States Geological Survey concludes that less than 2 percent of the national territory features true, natural forest cover.1 The same study estimates that agricultural land covers 39 percent of the country’s total area; savanna, 31 percent; steppe, 16 percent and Sahelian short grass savanna, 5 percent.

A rural land tenure reform process in Burkina Faso culminated in a pioneering Rural Land Law adopted in 2009, and in substantial revisions, adopted in 2012, to the long-standing framework land tenure law, the Réorganisation Agraire et Foncière (RAF). The 2009 Rural Land Law recognizes customary land rights and provides legal mechanisms for their formalization. The revised RAF serves as the “umbrella” land tenure law, upholds and reinforces the mechanisms introduced by the 2009 Rural Land Law. The 2012 RAF also clearly breaks with previous policies that asserted a monopoly of state ownership rights to all land by establishing property rights domains for both municipalities and private actors. Implementation of the new policies is proving to be challenging given the broad scope of the targeted changes, which require significant institutional capacity. A period of political and social instability in 2015-2016 also slowed implementation of some aspects of the new land tenure legislation.

Competition for available land and natural resources is fueling conflict in Burkina Faso. Supply-side constraints include periodic drought that has exacerbated the loss of vegetation and biodiversity. Other environmental threats include erosion from wind and water, loss of soil nutrients and uncontrolled bush fires. Demand-side drivers of conflict include a fast-growing population, the expansion of agriculture (still mostly led by small-scale farmers but with an increasing incidence of industrial-scale production), large- scale migration within Burkina Faso and in the sub-region, increasing acquisition of land in rural areas by urban-based elites, and an expanding mining sector spearheaded by a boom in gold mining beginning about 2009/2010 and including both industrial and artisanal gold mining. Although the most pervasive category of conflict is that between settled farmers and transhumant herders, an increasingly diversified mix of economic activities and production systems, along with population growth and migration, are leading to a corresponding diversity of types of conflict.