A decades-long struggle that farmers have been waging against multinationals angling to acquire thousands of acres of lush state agricultural land in Bibile for a sugar factory is continuing.

Farmer A.M. Gunabanda says a proposed sugarcane project involving the Government and private companies spells the end for his corn cultivation, which he has engaged in for more than 50 years.

The Mahaweli Authority has informed him that his plot will be used for growing sugarcane, which, he believes, is a crop that depletes nutrients in the soil.

A group of corn farmers from Ekriyankumbura, Bibile is feeling devastated by the proposed sugar factory. They fear adverse social and environmental consequences as well.

“There are a lot of natural springs that never flow in this land and if this proposed sugarcane cultivation project begins, there will be a big impact on the soil quality,” according to Mr Gunabanda.

He has been cultivating land he had inherited and paid taxes to the Department of Agrarian Development. But recently, he had been informed by the department that these lands have been handed over to the Mahaweli Authority.

“We have paid taxes for nearly a decade and sent dues to the Department of Agrarian Development. Even though the Mahaweli Authority obtained the lands, we still pay the taxes to the Agrarian Department,” he said.

There are nearly 169 farmers in Ekiriyankumbura area. According to the farmers, a multinational company has ruined their cultivations.

“Everything was dozered, even the houses and sheds. Even our fertiliser was destroyed,” Mr S.M. Gunapala, another corn farmer said.

Mr Gunapala has nearly 15 acres of land in Ekiriyankumbura and he has spent nearly Rs. 4 million to farm corn every season.

“I haven’t sold a single cob of corn this year. With the uncertainty, we cannot invest. We are scared that the people from the company would come again and destroy our cultivation,” Mr Gunapala said.

He also said the human-elephant conflict in the area has increased because the previous routes of elephant herds have changed. 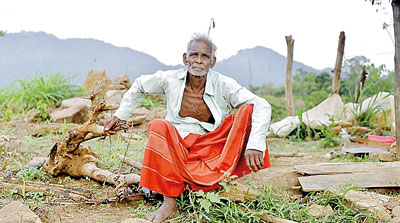 “These companies clear the land and have no idea about the routes elephants had been taking. The government has already sold the land to a multinational corporation, and innocent people like us are bearing the brunt of the consequences,” he explained.

The State Ministry of Wildlife and Forest Conservation (SMWFC) revealed the potential environmental and sociological consequences of the proposed sugar development project.

The archaeological significance of the proposed land was also emphasised by the Department of Archeology. As a result, the project has been held back.

The Bibile sugar production project, which was supposed to start in the Dehigama area of Rideemaliyadda in the Badulla District, has been stalled for the past 17 years due to strong opposition from farmers, the Buddhist clergy, activists, and environmental groups.

Booker Tate, a British company, and later China’s Guangdong Guangken Limited, partnered with IMS Holdings Limited to implement the project in 2006, but left due to several failures. Then Gazelle Venture (Pvt) Limited, a Singaporean company, agreed to invest, with Sri Lanka’s IMS Holdings as the local facilitator and partner.

According to R.B. Thusitha Namal Sanjeewa, a corn farmer in the area, when the Forest Department notified the previous government of the environmental damage under the project, the then-government took over the department’s lands and placed them under the Mahaweli Authority via a gazette notification.

To remove impediments to the project, the Mahaweli Authority Act No 23 of 1979 released the Mahaoya and Padiyathalawa Divisional Secretaries by Gazette no 1130/13 dated 04.05.2000 and the Rideemaliyadda Divisional Secretariat in Ampara district by Gazette no 1130/ 41 dated 02.09.2010 from the control of the SMWFC and declared the areas as Mahaweli territories. However, Mahaweli Authority, Rideemaliyadda office refused to provide any further updates with regard to the project.

Sugarcane production frequently pollutes freshwater ecosystems with farm-washed silt and chemical fertilisers, as well as plant matter and chemical sludge from mills, according to soil experts.

“This zone is highly sensitive due to its high biodiversity. The relevant company, which is carrying out the project, has not carried out a proper Environmental Impact Assessment,” said Mr Dilena Pathragoda, executive director of Center for Environmental Justice.

According to him, Gazelle Ventures agreed to the terms and requested 37,500 acres for sugar cane cultivation.

“The company requested 372 acres in Rideemaliyadda, Dehigama area for the factory and 130 acres for a seed bed.” The Mahaweli Authority has taken over the Forest Department’s land, and rich lands cultivated by farmers from Maha Oya, Padiyathalawa, and Rideemaliyadda are to be given to the company for less than 1% of the shares,” he added.

According to the project report, Gazelle Ventures Pvt Limited has agreed to invest US$152.25 million and it will own 88% of the Bibile sugar factory and IMS Holdings will own 1%.