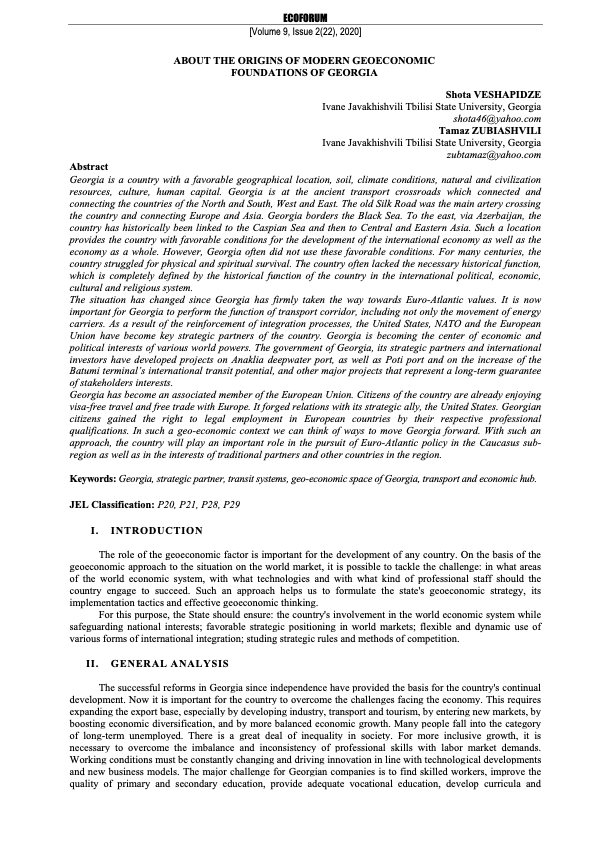 Georgia is a country with a favorable geographical location, soil, climate conditions, natural and civilization resources, culture, human capital. Georgia is at the ancient transport crossroads which connected and connecting the countries of the North and South, West and East. The old Silk Road was the main artery crossing the country and connecting Europe and Asia. Georgia borders the Black Sea. To the east, via Azerbaijan, the country has historically been linked to the Caspian Sea and then to Central and Eastern Asia. Such a location provides the country with favorable conditions for the development of the international economy as well as the economy as a whole. However, Georgia often did not use these favorable conditions. For many centuries, the country struggled for physical and spiritual survival. The country often lacked the necessary historical function, which is completely defined by the historical function of the country in the international political, economic, cultural and religious system.

The situation has changed since Georgia has firmly taken the way towards Euro-Atlantic values. It is now important for Georgia to perform the function of transport corridor, including not only the movement of energy carriers. As a result of the reinforcement of integration processes, the United States, NATO and the European Union have become key strategic partners of the country. Georgia is becoming the center of economic and political interests of various world powers. The government of Georgia, its strategic partners and international investors have developed projects on Anaklia deepwater port, as well as Poti port and on the increase of the Batumi terminal’s international transit potential, and other major projects that represent a long-term guarantee of stakeholders interests.

Georgia has become an associated member of the European Union. Citizens of the country are already enjoying visa-free travel and free trade with Europe. It forged relations with its strategic ally, the United States. Georgian citizens gained the right to legal employment in European countries by their respective professional qualifications. In such a geo-economic context we can think of ways to move Georgia forward. With such an approach, the country will play an important role in the pursuit of Euro-Atlantic policy in the Caucasus sub- region as well as in the interests of traditional partners and other countries in the region.

ECOFORUM is an international, multi-disciplinary, refereed (peer-reviewed) and open access journal aiming to promote and enhance research in all fields of Economics. The journal is conceived and edited by the members of Management, Business Administration and Tourism Department within the Faculty of Economic Sciences and Public Administration, "Stefan cel Mare" University of Suceava.

Areas of Research
Areas of research include, but are not limited to, the following: