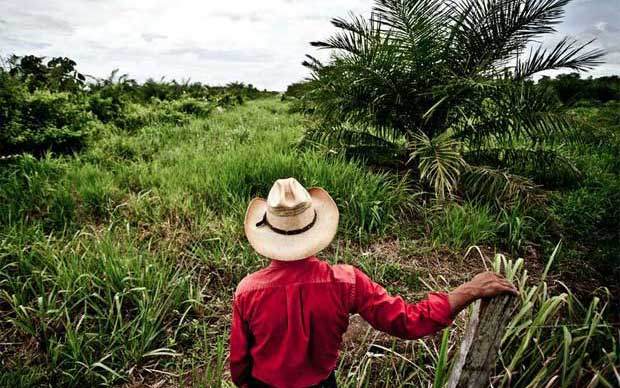 Indigenous farmer in the municipality of Sayaxché, department of Petén, Guatemala, viewing the stunted corn crop on his land bordering an oil palm plantation.

As international negotiations on what constitutes responsible agricultural investment are set to get underway in Rome next month under the auspices of the UN’s Committee on World Food Security (CFS), one in eight people still suffers from hunger.  Food insecurity today is not simply a problem of supply, but rather of access. So the conditions of the investment are what matter most, particularly given that farmers themselves – many of them smallholders – are the biggest investors in agriculture.

The recent rise in demand for globally traded commodity crops (palm oil, soy and corn) has sparked new investments in land for large-scale monoculture. How do these big land-based investments affect small farmers?  In a new report, Smallholders at Risk, Oxfam analyzes three cases in Latin America – in Paraguay, Guatemala and Colombia – to look at how land was acquired and how companies were approaching and developing their agricultural investments, as well as how small farmers and communities were affected.

What stands out most in all three cases is that the particular production model and the specific local context are what primarily determine whether impacts are positive or negative for local populations.

Even though the three agribusinesses involved (Desarrollo Agricola del Paraguay – DAP, Palmas del Ixcan and Cargill) have all publicly stated their commitment to contribute to economic growth and community development in the areas where they operate, Oxfam´s report  indicates that  industrial monoculture is displacing small farm communities, both directly and indirectly, reducing their access to land. This is leading to further concentration of land, as large cattle farms are transformed into mechanized plantations and smallholders sell their land for lack of other options. The end result is that communities are more food insecure, as agricultural commodities compete with family production and heavy use of agrochemicals damages food crops.

The cases in Paraguay and Guatemala show that jobs generated by industrial monoculture tend to be informal and poorly paid, and are mostly seasonal, with fewer new jobs for women than men. Where small farmers were engaged with companies as independent producers, for the most part they still didn’t fare better. The high burden of risk they had to take on, in particular from climate and market conditions, meant that one bad harvest or adverse event trapped them in a cycle of indebtedness from which they couldn’t escape. The start-up capital support farmers received didn’t enable them to overcome the challenges they encountered.

The costs of soy and palm oil

Overall, the cases showed that capital-intensive industrial production has had adverse effects on smallholders primarily because the production model of industrial monoculture for soy and oil palm led to social and environmental costs that disproportionately affected them. This holds true even when considering the philanthropic actions undertaken by all three agribusiness companies, which had some positive effects but did not empower smallholders.

In Guatemala and Paraguay, investments undermined the lives and livelihoods of communities near the plantations. These impacts, however, weren’t simply by-products of the model. They were context specific, contingent on local realities relating to land tenure, government policies and institutions, as well as power imbalances, influenced by history and culture.

In Colombia, Cargill ignored the full context of its land-based investment, and failed to take into account national policies on land distribution and acquisition or to understand the consequences of further land concentration in the country.

The policy, legal and institutional context determines how widely the benefits and costs are shared. So what happens in a context of inequitable access to land, inadequate environmental and labor regulations and enforcement, and a lack of public support to improve small farmer livelihoods? It’s simple: benefits to industrial monoculture tend to accrue to the few who control the investment, while the costs are borne more widely, particularly in local communities.

In sum, the cases provide evidence that monoculture expansion has deepened the concentration of land, wealth and power, displacing local communities, and undermining their rights and traditional livelihoods. Even companies publicly committed to corporate responsibility failed to compensate the social and environmental damages associated with their production model. Efforts to engage small farmers in supply chains led to indebtedness because risk, capital and market imbalances were not addressed.

Responsible investment should result in a net positive outcome for smallholder communities. This requires partnerships that empower small farmers and share benefits and risks in a fair and transparent manner. It also requires adherence to strong principles that should be inherent in a company’s core business model, including respecting national laws and regulations as well as international norms. Above all it requires an active role of governments in ensuring that benefits of investment accrue to smallholders, if agriculture is to help reduce poverty and inequality while contributing to sustainable development.

Hopefully, CFS negotiators will take heed of these and other insights drawn from on-the-ground experiences. Global food security and the livelihoods of the world’s smallholder farmers depend on it.