Since the adoption of the global indicator framework by the UN Statistical Commission (UNSC) back in March 2016, significant progress has been made on a set of tenure-related indicators – familiarly referred to as the ‘land indicators’ – primarily through the efforts of the Global Land Indicators Initiative (GLII). 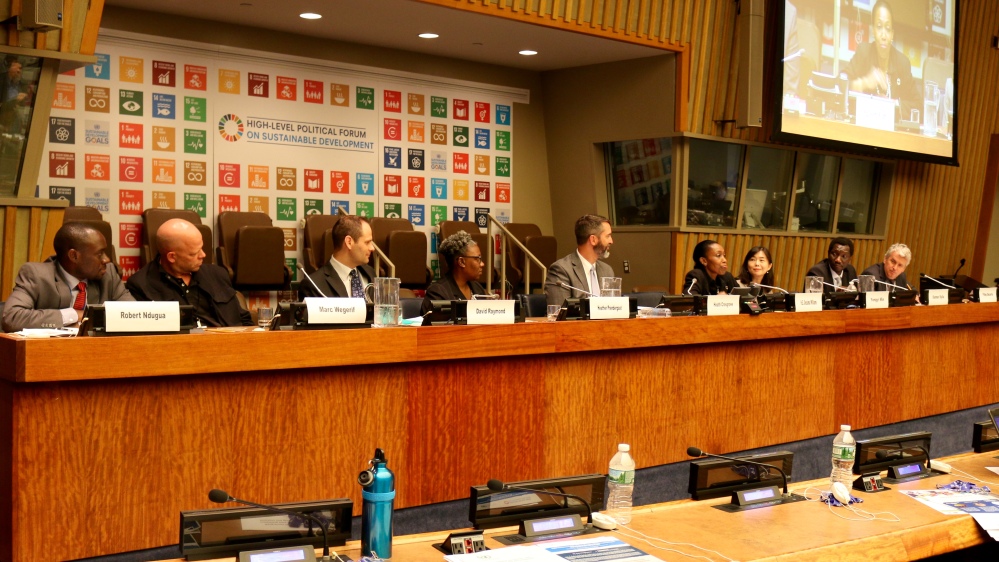 Panelists at the UN High-Level Political Forum (UN-HLPF) Side Event on ‘Land Tenure Security Monitoring in the SDGs’, held July 10, 2017, at the UN Headquarters in New York.

GLII has been described as a collaborative and inclusive process for the development of the land indicators. It was originally convened by UN-Habitat, the World Bank, and Millennium Challenge Corporation (MCC), and is today facilitated by UN-Habitat’s Land and Global Land Tool Network Unit (GLTN).

This initiative has now grown to include more than 50 institutions from across the globe, ranging from UN Agencies and Inter-Governmental Organizations, to International Civil Society Organizations and Academia.

Importantly, the land indicators – once finalized – will serve as an essential tool in monitoring progress on the implementation of the UN Food and Agricultural Organization’s (FAO) Voluntary Guidelines on the Responsible Governance of Tenure of Land, Fisheries and Forests, and the African Union’s Framework and Guidelines on Land Policy in Africa.

In March 2017, the FAO, as custodian agency for SDG indicators 5.a.1 and 5.a.2 – in collaboration with other key global partners – was able to secure the upgrade of indicator 5.a.1 from Tier III to Tier II, and are currently piloting the proposed methodology for indicator 5.a.2.

UN-Habitat and The World Bank, as custodian agencies for indicator 1.4.2, are currently developing a methodology for monitoring tenure security.

The proposed methodology for indicator 1.4.2 explores the use of various household data collection methods, as well as administrative data sources – both of which are known to have their distinct advantages and limitations, as has already been acknowledged by partners of the Global Land Indicators Initiative (GLII) and custodian agencies.

Continued consultations with national statistical offices (NSOs) will be critical to addressing specific limitations, and for consensus on robust, coherent, and complementary proxies for monitoring tenure security.

Issues related to cost, quality control, data gaps, inconsistent metadata, and relevance of the data must be addressed before the convening of the UN Inter-Agency Expert Group on the SDGs in November 2017. GLII partners are therefore keenly awaiting the results of the pilots currently being undertaken in selected cities – a key element in demonstrating the reliability of the proposed methodology, and in facilitating the reclassification of indicator 1.4.2.

The Challenge of Global Reporting on Tenure Security

It is understood that making data collection and reporting on tenure security globally comparable, is not impossible, but it does present a number of challenges, which must be addressed for the most part to inform the UNSC’s metadata requirements on concepts, definitions, methodology, data sources, providers, compliers, and availability.

For example, assessments based primarily on the availability of documented evidence of ownership, are typically oversimplified and can be misleading in the case of countries and regions with diverse property systems.

Similarly, assessments based on perceptions of tenure security may need to consider a diversity of perceptions, as individual behaviors and responses to varying degrees of land tenure security – on the basis of the degree of recognition of land rights, protection against dispossession, and sufficiently extended durations of such rights – are likely to vary across jurisdictions.

Looking at it from the perspective of Payne’s ‘Notional Typology of Land Tenure and Property Rights’, or the ‘Bundle of Rights’, it is understood that rights and responsibilities – and therefore perceptions and behaviours – may vary across jurisdictions, as the legal systems may respond differently to each individual right.

The May 2017 GLII Expert Group Meeting, held in Washington DC, may have addressed this particular issue by simply inserting the caveat that, “Each country must be consulted on the type of documentation that is legally recognized, and the various forms of documentation.”

The perception data – when combined with data on the availability of legally recognized documentation – is critical to understanding how persons are responding to specific land tenure arrangements, and why. The core questions identified for indicator 1.4.2 at the Washington DC EGM will allow us to do just that.

Additionally, once GLII in collaboration with the World Bank, UN-Habitat’s Global Urban Observatory, and other GLII partners can effectively address the specific limitations of administrative data – such as quality control, data gaps, inconsistent metadata, and relevance of the data – such data can in many instances ease the burden (cost, time, logistics, etc.) of undertaking comprehensive household surveys.

The big question however remains: How do we address these limitations on a global scale? This will require significant technical inputs from National Statistical Offices, with technical and financial assistance coming from the relevant custodian agencies.

Units of Analysis for Reporting on Indicator 1.4.2

Mr. Oumar Sylla, Unit Leader at UN-Habitat’s Land and Global Land Tool Network Unit (GLTN), reminded participants at the UN-HLPF Side Event on ‘Land Tenure Security Monitoring…’, of the progress made on the land indicators since GLII’s establishment in 2012.

The conversation has nonetheless gone beyond the question of the efficacy of measuring perceptions on land tenure security, as the perception data alongside data on clearly defined land tenure arrangements is known to be essential to our understanding of how people and communities are responding to specific tenure scenarios, and why.

In a recent online forum convened by GLII in collaboration with Land Portal, land tenure experts and stakeholders were invited to share their ideas for measuring perceptions of tenure security, or more specifically, measuring the “Proportion of total adult population […] who perceive their rights to land as secure…”.

The forum however focused on just 1 of 5 units of analysis extracted from indicator 1.4.2 – the others being:

Importantly, our understanding of how people are responding to specific forms of tenure along a continuum of land rights – and why – hinges on our ability to reliably capture and link perception and tenure-disaggregated data. This requires that we accurately define each tenure form identified within local tenure typologies.

In a study undertaken as part of my doctoral research on the Southern Caribbean island of St. Vincent, I sought to identify the range of tenure forms that constituted the tenure typology of four rural communities on the south-west of the island that had been severely impacted by a major flood event in December 2013.

Preliminary studies had already revealed key details regarding land governance and land tenure locally, which facilitated the framing of the questionnaire. Among the categories assessed, was ‘Land Tenure’.

Five distinct tenure forms were identified within the study area – Freehold Tenure, Rent, Family Land, Squatting on Government Land, and Tenancy at Sufferance – with those persons responding “Other”, being coded as “Tenants at Sufferance” based on their descriptions of their living arrangements.

The application of the complete methodology, that incorporated a series of questions and analyses, resulted in a local representation of the continuum of land rights for the study area.

Proposals were then made for incremental improvements to the legal recognition of individual tenure forms along the tenure chain, taking into consideration the necessary changes to local procedural law, tenure administration, and the requisite institutional and regulatory frameworks. This approach was essential for evaluating individual tenure forms, and the processes for moving from one tenure form to another.

It is therefore reasonable to suggest that reporting on indicator 1.4.2 is perhaps best served by a combination of data on perception, Legally recognized documentation, and data that clearly defines the individual tenure forms constituting local tenure typologies.

Participants at the GLII Expert Group Meeting on ‘Securing Women’s Land Rights in the SDGs Monitoring Framework’, held in Manhattan, New York, on the heels of the UN-HLPF 2017.

Having successfully hosted two expert group meetings and a well-attended side event at the UN High Level Political Forum – featuring a high-level panel of presenters – between July 6th and 10th, GLII Coordinator, Everlyne Nairesiae, will be fancying her chances of securing the reclassification of SDG indicator 1.4.2 from Tier III to Tier II at the next Inter-agency Expert Group on SDG Indicators (IAG-SDGs) meeting scheduled for Manama, Bahrain, November 11-14.

It goes without saying, that significant progress has been made on the political, conceptual and methodological aspects of the land indicators since inception – this, notwithstanding the fact that there remains a significant amount of work to be done in each respect.

What we can be assured of however, is that come November, our eyes and ears will be firmly affixed to deliberations in Manama – the outcome of which will either give us a reason to celebrate GLII’s extraordinary efforts over the last five years, or a firm directive back to the drawing board.

This blog was originally published by Jamal Browne.

Agenda 2030 makes it possible for countries to monitor the proportion of the total adult population with secure tenure rights to land. This indicator focuses on two components of tenure security that work to advance the concept of the continuum of tenure rights: