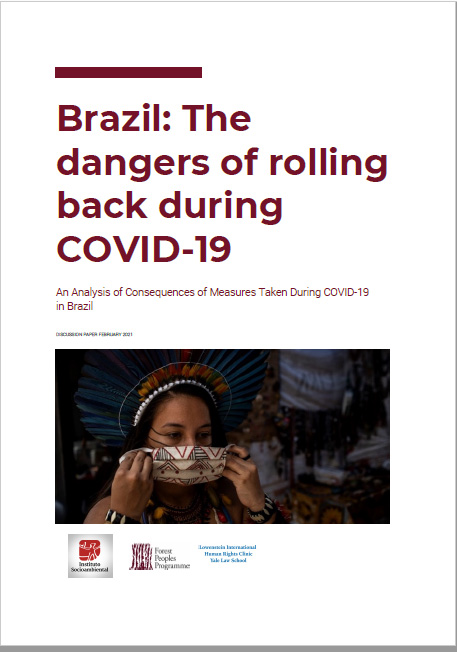 Over the last several years, the Brazilian government has rolled back environmental and social protections, threatening ecosystems such as the Amazon rainforest and the livelihoods of indigenous peoples and traditional communities. The dismantling of inspection and protection programmes in indigenous territories coupled with political neglect towards the formal demarcation of indigenous lands or the strengthening of public policies to safeguard traditional ways of life has led to social, physical and cultural vulnerability for indigenous peoples. The Amazon region, the main focus area of this report, has also suffered its highest rates of deforestation and fires in recent decades.

With the outbreak of the new coronavirus pandemic, the threats facing traditional peoples and their territories have intensified. Guided by a denialist discourse regarding the seriousness of the pandemic and the appropriate methods for coping with it, such as social isolation, the government of current President Jair Bolsonaro has not adopted effective measures to slow the spread of COVID-19among indigenous peoples and traditional communities. On the contrary, the government has acted with impunity towards increases in invasions, illegal exploitation of natural resources, and land grabbing in indigenous peoples’ territories. This impunity has resulted in greater exposure to the virus and consequently to the deaths of many hundreds of people. Moreover, the Bolsonaro government has intentionally and proactively exploited the pandemic to further its economic agenda at the expense of indigenous peoples’ rights.

As illustrative case studies of national-level problems, this report focuses in on two indigenous peoples’ communities located in the Middle Xingu River basin in the region of Volta Grande do Xingu. This region is also home to dozens of endemic species of ornamental fish and rich biodiversity. For  over a decade, the people of the Volta Grande do Xingu region have been impacted by the construction and operation of the Belo Monte Hydroelectric Power Plant. The plant’s operation has caused an 80% reduction in the natural flow of the Xingu River in this stretch that is home to several indigenous lands and hundreds of riverside families and communities engaging in traditional fishing and farming. The reduction in water flow poses a serious risk to the food security of these peoples, leading to a decrease in fish supply, the main food staple for families, and water for irrigation. These existing vulnerabilities have been compounded by the emergence of the new coronavirus pandemic, and conflicts between indigenous peoples and Belo Monte have worsened during the crisis.

Despite facing adverse situations, indigenous peoples, traditional communities and civil society organizations have been working to reverse the government’s environmental and social rollbacks and defend indigenous territories, rights, and forest ecosystems. Some examples of these collective and interinstitutional movements are described in this report with the aim of highlighting solutions to these serious problems that affect the entire planet, given the Amazon’s critical role in the fight against global climate change. For the sake of humanity’s survival, it is essential that the tractional knowledge of indigenous peoples who live in harmony with their ecosystems is considered a guide for decision-making by international organizations and national governments.

Forest Peoples Programme supports the rights of peoples who live in forests and depend on them for their livelihoods. We work to create political space for forest peoples to secure rights, control their lands and decide their own futures.

COVID-19
Pueblos indígenas
Related content:
Rolling back social and environmental safeguards in the name of COVID-19