It was good land. Before the company’s arrival in 2011, the people of Ngovokpahun village had used it to grow cocoa and other cash crops to help them pay for their children’s education. But when Italian Agriculture offered to build them a school, health center, and roads, provide them with employment, and pay rent, leasing out the land seemed like the wiser option. The company drafted the agreement and the landowners signed.

More than 5 years later, Italian Agriculture had not fulfilled a single promise. There was no school, no health center, no roads, and no jobs. What is more, without the consent of the people, the company took and destroyed the community’s only recreational ground for its own use.

While the company cultivated the land, they rarely paid for it on time or in full. “Our cocoa, coffee and cola nuts were gone, and the rent not forthcoming,” explains Madam Mamie, a landowner and chair of the village council. Without the income from the crops or the rent, she and the other parents in the village struggled to pay their children’s secondary school fees.

The community repeatedly tried to resolve the issues but the company “made no effort” to address their concerns. “We felt disillusioned,” says Madam Mamie.

Disillusioned but not defeated, the landowners called Namati Sierra Leone’s toll-free legal advice line. After a number of discussions, it became clear to Namati that the situation required more support than could be provided over the phone. Namati’s community paralegals arranged to hold a series of legal literacy sessions, with all of Ngovokpahun’s youth and adults in attendance.

After explaining the relevant laws and policies that regulate land and agricultural deals in Sierra Leone, the paralegals guided the community through a review of the terms of their lease agreement. Together they discovered that the rent the company paid fell far below the government-recommended rate, that the promised school, roads, health center and jobs were not captured in the document, and that the company had altered the number of hectares in the agreement after it had been signed. Infuriated, the Paramount Chief described the company’s action as fraudulent.

The community paralegals assisted the landowners in writing a letter to the company. They laid out their grievances with reference to the law and requested a meeting. This time, Italian Agriculture agreed. 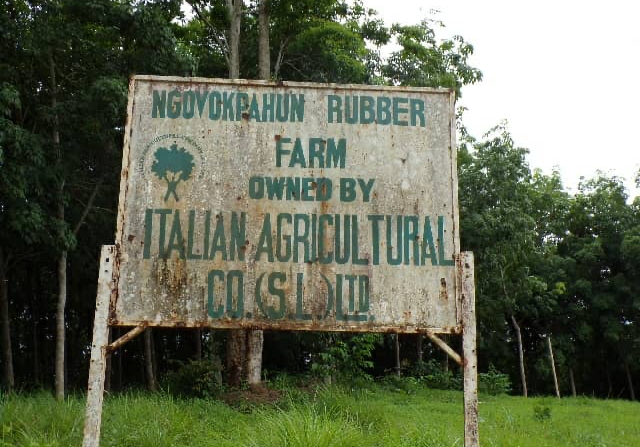 The landowners and village chief arrived at the meeting accompanied by Namati and armed with copies of the laws and legal documents. They re-stated their grievances to the senior company officials gathered and pointed to discrepancies between the lease and government policy. They demanded that these issues be addressed and a new lease negotiated that reflected what the parties had actually agreed upon.

When they concluded, the CEO remarked how impressed he was with their level of legal awareness. He then went on to take responsibility for the alterations to the lease document, explaining that his company had conducted another round of surveying which gave them the new figure, and acknowledging that the exercise should not have been done without the knowledge and involvement of the landowners and local authorities.

“I was surprised at the hospitality and positive behavior of the company staff,” recalls Madam Mamie. “These once defiant people were respectful this time.” But as she sees it, they did not have much of a choice. “The argument was put to rest after the CEO read the provisions. He had no option but to accept to do things as per the law and lease.”

At a second meeting, held in the village, the two parties agreed on a set of plans and targets for remedying the wrongs. The CEO unreservedly accepted the community’s demand to re-survey the concession area with full community participation and promised that the company would investigate the missed rent payments, and clear up all arrears when they mutually ascertain the actual land size being used. He also agreed to reconstruct the recreational field and negotiate a new lease.

The process that followed was not without its challenges, but with the paralegals’ support and the law in their hands, the people of Ngovokpahun village have resolved the nearly decade-long injustice. By the end of 2020, the land had been re-surveyed, all rent arrears paid, a recreational field built, and negotiation of a new lease — one that protects the rights and interests of the community and all its members — begun.