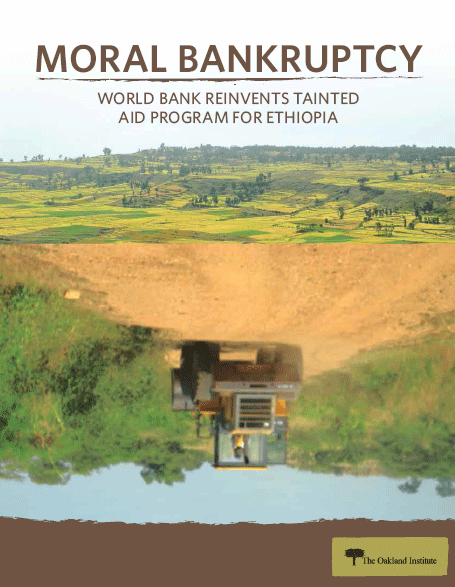 On September 15, 2015, the World Bank announced US$600 million of financing for a new initiative in Ethiopia, Enhancing Shared Prosperity through Equitable Services (ESPES). Its purported aim, like its predecessor, the Promoting Basic Services (PBS) program, is expanding access to basic services such as water, education, and healthcare.

The PBS has been associated with human rights abuses and the forced relocation of indigenous communities while paving the way for land grabs. Yet, rather than addressing the concerns raised about the program, the Bank has just launched an almost identical initiative under a new name.

Reports by The Oakland Institute and human rights organizations have demonstrated widespread human rights abuses associated with the PBS program. In 2012, the Anuak people of Gambella, Ethiopia filed a complaint with the World Bank’s Inspection Panel stating that the PBS program was linked with the Ethiopian Government’s villagization program, which was forcibly evicting indigenous communities to make their land available to foreign investors.

In early 2015, the Inspection Panel released a scathing report after examining these allegations. The report concluded that indeed, an “operational interface” between the villagization program (known as the “Commune Development Program” or CDP) and PBS had formed in regions like Gambella where the two programs were concurrently rolled out.

A close examination of the ESPES program, in light of the Inspection Panel findings, raises major concerns.

First, ESPES uses the same block grant system as the PBS program to transfer funds from the Government of Ethiopia (the recipient of World Bank funding) to the woredas, where basic services are provided. The Inspection Panel confirmed several serious issues with this system, including the potential for World Bank funds to be diverted away from the PBS program and used to roll out the villagization program.

The proposed mechanisms to resolve these financial issues in the ESPES are insufficient.

Second, so-called “improved” systems for assessing and mitigating social risks associated with ESPES rely heavily on community engagement and self-reporting by severely marginalized communities. This ignores the fact that the rampant misuse of the country’s laws, such as the 2009 Anti-Terrorism Proclamation, has created a culture of fear and intimidation in Ethiopia,6 rendering these mechanisms
useless.

Third, the agencies tasked with monitoring and evaluating the ESPES program are government agencies, which lack independence, and are thus incapable of providing protection to vulnerable peoples from social harm.

Finally, the above concerns, combined with further findings from the Inspection Panel, fail to address the renewed possibility for World Bank projects to have “operational interfaces” with problematic programs of the Ethiopian Government in the future.

The vote of the US Treasury in favor of the ESPES program also raises serious concerns. In accordance with several pieces of legislation, from the US Appropriations Bills of 2012 through 2016, the US Treasury should not have voted in favor of this program, both on account of forced evictions and inadequate safeguards for indigenous groups.

The new World Bank financing for Ethiopia through ESPES is nothing more than a renaming of PBS, which continues to ignore the grave concerns associated with the program and human rights abuses in the country. In addition, by voting in favor of this program, the US Treasury is in violation of the requirements set out by the US Congress. Despite solid evidence of forced displacements and widespread human
rights abuses, the US Treasury and the World Bank have chosen a business-as-usual approach in Ethiopia, while once again failing truly vulnerable communities in the country.