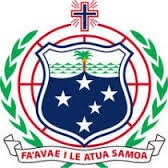 New Zealand occupied the German protectorate of Western Samoa at the outbreak of World War I in 1914. It continued to administer the islands as a mandate and then as a trust territory until 1962, when the islands became the first Polynesian nation to reestablish independence in the 20th century. The country dropped the "Western" from its name in 1997.

Samoa is a parliamentary republic.

This Act amends the Village Fono Act by inserting a new section 2A stating the objects of the Act and by inserting provisions and amending other provisions on the registration and administration of villages and the limitation of jurisdiction of Village Fono (in particular in respect of Government, freehold or leasehold land located within village land).

This Act continues District Courts established under the repealed Act as subordinate Courts of record, and those courts shall be constituted, empowered, administered and staffed in accordance with this Act.

This Act amends the Lands, Surveys and Environment Act 1989 with respect to grant a lease of government land and allotment of such land without competition. It also concerns consent by the Land Board to dealings with leases.