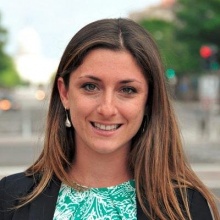 Yuliya Panfil is a senior fellow and director of New America’s Future of Property Rights program.  Prior to joining New America, Panfil worked at Omidyar Network, where she sourced and managed property rights investments. Prior to joining Omidyar, Panfil was a land governance and legal advisor at USAID, where she oversaw USAID’s responsible land-based investment practice and led USAID’s private sector and donor engagement on land and property rights issues. She previously worked as a corporate lawyer at White & Case, LLP where she focused on capital markets transactions as well as several land rights and indigenous rights projects for the United Nations and other organizations.

Panfil began her career as a journalist for Miami Herald and has also written for the Washington Post, Miami Herald, USA Today, New York Daily News, Newsday and the South Florida Business Journal. Panfil holds a law degree from Columbia Law School and a bachelor’s degree in journalism and international studies from Northwestern University.

Last week the World Cocoa Foundation, a membership organization of more than 100 cocoa companies, held its annual partnership meeting in Berlin, Germany. The aim of the meeting is for governments, cocoa companies and farmers to identify and tackle the sector’s largest sustainability challenges. A 90-minute session was devoted to the topic of land tenure. The prominence of the session, as well as the seniority of the presenters – the Head of Sustainable Sourcing for Hershey’s and the Deputy Director General of Cote d’Ivoire’s Land Agency among them – is a powerful signaling effect.

Welcome to 2019. In San Francisco, commuters shuttle to work in self-driving Ubers. In Rwanda, drones deliver blood to patients. In China, Xiaomi released a $500 phone that allows users to map the world with 30 centimeter accuracy.

And yet, a quarter of the world’s population lacks a fundamental human right: the right to property.

On Nov. 13 in Bahrain, the Inter-Agency Expert Group on the Sustainable Development Goal Indicators voted to reclassify SDG Land Indicator 1.4.2 from Tier III to Tier II status.  This is a significant win for the property rights community, and a validation that a coordinated effort from many different players can indeed make a difference.

However, the road there was not easy.