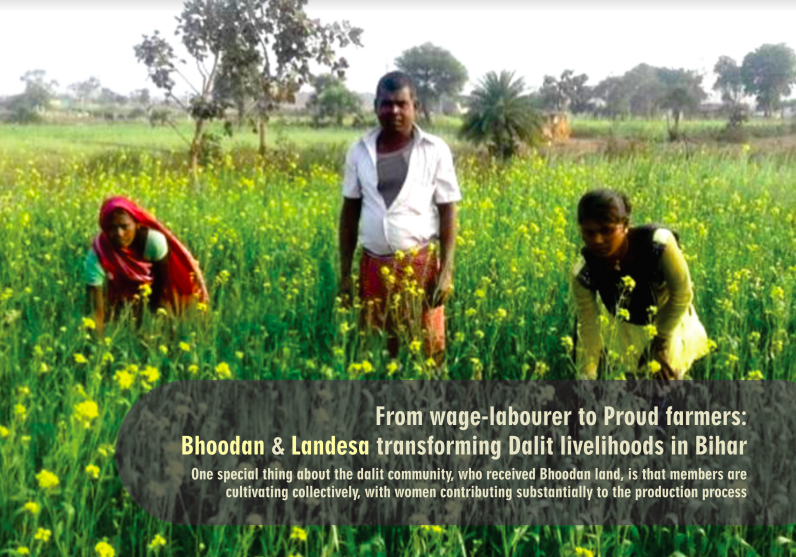 In the Kohbari village at Vinobapuri Tola, located in Barachatty block of Gaya district, there are 35 beneficiaries including 33 women and 2 men who have received their Praman Patra from the Bhoodan Yagna Committee on the 12th of May, 2018. The members of the Musahar community were settled on the land a very long time ago, but have been unable to receive their land titles. Landesa facilitated the distribution of land titles to these families by conducting meetings with the Bhoodan Yagna Committee and Revenue Officials. The Landesa team also helped the community to file an application to receive the the land title from the Bhoodan Yagna Committee. Ultimately these families did receive their land titles; however the land title receipt is still pending due to legal issues which are still to be resolved in the court.  Progress is being followed by the Revenue Board, as the Bhoodan committee has been dissolved. Each of the 35 beneficiaries has received 1 acre of land and they have already started cultivating the land. The traditional irrigation facilities available in the village have made cultivation possible for them. They have produced paddy in the last season and presently have sown wheat and oil seeds following the mixed cropping method on their land. One special thing about the community is that community members are doing the cultivation in a collective manne. They divide into groups and share the cultivation work, and women are also contributing very much in the process of production. Landesa has had discussions with these communities and found that the crops they produce are now enough for their food security for the entire year. As of now, they have been taking loans from local money lender and are bearing the cost of cultivation; however Landesa has plans to help them to be linked with various government schemes once they get their lan   title receipts from the Circle Office.

Ramrati Devi along with her husband Lakhan Manjhi, their two sons and two daughters, are happily cultivating the land received from the Bhoodan Committee. They have not only sown wheat and oil seeds, but are also producing potatoes on a patch of the land. Similarly other beneficiaries are also engaged in kitchen gardening on their own land. The kitchen garden developed by them are providing green vegetables, fruits etc. for their own consumption. In this way the whole community is moving away from the label of “wage labourer” and now can be termed “farmers”.

Finally, the land titles given in the name of women have improved the status of women in their community and have enhanced the sense of security among them. Landesa hopes that soon, they will become self-reliant and will break free from the constraints of daily wage labour work.