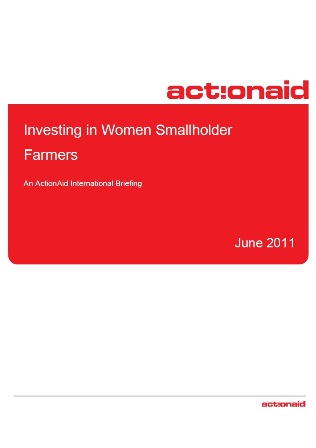 [From the Executive Summary] Many poor communities depend on women to grow most of the food they eat, yet women farmers struggle with a severe lack of extension services, credit, inputs, and productive assets. Merely by ensuring women farmers get the same access to these resources as men, the G20 could lift 100 million people out of hunger.

It’s time for the international community, including G20 governments, international organisations, and the Committee for World Food Security (CFS)to meaningfully confront world hunger by acknowledging the many irreplaceable roles played by women farmers in ensuring food security. To facilitate rather than undermine their work, they should:

1. Recognise women are farmers and support interventions which specifically focus on their unique circumstances. These should include: public credit and financial services; guaranteeing secure access, use and control over good quality agricultural land and other productive resources, including appropriate seeds; and targeting women smallholders through agricultural research and extension services. In order for policies and programmes to succeed, they need to incorporate an understanding of women’s multiple roles in food provisioning as well as help address gender constraints at the household and community level through empowering women smallholders.

2. Set specific and measurable targets for actions on women farmers into policies and spending plans. Gender-targeted budgeting in support of policies which aim to address women’s needs must be allocated according to explicit goals if gender is to be more than a buzzword in budget documents. This must be supported by an increasing share of public budgets and agricultural aid that supports women farmers. Ensuring this spending is addressing and reaching the needs of women will also require the use of tools such as gender data collection, and monitoring of sex-disaggregated data.

3. Act quickly to provide the material support for country-owned initiatives that prioritize smallholders and women farmers which has already been promised by the G8 and the G20. The accountability report released at the G8 Summit in May 2011 revealed that many countries are failing to maintain the commitments they made under the Aquila Food Security Initiative (AFSI) at the 2009 G8 Summit. The promising Global Agriculture and Food Security Program (GAFSP), developed as a vehicle for new AFSI contributions, is likewise seriously under-funded. The G20 has endorsed both AFSI and GAFSP, and must take steps to
encourage more G20 members to commit and provide funds in 2011.