Gender equality in Burundi: Why does support not extend to women's right to inherit land? | Land Portal
Skip to main content 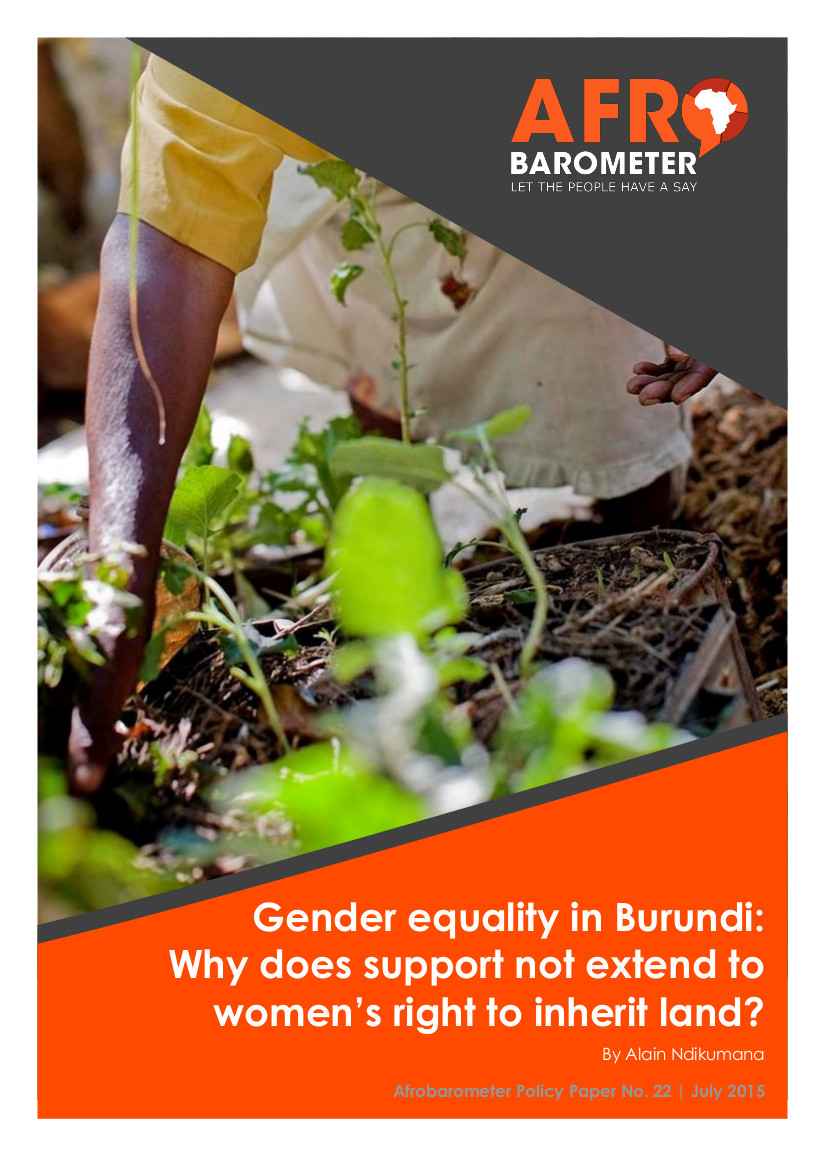 With 27,834 km² of surface area and a population of 10.5 million, Burundi’s population density is seven times that of Tanzania and second only to Rwanda’s on the African mainland (World Bank, 2014). Its population grows at an annual rate of 2.4%, and more than 90% of the population lives primarily on agriculture.

These factors make land a vital and scarce resource in Burundi, leading to frequent conflicts and particular complications in questions of inheritance (Kazoviyo & Gahungu, 2011). The situation is even more problematic for women and girls, who traditionally inherit nothing from their fathers. In Burundi, women’s right to inherit land faces the triple barriers of demography, tradition, and the law.

Promoting gender equality and especially women’s right to inherit land is a major focus of women’s-rights activists. Although Burundi has signed and incorporated in its constitution most international instruments promoting gender equality, women’s succession rights do not yet have full legal protection. Since 2004, government legislation on women’s inheritance laws awaits consideration by the National Assembly. “But problems related to the scarcity of land and overpopulation seem to veil the face of leaders who end up believing that a law on female succession would be a problem rather than a solution” (Kazoviyo & Gahungu, 2011, p. 1).

Even if the proposed law is passed, evidence suggests that gender inequality in access to and control over land will remain a problem. Burundi’s legislation is based on international agreements and laws enacted by the government. However, there are shortcomings in the regulation of natural resources and the management of land because Burundi has no national land code. In the absence of national texts, local customary rules based on a patriarchal system govern family land and women‘s access to and inheritance of land. This system recognizes women as usufructuaries (i.e. entitled to use land that belongs to another) but not as heirs. Such social norms are so entrenched among the local population that most women in rural communities view ownership of material assets, such as land, as being exclusive to men (Carpano, 2011). Without a concerted education effort and diligent implementation of new land laws, many women may not know their legal rights, implementation may be gender-biased, and law enforcement may be grossly inadequate or prejudiced against women. In Kenya, for example, laws allow women to own land, yet nearly all land is registered in the names of male elders (Odeny, 2013).

A project in Rwanda, implemented by the Rwanda Initiative for Sustainable Development, showed the effectiveness of awareness-raising activities at public and government levels regarding land rights and land registration. Rwanda’s Organic Land Law, which governs land management and administration, states that “women, married or not, should not be excluded from the process of land access, land acquisition and land control, and female descendants should not be excluded from the process of family land inheritance” (Republic of Rwanda, 2004). Both men and women were informed about their rights under the law and about the benefits of registration in terms of security of rights and livelihoods (Carpano, 2011). The National Land Centre estimates that between 2008 and June 2010, 1 million out of 8 million parcels of land in the country had been registered.

Afrobarometer’s first survey in Burundi, in 2012, provides insights regarding public attitudes toward gender equality. Findings show that majorities of Burundians support women’s rights in general but reject land inheritance by women. This paper examines factors that might contribute to these apparently contradictory views and offers recommendations on how to promote dialogue, sensitization, partnerships, and capacity development in support of women’s land rights in Burundi.