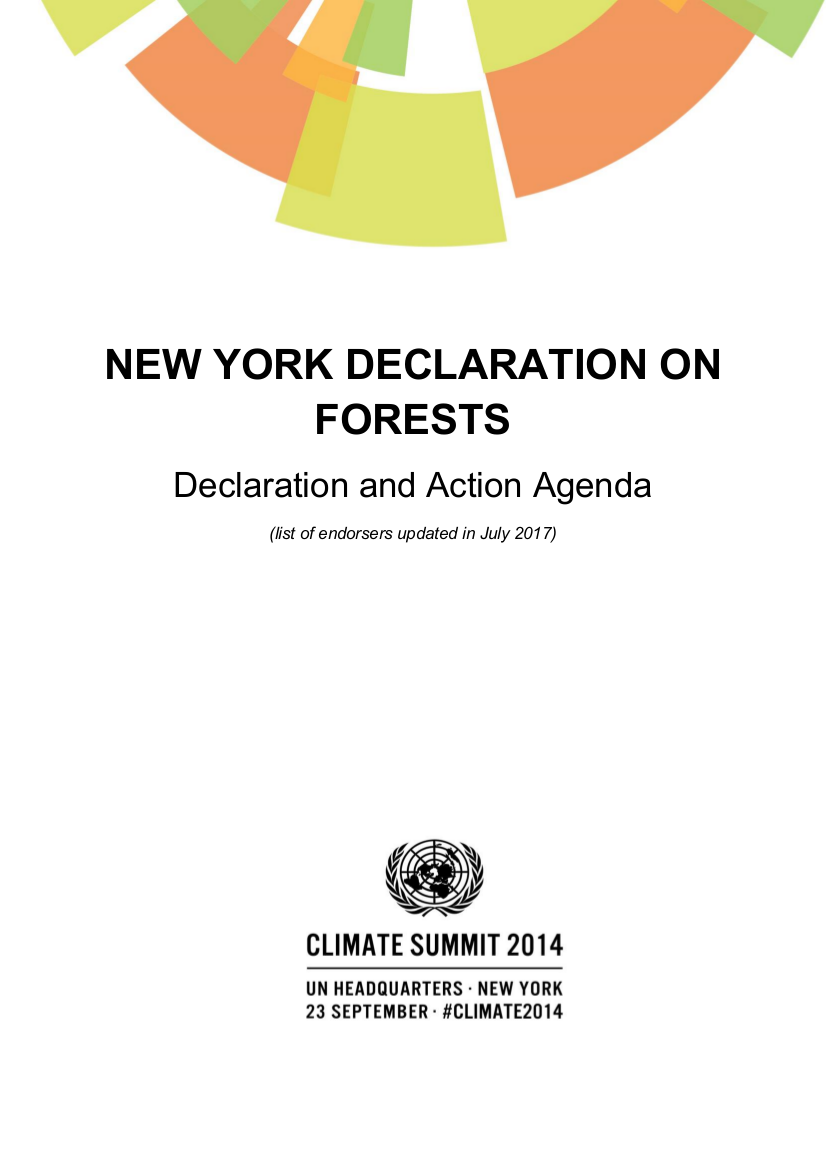 This document summarizes the wealth of announcements on forests at the UN Secretary-General’s Climate Summit, including the New York Declaration on Forests, its associated voluntary Action Agenda, and a large number of supportive concrete action announcements.

The New York Declaration on Forests (Section 1) is a non-legally binding political declaration that grew out of dialogue among governments, companies and civil society, spurred by the SecretaryGeneral’s Climate Summit. For the first time, world leaders endorse a global timeline to cut natural forest loss in half by 2020, and strive to end it by 2030. It also calls for restoring forests and croplands of an area larger than India. Meeting these goals would cut between 4.5 and 8.8 billion tons of carbon pollution every year – about as much as the current emissions of the United States. The Declaration is endorsed by dozens of governments, [30] of the world’s biggest companies, and [more than 50] influential civil society and indigenous organizations.

The associated voluntary Action Agenda (section 2) serves as a guide to governments, companies, and organizations regarding the diverse set of actions that can achieve these transformational goals. It is not meant to be comprehensive.

The entities endorsing the NY Declaration announced dozens of concrete actions and partnerships to demonstrate their commitment to implement the New York Declaration and Action Agenda. Some of these highly specific supplemental commitments demonstrate the new political will building for forest conservation and restoration, and are summarized in section 3.This includes commodity traders calling for public policies to eliminate deforestation, a pledge by indigenous peoples to protect hundreds of millions of hectares of tropical forests, new commitments from forest country governments to reduce deforestation or to restore degraded lands, new bilateral and multilateral programs to pay countries for reduced deforestation over the next six years and new procurement policies for several of the largest forest commodity importer governments.

The Declaration comes at a critical time for the world’s forests – in the midst of a radical transformation of commodity sectors, and six months before countries are asked to present their nationally determined contributions to the climate convention. Jointly, countries, companies, indigenous leaders and civil society have staked out a vision for success.

UNDP works in some 170 countries and territories, helping to achieve the eradication of poverty, and the reduction of inequalities and exclusion. We help countries to develop policies, leadership skills, partnering abilities, institutional capabilities and build resilience in order to sustain development results.

UNDP works in some 170 countries and territories, helping to achieve the eradication of poverty, and the reduction of inequalities and exclusion. We help countries to develop policies, leadership skills, partnering abilities, institutional capabilities and build resilience in order to sustain development results.