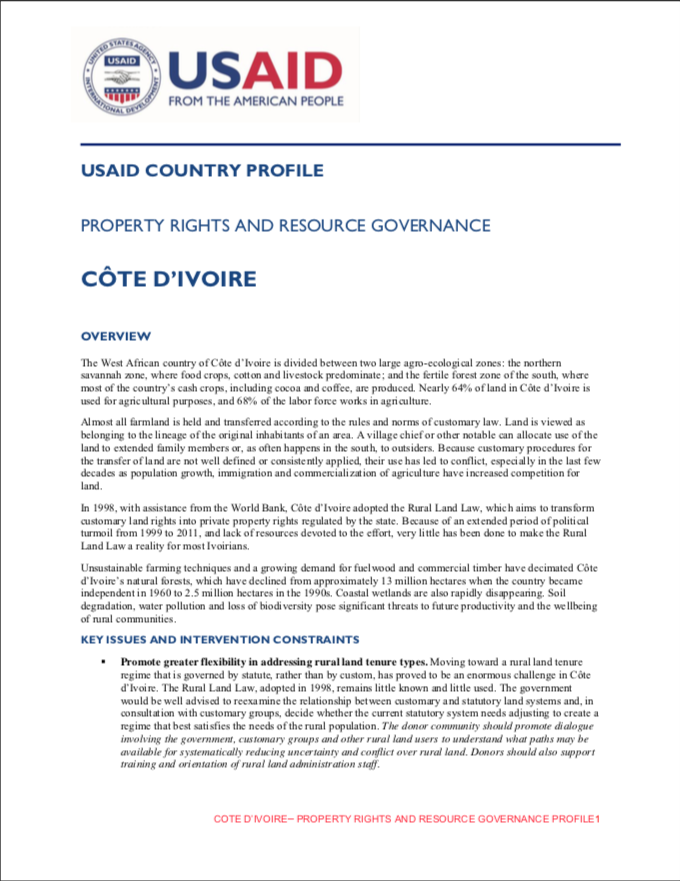 The West African country of Côte d’Ivoire is divided between two large agro-ecological zones: the northern savannah zone, where food crops, cotton and livestock predominate; and the fertile forest zone of the south, where most of the country’s cash crops, including cocoa and coffee, are produced. Nearly 64% of land in Côte d’Ivoire is used for agricultural purposes, and 68% of the labor force works in agriculture.

Almost all farmland is held and transferred according to the rules and norms of customary law. Land is viewed as belonging to the lineage of the original inhabitants of an area. A village chief or other notable can allocate use of the land to extended family members or, as often happens in the south, to outsiders. Because customary procedures for the transfer of land are not well defined or consistently applied, their use has led to conflict, especially in the last few decades as population growth, immigration and commercialization of agriculture have increased competition for land.

In 1998, with assistance from the World Bank, Côte d’Ivoire adopted the Rural Land Law, which aims to transform customary land rights into private property rights regulated by the state. Because of an extended period of political turmoil from 1999 to 2011, and lack of resources devoted to the effort, very little has been done to make the Rural Land Law a reality for most Ivoirians.

Unsustainable farming techniques and a growing demand for fuelwood and commercial timber have decimated Côte d’Ivoire’s natural forests, which have declined from approximately 13 million hectares when the country became independent in 1960 to 2.5 million hectares in the 1990s. Coastal wetlands are also rapidly disappearing. Soil degradation, water pollution and loss of biodiversity pose significant threats to future productivity and the wellbeing of rural communities.