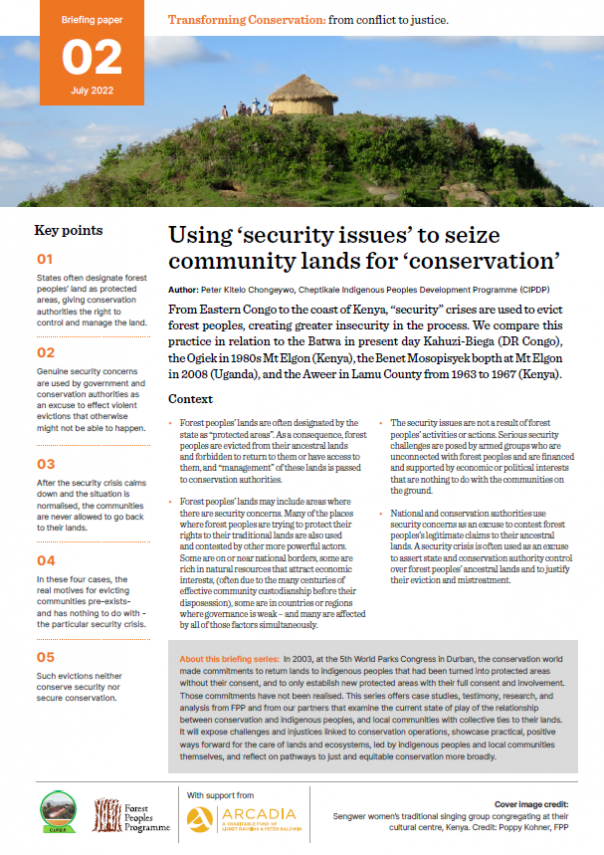 From Eastern Congo to the coast of Kenya, “security” crises are used to evict forest peoples, creating greater insecurity in the process. We compare this practice in relation to the Batwa in present day Kahuzi-Biega (DR Congo), the Ogiek in 1980s Mt Elgon (Kenya), the Benet Mosopisyek bopth at Mt Elgon in 2008 (Uganda), and the Aweer in Lamu County from 1963 to 1967 (Kenya).

Forest peoples’ lands are often designated by the state as “protected areas”. As a consequence, forest peoples are evicted from their ancestral lands and forbidden to return to them or have access to them, and “management” of these lands is passed to conservation authorities.

Forest peoples’ lands may include areas where there are security concerns. Many of the places where forest peoples are trying to protect their rights to their traditional lands are also used and contested by other more powerful actors. Some are on or near national borders, some are rich in natural resources that attract economic interests, (often due to the many centuries of effective community custodianship before their disposession), some are in countries or regions where governance is weak – and many are affected by all of those factors simultaneously.

The security issues are not a result of forest peoples’ activities or actions. Serious security challenges are posed by armed groups who are unconnected with forest peoples and are financed and supported by economic or political interests that are nothing to do with the communities on the ground.