The state’s high cost of living and tourism-focused development is making it difficult for some Native Hawaiians to keep their homes.

Joddy ʻIwalani Manuwai and her family will lose their ancestral home in Kailua, on the island of O’ahu in Hawaiʻi, if they don’t raise $1 million to buy back land that has been theirs for five generations ― and they only have until Thursday to do it. Otherwise, their only hope is convincing a judge to give them more time.

“I don’t know anywhere else,” said Manuwai. “This is where we’re planted, where we grew up.”

More than a decade ago, the Manuwais decided to remodel their home to fit their growing family. But their contractor didn’t complete the job and ― as they later found out ― what he did finish wasn’t up to code. They were left with depleted finances and an unfinished, unpermitted house prone to flooding.

The situation snowballed, said Manuwai’s daughter, Kaʻiulani. They tried to get the right permits and keep up with the mortgage. Then they had to pay off credit card debt they racked up in the process.

“It was either we have water or we pay the mortgage,” said Kaʻiulani. “We had to shower and eat, so my parents chose water.”

Last year, the Manuwais tried to refinance. A close friend referred them to a financial adviser with experience in mortgage loan modifications, and they took the necessary steps they believed would allow them to keep their home. Months later, they were informed that the refinance never occurred; the adviser had taken their money and refused to return it. The Manuwais were left with no way out of the debt their family had sunken into. The house went into foreclosure.

Kaʻiulani says she and her family have been “victims of predatory lending from the beginning.” But they have few options. Their original lender went under and their loan was sold from bank to bank, with the interest rate increasing each time.

The Manuwai family needs $1 million to buy their home back from the bank, but they’re only one-quarter of the way there. Instead, on Thursday, they will go before Judge Jeannette H. Castagnetti at the First Circuit Court in Honolulu and ask for more time to save their home. If the judge denies the family’s request, the bank will be solidified as the new owner and the family will have to leave the home.

“It’s impossible for me to wrap my head around that concept that I’m not going to have a place to come to,” said Kaʻiulani. “Everything that we are is there. I don’t want to accept the fact that that means nothing. It’s been our puʻuhonua. It’s been our sanctuary.” 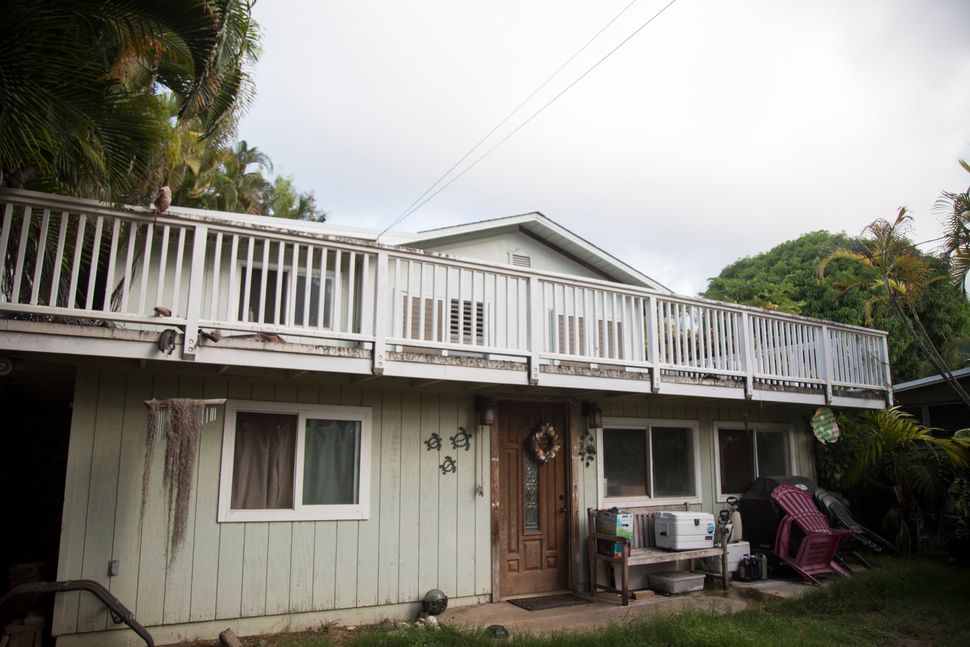 The Manuwais’ story is part of a much larger housing and land rights struggle underway in Hawaiʻi, from the Protect Mauna Kea movement to ongoing displacement of Native Hawaiians. The soaring cost of living and the relentless onslaught of tourism-focused development are making it impossible for Native Hawaiians to keep their homes. Every native home lost becomes yet another vacation rental as investors sweep in to build new multimillion-dollar properties.

According to Hawaiʻi News Now, foreign investors acquired about $841 million worth of properties within the first nine months of 2018. “It’s good news for the construction workers, architects and attorneys and so on. But it’s certainly adding to our local resident housing shortage,” said Mike Sklarz, CEO of Collateral Analytics, in the article.

The minimum hourly wage needed in Hawai’i to afford a home — $36.82 an hour for a “modest apartment” — is the nation’s highest, according to the National Low Income Housing Coalition’s latest report. Yet the state’s minimum wage is only $10.10 an hour. These trends are part of the reason Hawai’i also has one of the highest rates of homelessness in the country. Native Hawaiians make up about 42% of the state’s homeless population. In 2000, homes in Kailua that sold for $50,000 or less are now assessed at more than $1 million.

Kailua was once a stop for Hawaiian royalty as they traveled Oʻahu, a place with bountiful agricultural resources and a pleasant climate. Over the years, Kailua transformed into a sleepy beach town. When local beaches were named some of the island’s best, the town’s popularity and housing prices began to rise. Recent data from the Hawaiʻi Tourism Authority finds that as much as 15% of the homes in Kailua are now vacation rentals. 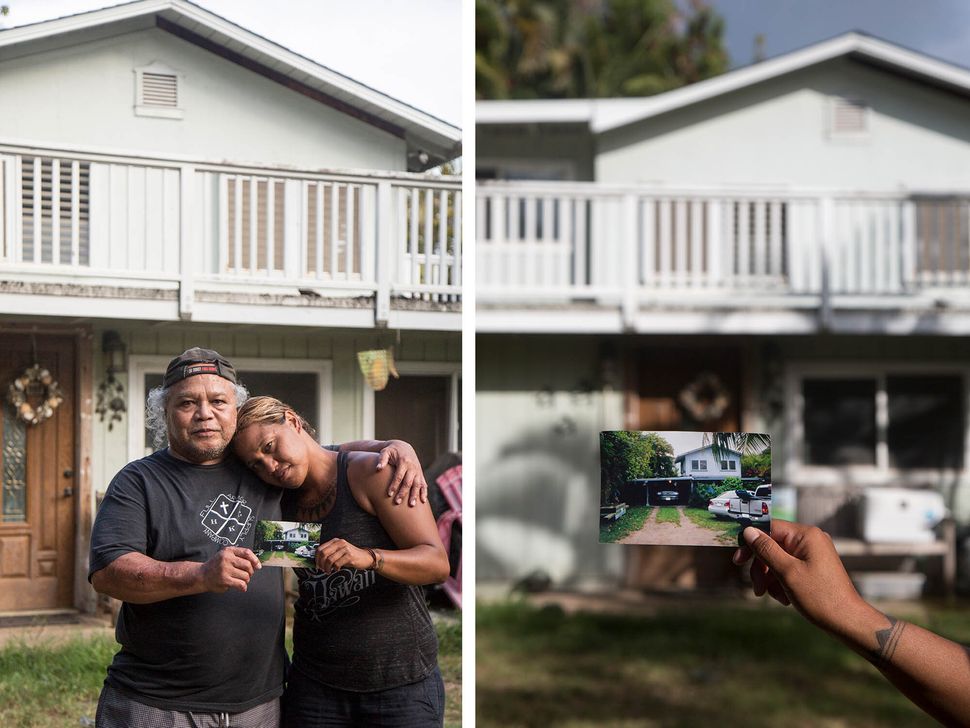 With the rise in prices came an influx of illegal vacation rentals, gentrification and tourism. Kailua is now almost unrecognizable for longtime residents. These dramatic changes have even earned the town the nickname of ”Kailuafornia.”

Reflecting on when Kaʻiulani and her siblings were kids, her father, Steven Oiph, remembers the small town being empty and united. This issue is also affecting local business owners in Kailua. Longtime business staples such as Agnes’ Bakery, Andy’s Drive-In, and Craig’s Bakery have been replaced after decades in Kailua. For Muʻumuʻu Heaven owner Deb Mascia, property owners Alexander & Baldwin tripled her rent from $6,000 a month to $18,000 a month in 2015.

“I have no doubt that somebody’s going to come in and they’re going to take it and bed-and-breakfast it,” said Joddy Manuwai of her home. “And that just kills me to know that they’re going to do that to the land that was promised to us.”

Everything that we are is there. I don’t want to accept the fact that that means nothing.Kaʻiulani Manuwai

The changes are already affecting the younger generation in Kailua. “My friends that I grew up with, that I went to high school with, their goal was to go away for college and come home,” said Kaʻiulani. “And then they realized that the reality is it’s going to be too expensive for them to come back.”

“My great-grandma was pure Hawaiian. She was born during the time that it was very shameful to be Hawaiian,” Kaʻiulani said. At home, they could speak the language and embrace their cultural heritage, she said, “but outside of the walls, they couldnʻt talk it.”

An old photograph of the Manuwai family in the yard of their Kailua home.

Joddy pulled out photos of Kaʻiulani with their dog, Kilo. But the remembering was also painful; she’s taken to sleeping in her office, where she works as a therapist in the heart of downtown Kailua. “I donʻt want to be stuck in the memories,” she said. “I cannot be over there. My heart hurts to be there.”

It’s much more than property. “Itʻs a generational thing,” said Kaʻiulani. “Itʻs not just ʻāina,” she said, using the Hawaiian word for land.

In August, the family decided to share their story publicly on social media and started a GoFundMe campaign to raise $1 million ― funds they hope are enough to outbid developers, cover legal costs and take care of their debt. They have been overwhelmed with the outpouring of support, but it has been hard to be so open about their struggle. “Shame is massive,” said Kaʻiulani. “It’s the reality and I can’t walk through it by myself and neither can my parents.”

The family members hope that in sharing their story, other Native Hawaiians facing similar issues can speak out, too. “We have to stand up and we have to say something because somebody else out there may be facing something that like we do today,” said Oiph. “If they hear this, maybe they can start to believe that things can change for the better.”