Indigenous leaders from around the world are heading to the COP26 United Nations climate summit this weekend, where one of the main topics on their agenda will be highlighting community land tenure as an often-overlooked way to mitigate climate change.

Research demonstrating that granting Indigenous peoples and forest communities formal titles to their lands as a cost-effective approach to tacking climate change has been piling up for years. Two new reports released on Oct. 27 by the World Resources Institute and the PRISMA Foundation add to that growing body of work.

“No [climate] initiative can succeed if rights are not recognized,” said Mina Setra, deputy to the secretary-general of the Indigenous Peoples Alliance of the Archipelago (AMAN), an organization with more than 2,400 affiliated communities throughout Indonesia.

Setra and other Indigenous leaders will join government officials, scientists, activists, and NGO representatives at the 13-day summit in Glasgow, Scotland, that kicks off on Oct. 31.

While government officials will be the ones at the negotiating table, COP26 will feature a slew of parallel events, street protests, campaigns and proposals. The flurry of activity has already begun, with global events leading up to the summit.

In its newly released report, WRI, a nonprofit research organization based in Washington, D.C., presents insights from recent research illustrating how securing land and forest rights of Indigenous peoples and other local communities (IPLCs) prevents deforestation and destruction contributing to climate change.

“The science is now so far advanced, it’s pretty irrefutable,” Peter Veit, director of WRI’s Land and Resource Rights initiative and the lead author of the report, told Mongabay in an interview. “There’s no excuse for not securing IPLC lands in your country. The challenge now is that we need to act on the evidence that exists.” 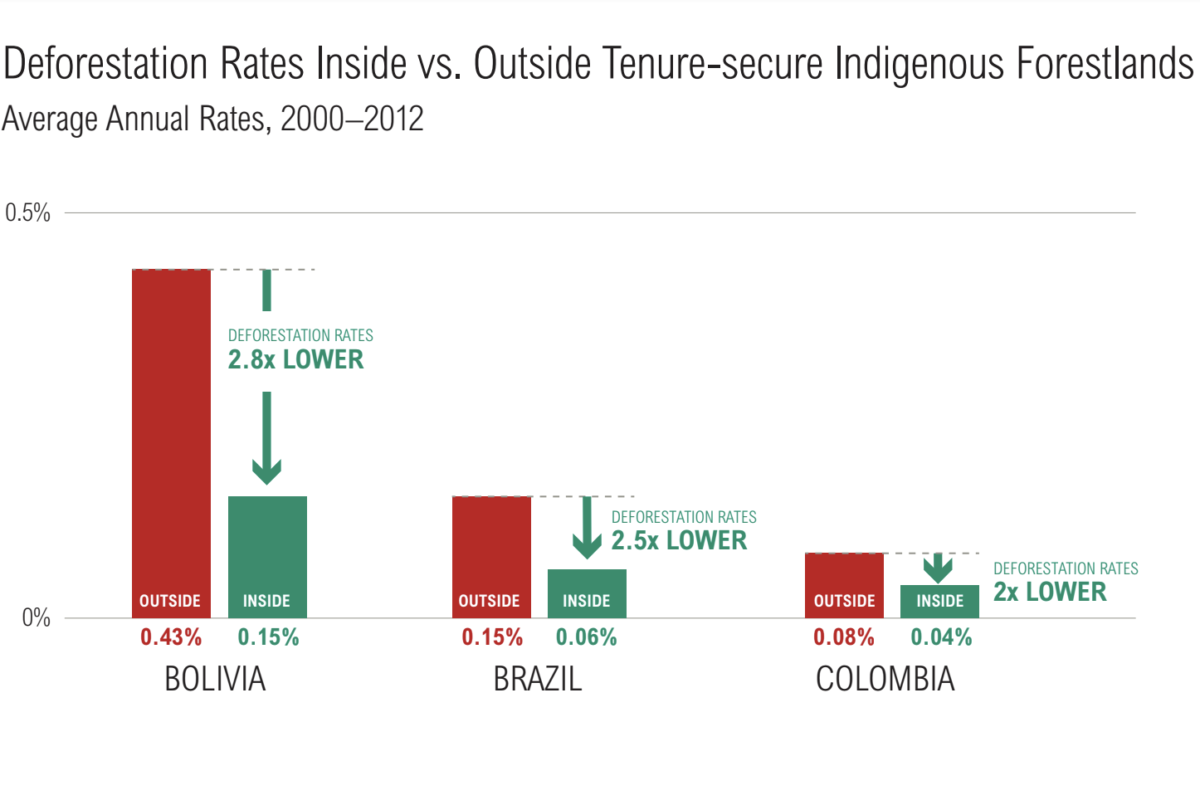 The report highlights that Indigenous lands alone hold more than a third of the planet’s large swaths of natural forests and an estimated 80% of the world’s biodiversity. Deforestation rates in Indigenous territories in the Amazon are two to three times lower than in similar non-Indigenous lands across several South American countries.

But although at least half the world’s land falls within IPLC territories and holds most of the world’s biodiversity, only 10% of IPLC land is recognized as such by national governments. Recent studies have shown that titling Indigenous and Afro-descendant lands in some regions of South America reduced deforestation by 30-75%. Securing land tenure is a cost-effective climate mitigation strategy, according to the report.

“Our hope is that the climate community recognizes the role of IPLCs and the critical role that tenure security plays,” Veit said.

Last September in Marseille, Indigenous rights organizations and activists who took part in the “Our Land, Our Nature” congress developed a manifesto calling for a total halt to new protected areas that displace IPLCs. Titled the “Marseille Manifesto: a people’s manifesto for the future of conservation”, 50 signatories seek to assert the role of Indigenous land tenure in environmental protection and criticize the Convention on Biological Diversity’s (CBD) Post-2020 Global Biodiversity Framework target safeguarding 30% of land and ocean through exclusionary protected areas.

“[The manifesto] appears at a critical juncture, when the only solutions put forward to the climate and biodiversity crises are business as usual, in particular more protected areas and the commodification of nature,” said Fiore Longo, head of Survival International’s conservation campaign. 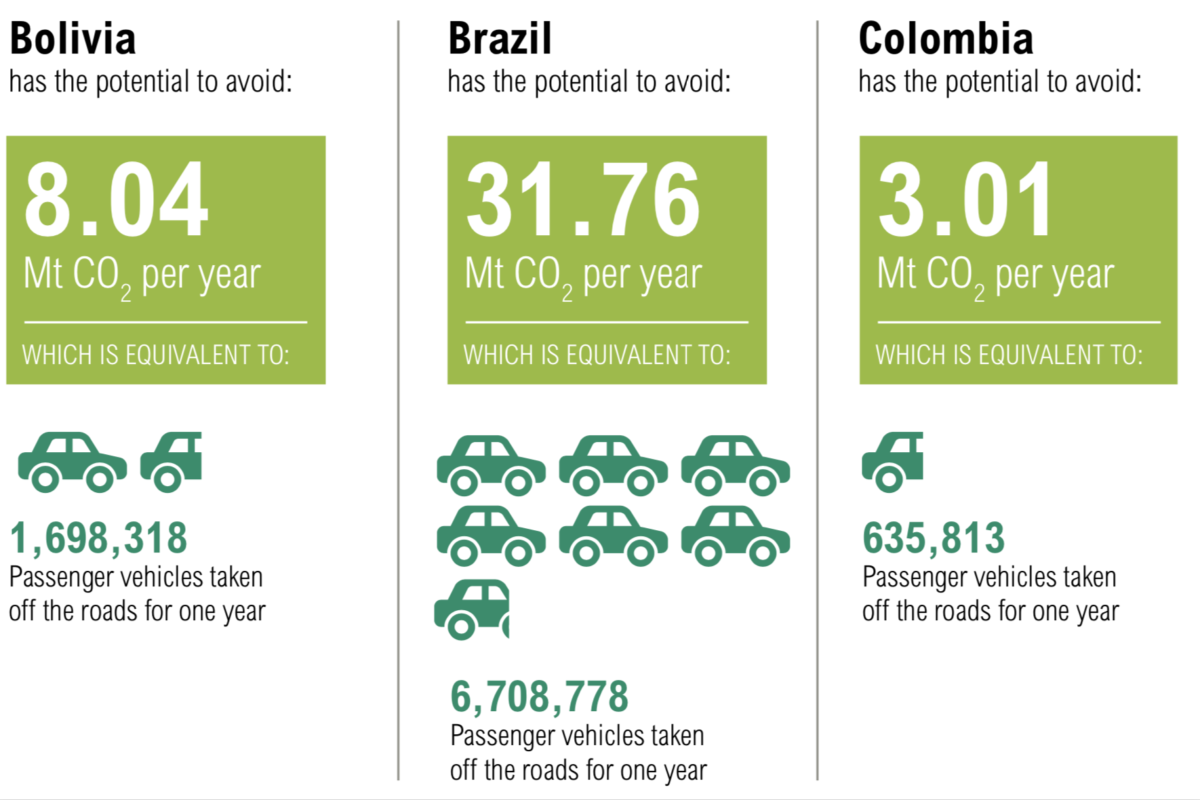 Sara Omi, an Indigenous women’s alliance leader from an Emberá community in eastern Panama, will be pushing for Indigenous land and forest rights, as well as local community support, once again in Glasgow, her fifth U.N. climate summit. She told Mongabay she has seen gradual progress in Indigenous participation and recognition at the international conferences.

“I think that at each conference things have moved forward little by little,” Omi said. “Advocacy is more and more visible every summit, but it has not been an easy task.”

Emberá-Wounaan territory, the land of the Emberá and Wounaan peoples, is legally recognized in Panama. However, the government has yet to fulfill obligations to address invasions of Indigenous lands that undermine the legal rights the community has received. Deforestation is much more than a matter of carbon emissions to local communities.

“When we lose forest, we also lose traditional knowledge and medicine,” Omi said, adding she also wants to see more climate financing actually reach communities on the ground. “The resources do not make it to the territory.”

Getting climate funding to communities on the ground

Addressing the critical point of funding is the focus of another new report, this one from the PRISMA Foundation, a nonprofit regional environmental and development research organization based in El Salvador.

Indigenous and local community territories hold roughly a quarter of global carbon but receive only a tiny fraction of global climate financing, the PRISMA report says; the WRI report also highlights this issue. The $2.7 billion disbursed between 2011-2020 to IPLC land tenure and forest management represents less than 1% of official designated assistance for climate change, and less than 5% of official designated assistance for general environmental protection. Only a small share of this assistance likely went to IPLC communities on the ground. 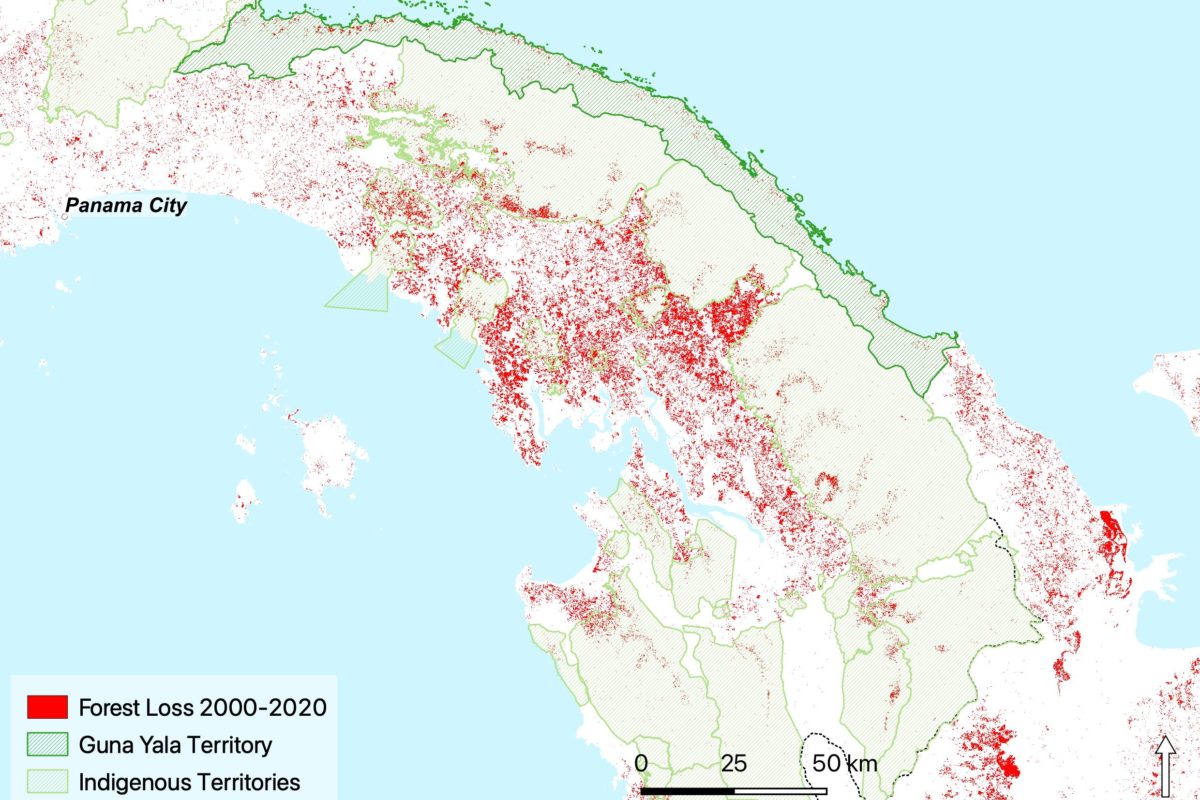 Map comparing forest loss in Panama between 2000-2020 in regions inside and outside Indigenous territories. Image courtesy of Rainforest Foundation US.

The PRISMA report calls for a “reimagining” of the global climate finance framework, arguing that programs and financing mechanisms have been largely top-down when they need to be bottom-up.

“The lion’s share of the money has been captured at higher levels, amongst international NGOs, consulting firms, technical experts, and government agencies: only 10% of total climate finance is committed to local levels,” noted the report authors.

“Communities are already organizing,” Andrew Davis, one of the PRISMA Foundation researchers who co-authored the report, said in an interview with Mongabay. “Financing [needs] to be reaching the ground in a way that is aligned with local people’s priorities.”

The way donors manage risk and the lack of accountability in the system creates bottlenecks, he said, preventing resources from reaching communities that are both vulnerable to the impacts of climate change and in a critical position to help mitigate the phenomenon.

“There really needs to be a kind of fundamental change in the climate finance architecture,” Davis said.

When funding does make it through, donors often continuously cherry-pick the same projects instead of directing finance to Indigenous-managed regional initiatives that provide direct support to local community organizations setting new efforts up and running.

“The most important thing for international donors to do is to get to know the territories,” Davis said. 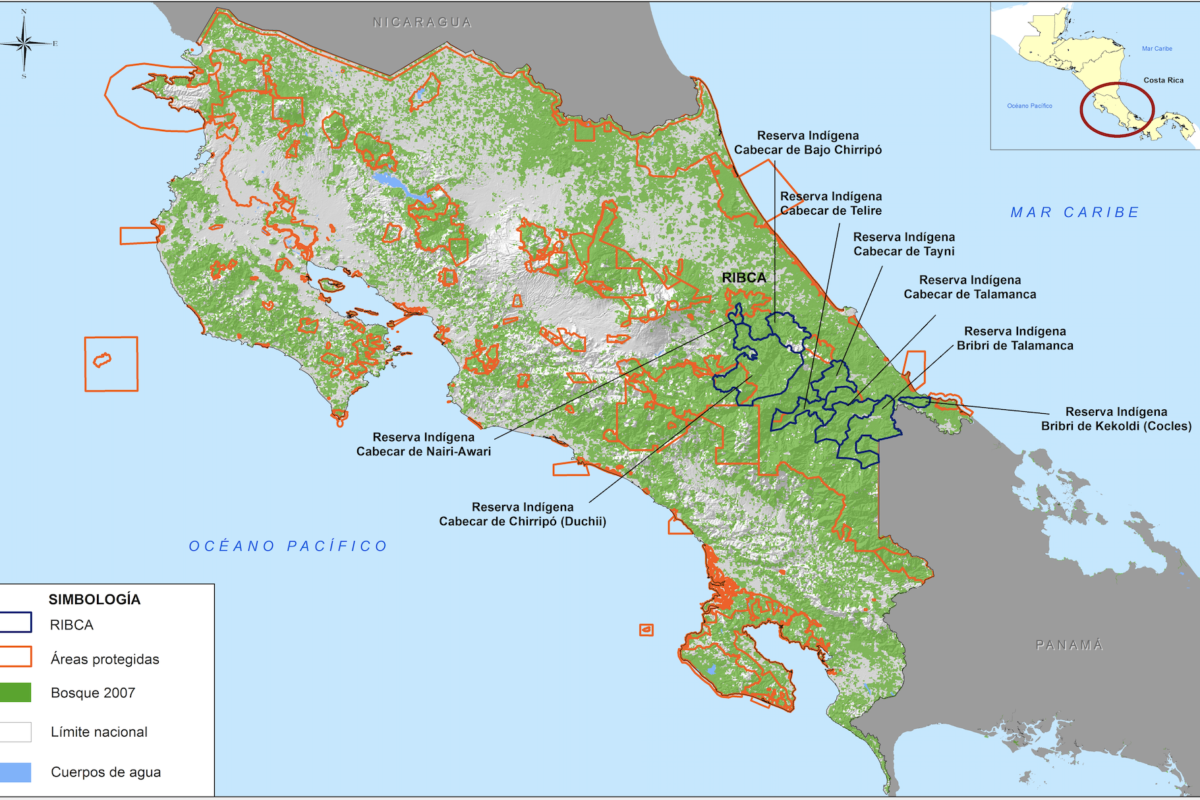 Map of Costa Rica comparing forest cover inside and outside Indigenous reserves and protected areas. Image courtesy of PRISMA Foundation.

Back in Indonesia, Mina Setra has seen the research out of South America and said she expects future research in Indonesia to help yield similar results. Indigenous communities in different regions also have local traditions that mandate sustainable agriculture and the seasonal closures of forests, fisheries and other natural resources to allow for regeneration, she said.

“We can develop actions based on our culture and our traditional knowledge,” Setra said, adding that with formal recognition of land and forest tenure, “we can do even more because communities will be able to scale up their actions.”

Setra is alarmed that the COP26 may view the carbon market as an inevitable solution. She said everyone starts off on the same page when talking about the climate emergency in discussions, but by the end it’s all about carbon prices.

“We see that everything is leading up to the carbon market. That really worries us,” she told Mongabay.

Indigenous peoples and organizations have diverse perspectives on carbon offset schemes, often under the umbrella of the U.N.’s reducing emissions from deforestation and forest degradation program, or REDD+. These schemes are centered around efforts to confer financial value on the carbon stored in forests. Some Indigenous groups are active participants, while others have mixed opinions of what they see as trying to offset harmful practices that contribute to climate change in the first place. Setra’s organization, AMAN, holds a position that ties securing Indigenous rights to approval of REDD+ programs: “No rights, no REDD+.” Setra said she expects the organization will maintain that stance when it comes to the carbon market through a need to cater to business interests.

Indigenous leaders have been trying to bring their contributions and rights to climate talks since the first World Climate Conference in Geneva in 1979, and the first U.N. climate summit, or COP1, in Berlin in 1995. What began as a handful of Indigenous representatives protesting at conference doors to participate in negotiations has gained increased visibility and recognition over the years. The last five COPs saw the adoption of the Local Communities and Indigenous Peoples Platform (LCIPP) and a work plan to showcase to state parties and decision-makers the roles and contributions of Indigenous peoples, with a few shifting countries championing their proposals.

However, Indigenous advocacy at the global climate conferences still sometimes entails standing outside closed-door meetings, side events and restaurants to wait for official delegates to come out and get Indigenous proposals in their hands.