As companies extract wealth, villagers say they see little benefit and are instead exploited in quarries, live in homes damaged by blasts and are unable to farm polluted land

A convoy of trucks laden with huge black granite rocks trundles along the dusty pathway as a group of villagers look on grimly.

Every day more than 60 trucks take granite for export along this rugged road through Nyamakope village in the district of Mutoko, 90 miles east of Zimbabwe’s capital, Harare.

The air reverberates with blasts and heavy machinery noises as the mountain above the village is slowly reduced, slab by slab. Quarrying has been happening here since the 1980s.

Mutoko stone is sought after for its lustre. It is a popular material for tombstones. An extension to the Danish royal library in Copenhagen, known as the Black Diamond, is clad in Mutoko granite.

The Buja people who live here say that as mining companies extract wealth from the mountain, they leave behind a trail of damaged roads and bridges, hazardous pollutants and dirty air. Cracks can be seen on houses and blast debris is everywhere.

These companies do not respect communities. If the government does not protect us, then where will we get the protection we need? Claudine Mupereri

Now 50 families in the village have been told by a Chinese mining company that they will have to leave their homes and land. People in four other villages in the district fear they will also lose their ancestral lands.

Two families, including an 82-year-old villager and his wife, have already been relocated by Jinding mining company, which wants to build a polishing plant.

“The 82-year-old man collapsed when he heard the news because he never anticipated it. He was later resuscitated at the hospital. This is how bad things are here,” says Claudine Mupereri*, 38.

She says the man was told his house was within the area licensed to the mining company by the government. Zimbabwe’s Communal Areas Act gives the president power to decide the use of an area that makes up 40% of the country’s land, home to about 70% of the population.

“These companies do not respect communities. If the government does not protect us, then where will we get the protection we need?” says Mupereri.

Two other families were given $2,500 (£1,840) to rebuild their homes, but community leaders say this is insufficient.

“There is uncertainty around this village. Right now, we do not have anyone willing to help us because our councillor does not want to help us. Anyone who dares to speak out is threatened. Whether they remove us or not, we are already scared to speak out,” says Anesu Nyamuzuwe*.

The 40-year-old father of four fears losing five hectares (12 acres) of land, his only source of income.

“I have a good farm with fertile soil. My farming always meets my household requirements. I had built a good home and I am close to Mutoko centre, so I am not sure if I will ever get such a piece of land again,” he says.

“What is more important, investors or the villagers? We should have the right to reject these people from entering our community.”

Jinding mining company in China could not be reached for comment.

A manager and interpreter at the company’s plant in Mutoko says families who live within the 500 hectares the company is licensed to mine will be relocated, but adds: “the people who are giving out the claims [to mining companies] have a problem. Why are they giving them [companies] so much land? This land is almost 500 hectares, I am sure they already know that people live in this place.”

Zimbabwe has enjoyed a close relationship with China for decades. But the bond between the two countries solidified when western states imposed economic sanctions on Robert Mugabe’s government. As credit and investments dried up, China stepped in.

In 2018, Zimbabwe-Chinese relations were elevated from “all-weather friends” to strategic partners, paving the way for Chinese investors to pour money into the country, particularly in the extractive industries, where they have been accused of paying little attention to environmental damage by environmental and human rights activists.

Those living near granite mines say companies are failing to restore the land after extraction. Open pits are left uncovered, endangering children and wildlife.

Zimbabwe’s government has been accused of turning a blind eye to complaints because, critics say, it doesn’t want to anger its biggest investor.

Mineworkers speak of poor working conditions. At another mine in Mutoko, workers give accounts of beatings and poor pay.

“Imagine going to work every day for over 12 hours and getting $50 at the end of it all. When I get home I am tired. My home knows no peace,” one worker tells the Guardian.

“My friend was beaten with a steel rod and another 17-year-old boy had his arm broken after coming to work late. He was given $250 as compensation after villagers complained.”

In 2020, two workers were shot and wounded in Gweru, central Zimbabwe, allegedly by a Chinese miner after a quarrel over salaries.

Evelyn Kutyauripo, a paralegal with the Zimbabwe Environmental Law Association (Zela), who has been rallying villagers in Mutoko to resist evictions, says local officials need to protect people.

“I blame the headmen and the councillors because they are working with the Chinese. They should stand with the community,” she says, adding that companies were taking from communities and not helping them develop.

“They are not developing anything in the community. They should have a strong corporate social responsibility because they are killing our environment. We are suffering, our houses are cracking and there is pollution. The government should come to see what is happening.”

Last year, the company was reportedly given a government licence to mine granite on tracts of land belonging to local people.

“I hear they want to remove us so that they take the rock, which is underneath, but the people do not want to. They will have to use guns to remove us here,” says Gladman Murape*, 34.

Richard Ncube, a legal officer at Zela, says people in Mutoko were “extremely worried” about evictions. “The major challenge is they are living in the dark, and they are not sure what is going to happen.”

He said people were too scared to challenge the company. “We have gathered that most of the communities [in Mutoko] are afraid to come forward and take these matters to court due to intimidation and fear of being victimised,” says Ncube.

Attempts to challenge the mining companies elsewhere in Zimbabwe have had mixed results.

In November, Heijin mining company lost its mining licence in Murehwa, a district about 55 miles from Harare, after local leaders complained to the government that the company planned to evict locals.

In 2020, Zela was involved in the successful fight to overturn licences to mine coal in Hwange national park, the country’s largest national park, home to 40,000 elephants. Following protests, the government banned mining in all its national parks.

However, in September, hundreds of people in Chikomba district, 80 miles south of the capital, were evicted from their ancestral homes to make way for a $1bn iron and steel mining project.

The Zimbabwe government says it has not received any reports of abuse of workers in Chinese-owned mines, but it did encourage workers to report any incidents. 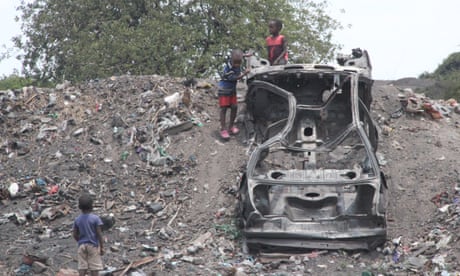 What burns beneath: the deadly threat of underground coal fires to children in Zimbabwe

Deputy mines minister, Polite Kambamura, urged villagers to approach the ministry if they had problems.

“We haven’t heard of any Chinese company which has relocated people in Mutoko. If villagers are not happy, they may approach our provincial mining office in Marondera or come directly to the ministry,” he says.

“We understand that if ever there is a company that wants to relocate the people, they should engage the community, to buy that social licence from the community.”

Kambamura adds that an environmental impact assessment – to ensure the environmental, social, economic and cultural issues related to any mining project are considered before it begins – must also be conducted by the company and should address any concerns.

The Chinese embassy in Zimbabwe did not respond to numerous requests for comment. Mutoko leaders were also approached for comment.